There was no central sewage system in Balangoda city. Therefore, every citizen living in the city discharged sewage to a pit on the ground in direct contact with the soil. This caused pollution in natural underground water sources and eventually causing health issues in the citizens. As a solution for this, the urban council introduces septic tanks to the citizen but the capacity of them was not enough to manage the discharge. This action caused a chain reaction that eventually made the situation worse and polluting more underground water reserve and the river flow through the city that was used for agricultural and general consumer purposes. The biggest barrier for the urban council to implement a proper solution for this was the huge expense that needed to be born. Also driving a drastic behavioral change in the community was a massive challenge that needed to be undertaken.

We wanted to research a low-cost solution for these challenges which would include a simple technology so that it would be easier to drive a behavioral change. Based on my training regarding fecal sludge facility management, which was held in Korea, I was able to develop a solution that would fit the criteria. Another problem we had at the same time was providing water for the compost production project in the Urban Council. We decide to look at these two problems at the same time and create a combined solution. We collaborated with other local authorities in the country to study their projects to create a basic system. Nuwaraeliya Municipal Council had a primary treatment system, and basic ideas were generated through that. We introduced our own solutions to the bottlenecks in that system so that it could be adapted to our local authority. For example, introducing simple solutions like using lemongrass oil to reduce the smell was effective in building a pleasant appeal to the project among the general public. We built a compound tank system to purify the water that can be used for compost production. Using solutions to increase the effectiveness of the tank system allowed us to facilitate the capacity of the fecal sludge produced in the system. The best thing about this is by using natural solutions as much as possible, we were able to create a minimal environmental effect.

By openly dumping human excreta, methane is produced due to anaerobic reactions. Our treatment plant is constructed with the capacity to treat daily sewage of 15000 liters. By this project, we were able to eliminate the production of 15 tons of methane per day. The demand for co-compost produced using the purified fecal sludge was higher than the normal compost as it has more nutrients, and it was very successful for agricultural purposes. With this product, we were able to reduce the usage of chemical fertilizer in cultivations around the country. This helped to increase waste collection in the city. We reduced methane emissions by 20 tons per day . Soil erosion, land pollution, and water pollution drastically decreased in the city. Due to these types of actions, Balangoda city became a resilient city and won 10th place in the world in the competition held by UN Habitat.

After introducing this system to our area and with its success, 3 local authorities in the country developed this system and implemented it: Nawalapitiya Municipal Council, Kegalle Municipal Council, and Kuliyapitiya Urban Council. I was able to consult and facilitate the replication of this project in Uti, India, and that project was able to generate a huge success. We invited researchers around the country to improve the process of compound tanks. This resulted in developing an innovative solution to disinfecting the dry beds when making the co-compost. Apart from using the conventional method of increasing pH to disinfect the dry beds, we introduced the solution of using thermophilic bacteria. This research was accepted by Dhaka University, Bangladesh. This project was recognized as a low-cost solution by the Local Government Ministry and the solution was replicated by other local authorities in Sri Lanka.

1. The project didn't pass the Environmental Impact Assessment since the environmental authority was doubtful about using fecal sludge in co-composting due to its unhygienic qualities. We developed the pH solution and improved it into the thermophilic solution as a response for this.
2. Resistance from the community around the project site was raised due to the smell of fecal sludge and the possibility of insect breeding around the project site, such as flies and mosquitos. We found an ecological solution for this and were able to collaborate with the community in the long run.

Yes. Local authorities have already considered this as a successful solution to fecal sludge treatment and are implementing it in their institutes successfully. This solution has been implemented internationally as well. The biggest risk involved with this solution is the consistent maintenance of the site. All the natural components in the system need continuous attention and replacements over the years. Without proper management of the project, it can have a negative impact on the community. Since the bi-product of this solution can be used to generate revenue, we have ensured that a portion of this revenue will be re-invested into the project so that it will ensure the sustainability of the project.

1. Technical knowledge and experience gained through implementing the project:
1.1 Using 3 sedimentation tanks instead of 2 tanks to ensure proper purification will enable the creation of a high-quality bi-product.
1.2 Using an irrigation valve in the receiving tank in order to maintain a proper flow of separated fecal sludge will support an effective sedimentation process.
1.3. Thermophilic bacteria can be used to sanitize dry beds.
2. Managing the process of the fecal sludge treatment facility:
2.1 Education should be provided to the laborers in the project to maintain the components in the process properly.
2.2 The durability of the components must be ensured in order to reduce the maintenance cost of the project.
3. This project can be expanded to treat a capacity of up to 50000 liters of fecal sludge. 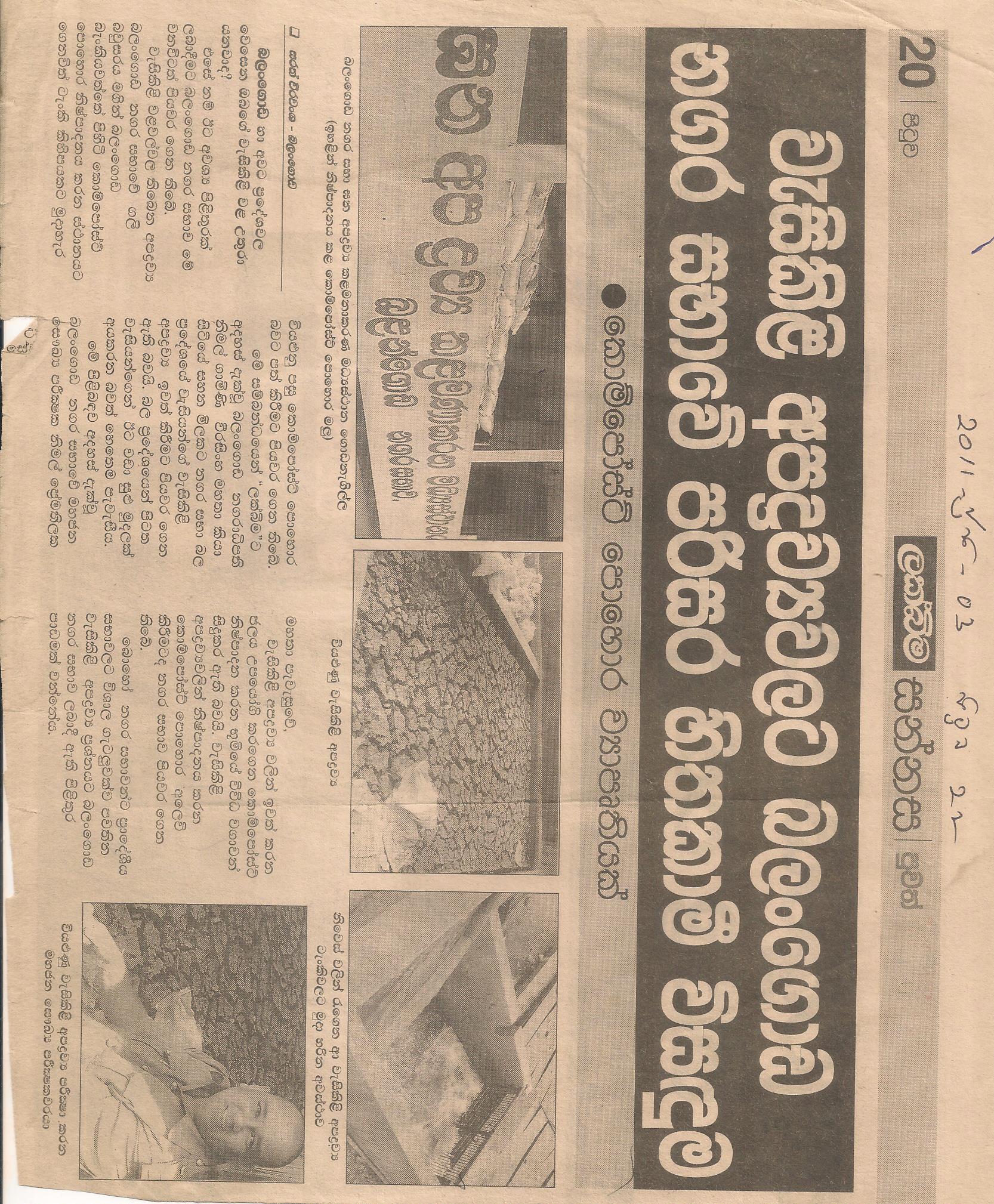 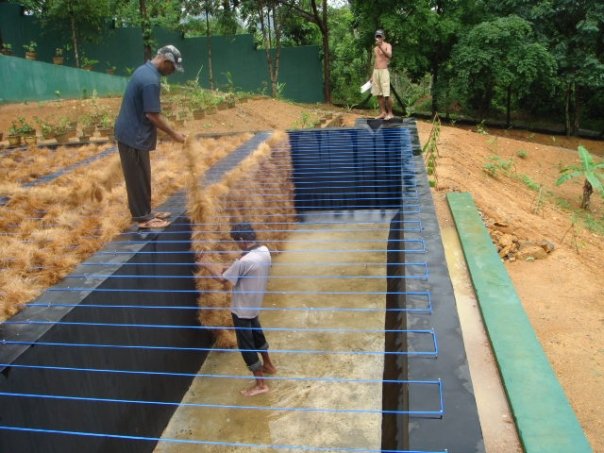 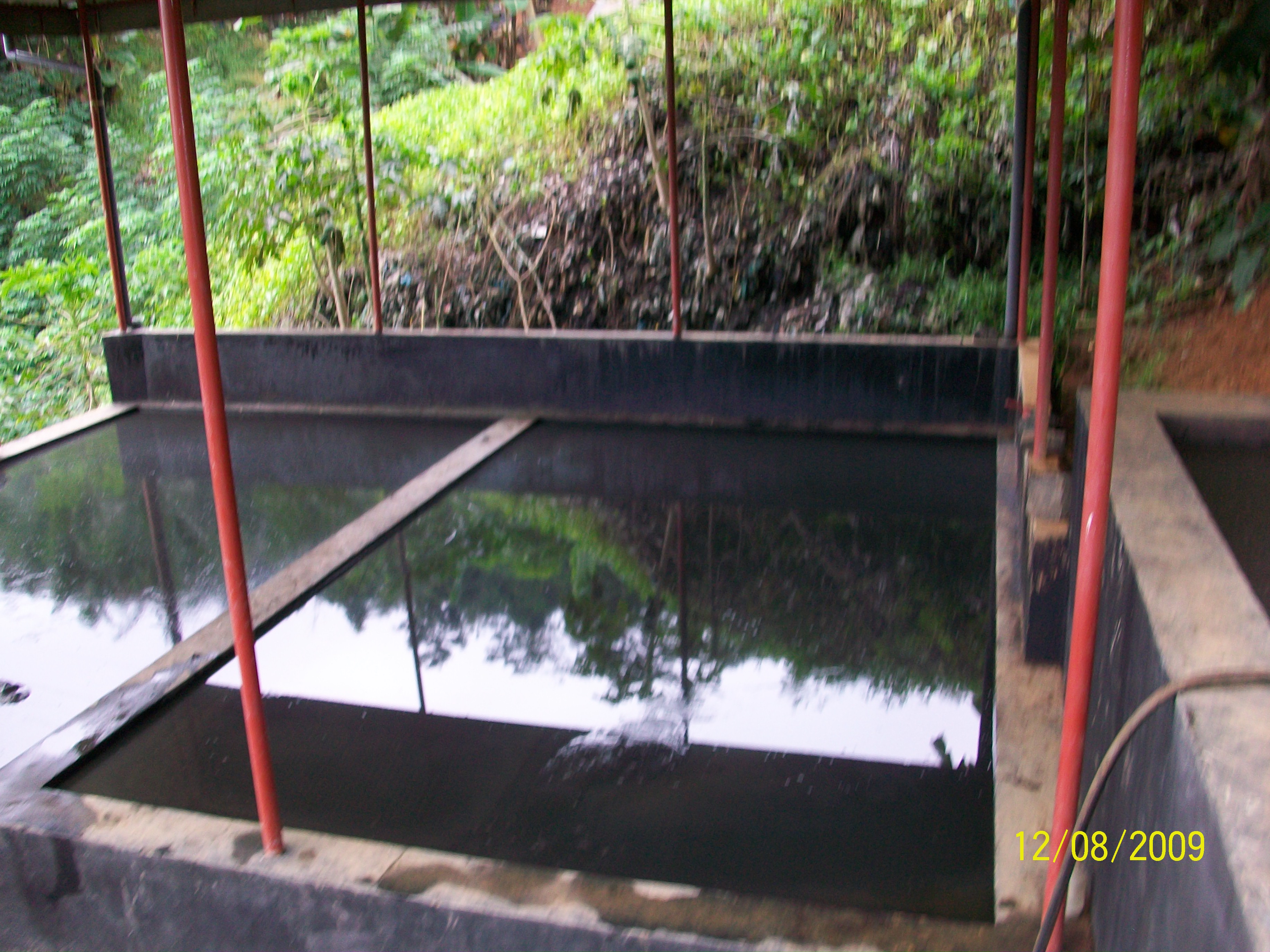 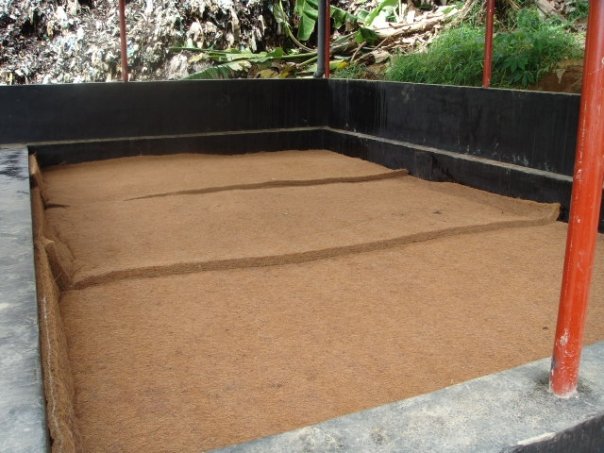 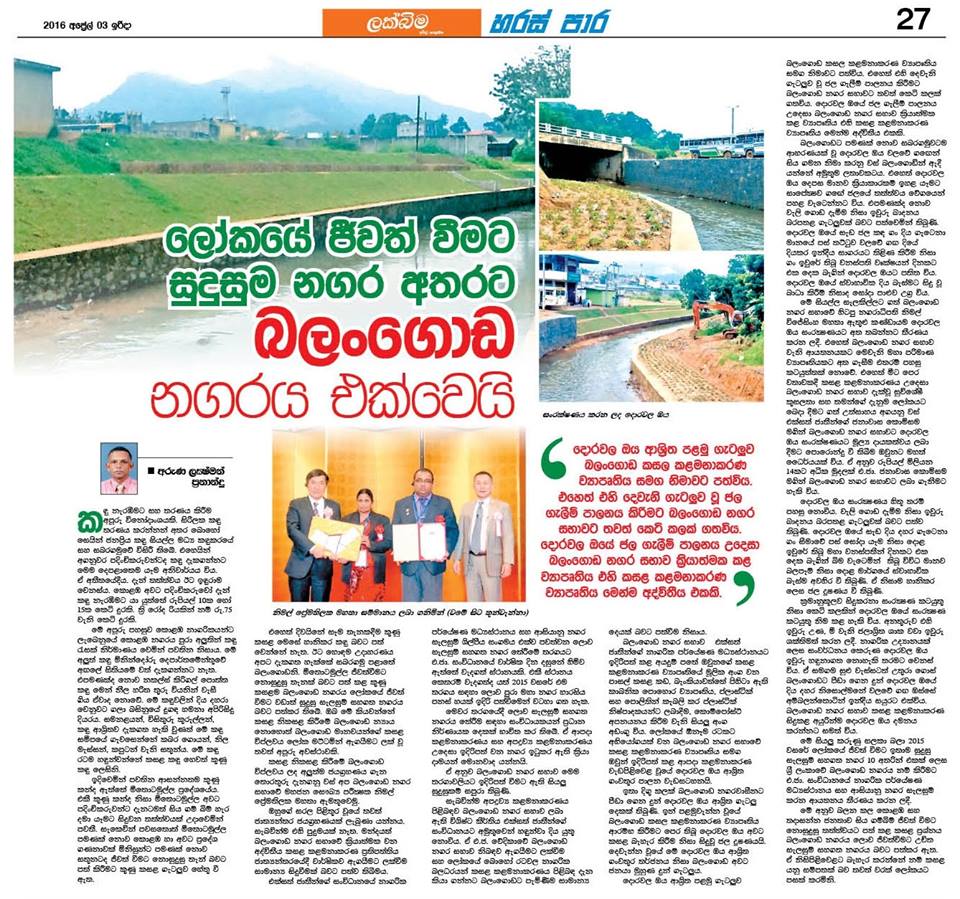 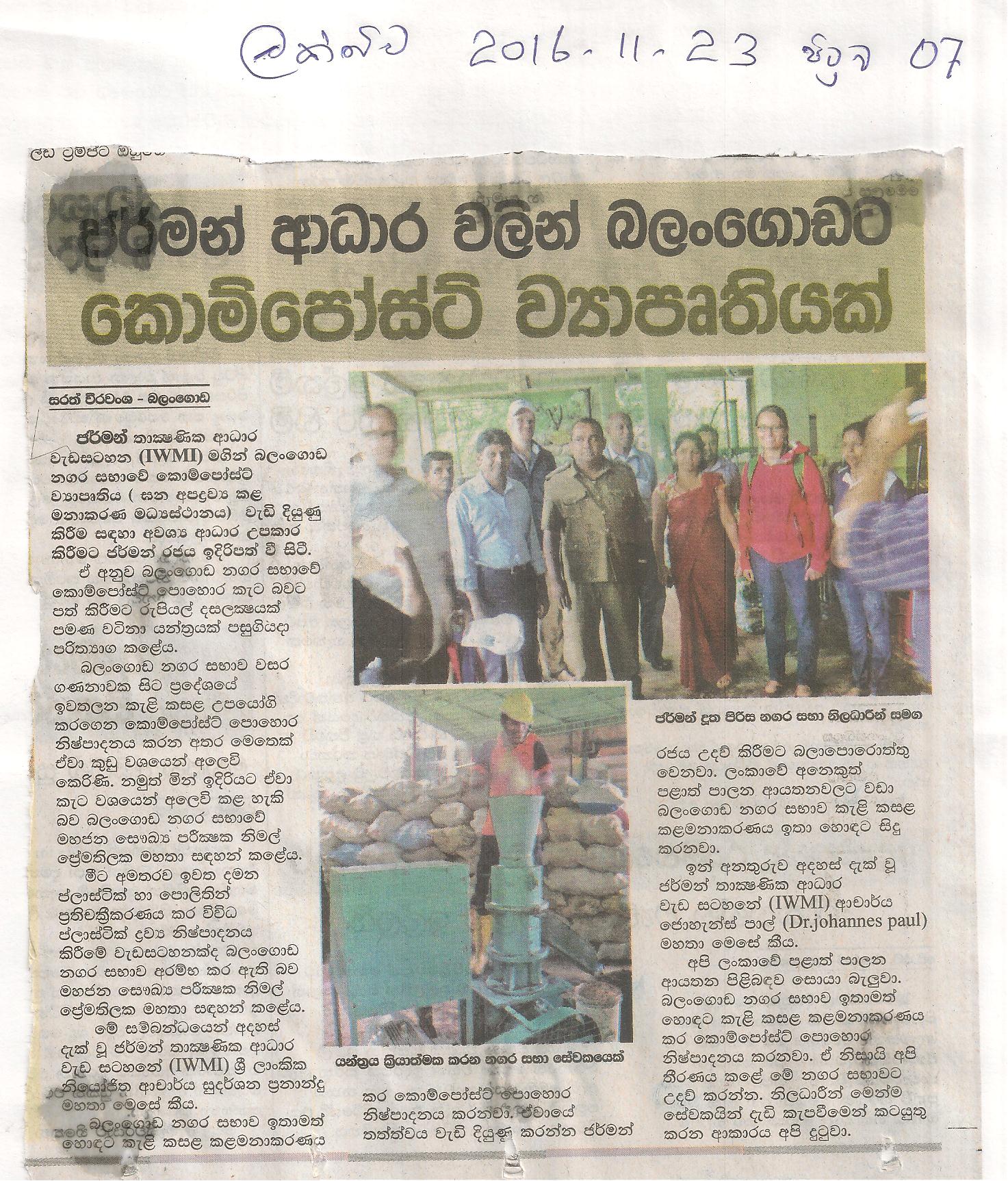