Prince of Orange to Speak to Water Experts

Media Advisory, 15 August 2011 - HRH the Prince of Orange of the Netherlands, and a Patron of the Global Water Partnership (GWP), will deliver the GWP Annual Lecture on Friday, August 19, 2011. 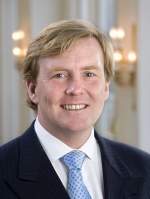 He will speak to the annual gathering of GWP Partners who are meeting to address the theme of “Water Security as a Catalyst for Achieving Food Security.” The subject is particularly relevant in light of the current food crisis caused by drought in Eastern Africa and the doubling of food prices between 2006 and 2008 with even further increases in 2010.

Over 150 participants are expected, including representatives from key allies such as the Food and Agricultural Organization, the International Committee of the Red Cross and Red Crescent Societies, and the World Meteorological Organization, among others.

Since 1997, HRH the Prince of Orange has been closely involved in the field of water management. He is chair of the Water Advisory Committee in the Netherlands. As Chair of the UN Secretary-General's Advisory Board on Water and Sanitation he makes a personal contribution to solving water-related problems around the world.

The Prince’s lecture is by invitation only and will be at 16.30 at the Clarion Hotel, Ringvägen 98, Stockholm.

More information about the Prince’s interest in water management.