The 2nd Consultation Workshop on enhancing the potential for Private Sector Participation in Water Infrastructure in Lebanon, with emphasis on the role of Banks was organised on 10 October 2017 as part of the National Policy Dialogue on Governance and Financing of water projects.

The Dialogue is carried out under the leadership of the Directorate General of Hydraulic and Electric Resources of the Lebanese Ministry of Energy and Water (DGHER-MEW) and the Central Bank of Lebanon (BdL) in cooperation with the Global Water Partnership-Mediterranean (GWP-Med) and the EU-funded SWIM-Horizon 2020 Support Mechanism project.

The 2nd Consultation focused on the enhancement of green financial mechanisms available to private banks under the Lebanese Environmental Action (LEA) of BdL for promoting environmentally sustainable projects. In particular, the meeting discussed a set of criteria developed as part of the Dialogue’s activities for the screening and selection of bankable water/wastewater projects under the spectrum of Non-Conventional Water Resources Management (NCWRM).

MEW is interested to promote under this scheme smaller-size projects, such as small wastewater treatment units for tourism compounds or buildings and the re-use of treated water for landscaping; the desalination of brackish water from wells for tourism or for agricultural purposes; water treatment for drinking purposes to benefit schools; installation of drip irrigation systems; rainwater harvesting and greywater treatment and reuse for irrigation.

As highlighted during the discussions, the selection of such projects should be based on financial considerations (cost-benefit analysis), as part of a multi-criteria analysis also including Corporate Social Responsibility (CSR) and gender equity parameters. Other important aspects, such as the project’s potential to integrate the use of renewable energies and to preserve ecosystems, should also be considered.

Lebanese commercial banks expressed their readiness to support such a relatively new field of application in Lebanon under the LEA scheme but also highlighted the need of raising the awareness of potential beneficiaries about existing opportunities. Awareness raising, capacity building and education of both water professionals and the general public were pointed out as important conditions for the success of such an endeavour. The Centre d’Information et de Formation aux Metiers de l’Eau (CIFME) established by DGHER-MEW could play an important role in this direction.

As an immediate follow-up of the consultation a few selected smaller scale pilot projects will be identified for immediate implementation through PSP and the involvement of banks, thus contributing through a ‘learning by doing’ approach towards a better understanding of the enabling conditions for PSP in the water sector, that would be applicable also for larger-size projects.

The Consultation was attended by more than 50 participants, including representatives from 9 of the most prominent Lebanese commercial banks, relevant public institutions, the private sector, Universities and NGOs. 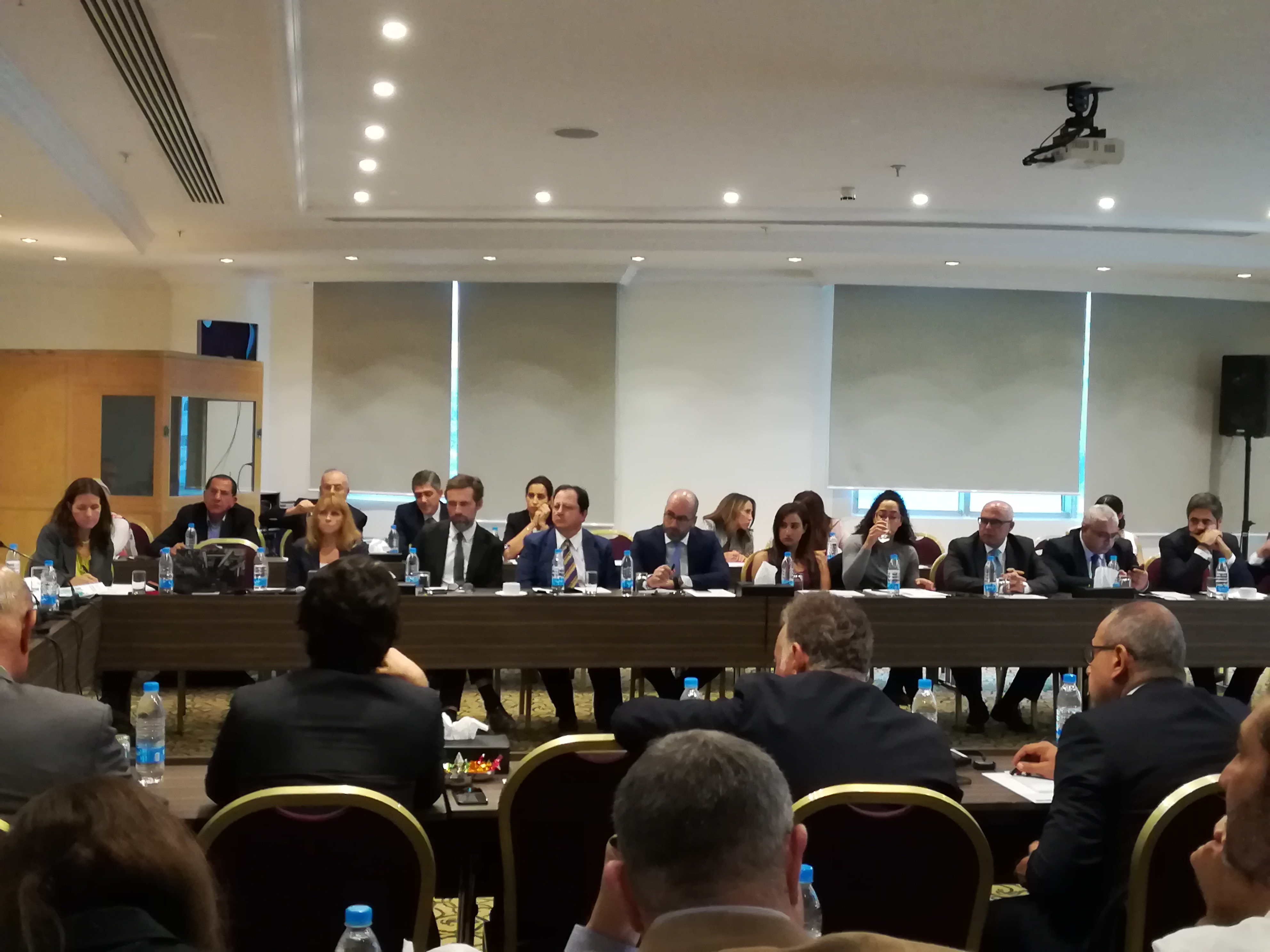 The Minister of Energy and Water, H.E Eng. Cesar Abi Khalil, opened the Workshop underlining the great interest of his Ministry in the Dialogue’s activities. Key interventions during the event were made by Dr. Fadi Comair, Director General of Hydraulic and Electric Resources and Mr. Ghassan Baydoun, the Director General of Exploitation also at MEW, Mrs. Esse Nilsson, Senior Programme Manager at the Swedish International Development Cooperation Agency (SIDA), Prof. Michael Scoullos, Team Leader of SWIM-H2020 SM and Chairman of GWP-Med, Mr. Mario El Khoury, Head of Section, Financing Unit - BdL and Pierre El Khoury, Director of the Lebanese Center for Energy Conservation (LCEC) that technically supports BdL in the selection of energy and environmental related projects under its green financial mechanisms.

The Consultation Workshop and the Lebanese Dialogue are part of the UfM labelled project Governance & Financing for the Mediterranean Water Sector, that is implemented jointly by GWP-Med and OECD and funded by Sida and the UfM flagship project SWIM-Horizon 2020 SM, financed by the European Union.

The project’s overall objectives, activities and key findings were presented during the consultation by Dr. Anthi Brouma, Deputy Regional Coordinator - GWP-Med, while Ms. Barbara Tomassini, Senior Programme Officer - GWP-Med focused on the activities carried out in Lebanon during the current phase of the Dialogue. These include, along with the above-mentioned preparation of criteria for bankable projects and the identification of pilot projects to be implemented with the support of banks, the drafting of a National Assessment serving as a reference document for the Dialogue. The Assessment informs on the current status of PSP in Lebanon, including on the role of the banking sector, and provides suggestions and recommendations on plausible ways to solve the constraints to the mobilisation of funding. In this framework, and as an innovative component with respect to similar work carried out in the other project’s countries, gender mainstreaming and the role of Corporate Social Responsibility have been given big prominence in the Assessment and the overall Lebanese Dialogue, thanks to the important contributions of Ms. Anja Nordlund, Gender Expert & Managing Director, NCG Sweden and Mr. Niclas Ihren, CSR Expert, Matters Group. The two experts have also presented their reflections on these issues during the 2nd Consultation Workshop.

The current activities in Lebanon follow up and build upon the previous work on PSP and the role of banks carried out by GWP-Med in the framework of the Mediterranean Component of the EU Water Initiative and in collaboration with OECD during 2009-2010.

- Brief report of the meeting