Investments for wastewater treatment and reuse in the Middle East & North Africa Region: In the focus at the Stockholm World Water Week

The investment potential in wastewater treatment and reuse in Middle East & North Africa (MENA) was discussed at a session organised by the Global Water Partnership – Mediterranean (GWP-Med) during the recent World Water Week in Stockholm (27 August – 1 September 2017). This was part of the “MENA Focus” set of 4 sessions, led by key institutions in the Region.2017 was the 2nd year that a dedicated MENA Regional Focus was part of the World Water Weeks’ programme, alongside the Regional Focus Days for Africa, Asia and Latin America. In addition to the (co) organization of sessions, GWP-Med is coordinating the overall “MENA Focus”.

The GWP-Med-led session “Investment potential in wastewater treatment and reuse” was held on Tuesday, 29 August. It was organised within the framework of the regional project “Governance & Financing for the Mediterranean Water Sector”, designed jointly by GWP-Med and the OECD, supported by the Swedish International Development Cooperation Agency (Sida) and formally labelled under the Union for the Mediterranean (UfM) political framework.

The session opened with a high-level introductory segment, moderated by Vangelis Constantianos, Executive Secretary of GWP-Med. He pointed on the importance of cross-cutting issues like gender, youth, and equity in planning and materializing sustainable investments, while noted the importance of defining employability targets within such water-related investments. He thanked SIWI for the opportunity provided for this debate through the Stockholm Water Week, and Sida for its long-term support and trust. 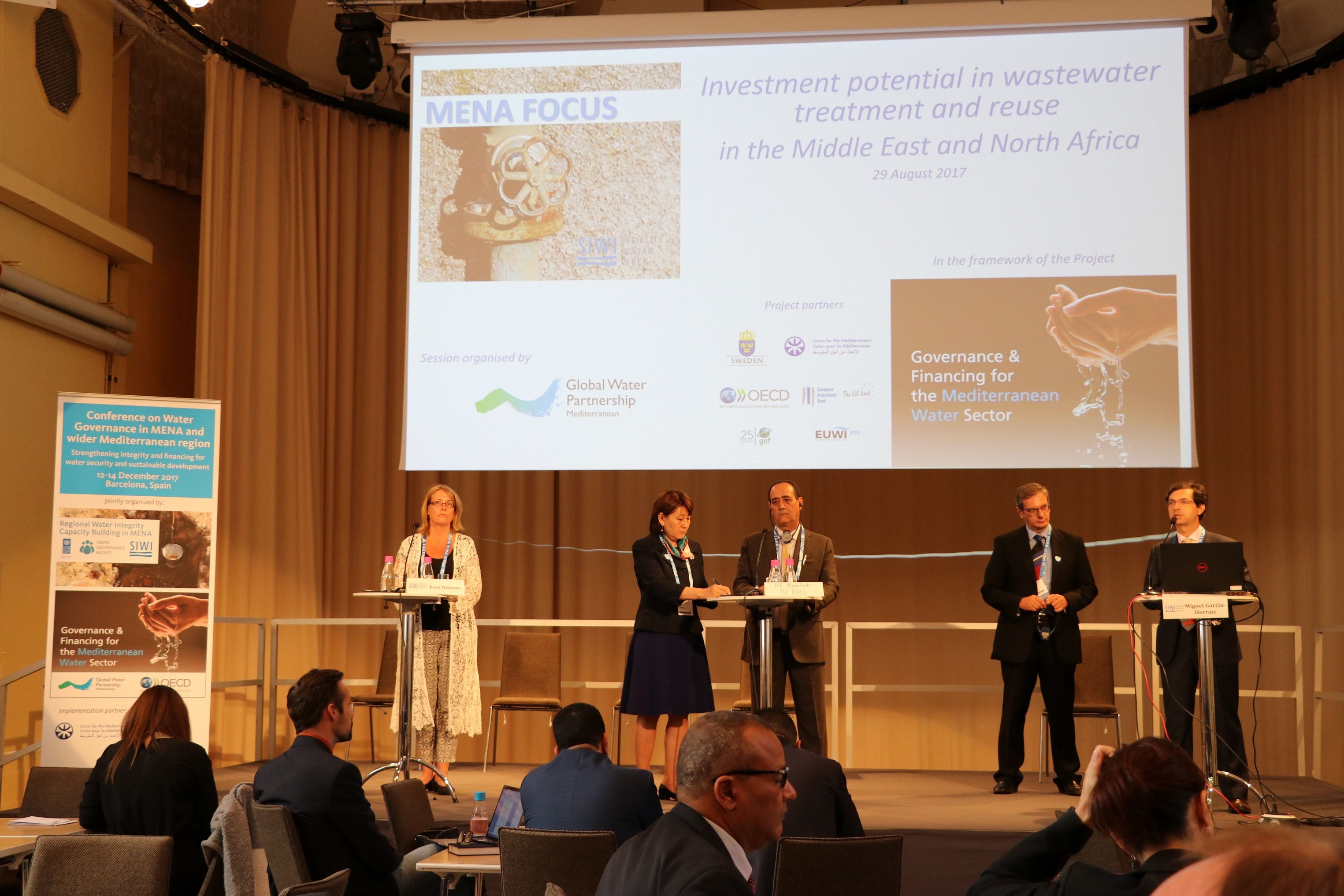 Miguel Garcia-Herraiz, Deputy Secretary General, Water and Environment Division of the UfM, stressed the necessity of investments in the water sector in the region, noting that water has an increasingly prominent role in the international agenda on climate change adding to financing options. He also highlighted the cross-cutting importance of governance which can create opportunities to private sector participation in the water sector.  Further, he noted the need to look at emerging alternative financing mechanisms, noting the role of the Union for the Mediterranean (UfM) towards policy coherence and projects on the ground, including through the new UfM Water Agenda mandated at Ministerial level in April 2017..

Esse Nilsson, Senior Programme Manager, Unit for MENA of Sida, started by sharing personal stories from growing up in a farm which taught her valuable lessons about the importance of having access to water and sanitation. She noted that water remains an intergenerational issue as investments made today secure water and sanitation for future generations. She also commented on GWP-Med’s work over the last years facilitating national dialogues to advance broader debates on national reforms with clear linkages to investments.

Oyun Sanjaasuren, Chair of GWP, reflected on opportunities for unlocking finance especially in relation to the water-related SDG 6 action items and what is needed to achieve them. She underlined the great demand for bankable projects which also requires human capacity to mobilize investment funds. She called for everyone to become advocates for governments and banks to raise the priority of water and wastewater projects as strategic investments for sustainable development, which is currently lacking.

H.E. Abdallah Rebhi, State Secretary, Ministry of Agriculture, Water Resources and Fishery, Tunisia, gave an overview of the water-related challenges that his country is facing, as well as of recent developments. He focused on the need for continuous investments in the water sector, which for a middle-income country remain expensive, stressing that the international community should embrace a concept of equity in providing financial support to distressed countries.  Among his reflections, the State Secretary noted that that infrastructure investments should go hand in hand with governance reinforcement.

The second segment of the session included two presentations on GWP-Med’s relevant ongoing work in the MENA and the broader Mediterranean Region.

Anthi Brouma, Deputy Regional Coordinator of GWP-Med, provided an overview of the activities and achievements under the Governance & Financing project during the past 3 years, both at the national level in Tunisia, Jordan, Palestine and Lebanon, and at the regional level. She highlighted common challenges identified, areas of recommendation and lessons learnt, while presenting also findings and recommendations specifically for the integration of gender dimensions and of CSR in the water sector in the Region. The presentation is available here (pdf). 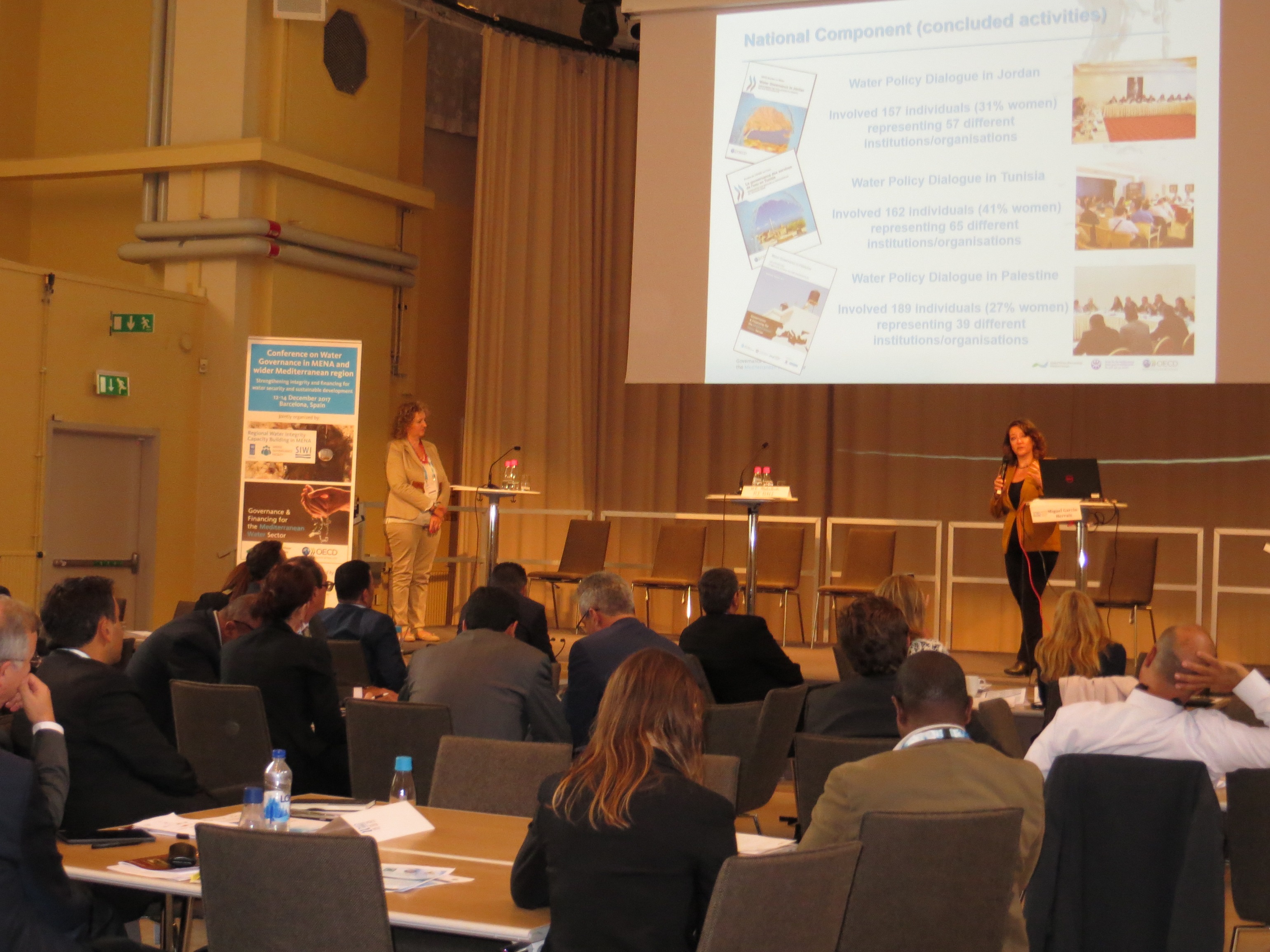 from GWP-Med’s activities in Mediterranean water-scarce islands on the management and promotion of non-conventional water resources, with the support of the Coca Cola Foundation, and the dimensions of rainwater harvesting, greywater recycling, small desalination units, the creation of green jobs, and of education and awareness raising She highlighted how this experience can be replicated in scale in the MENA region. The presentation is available here (pdf).

The session concluded with a 45-minutes Panel Discussion among a gender-balanced group of representatives of countries, financing institutions and international organisations and facilitated by Anthi Brouma, Deputy Regional Coordinator of GWP-Med and Tassos Krommydas, Senior Programme Officer at GWP-Med. 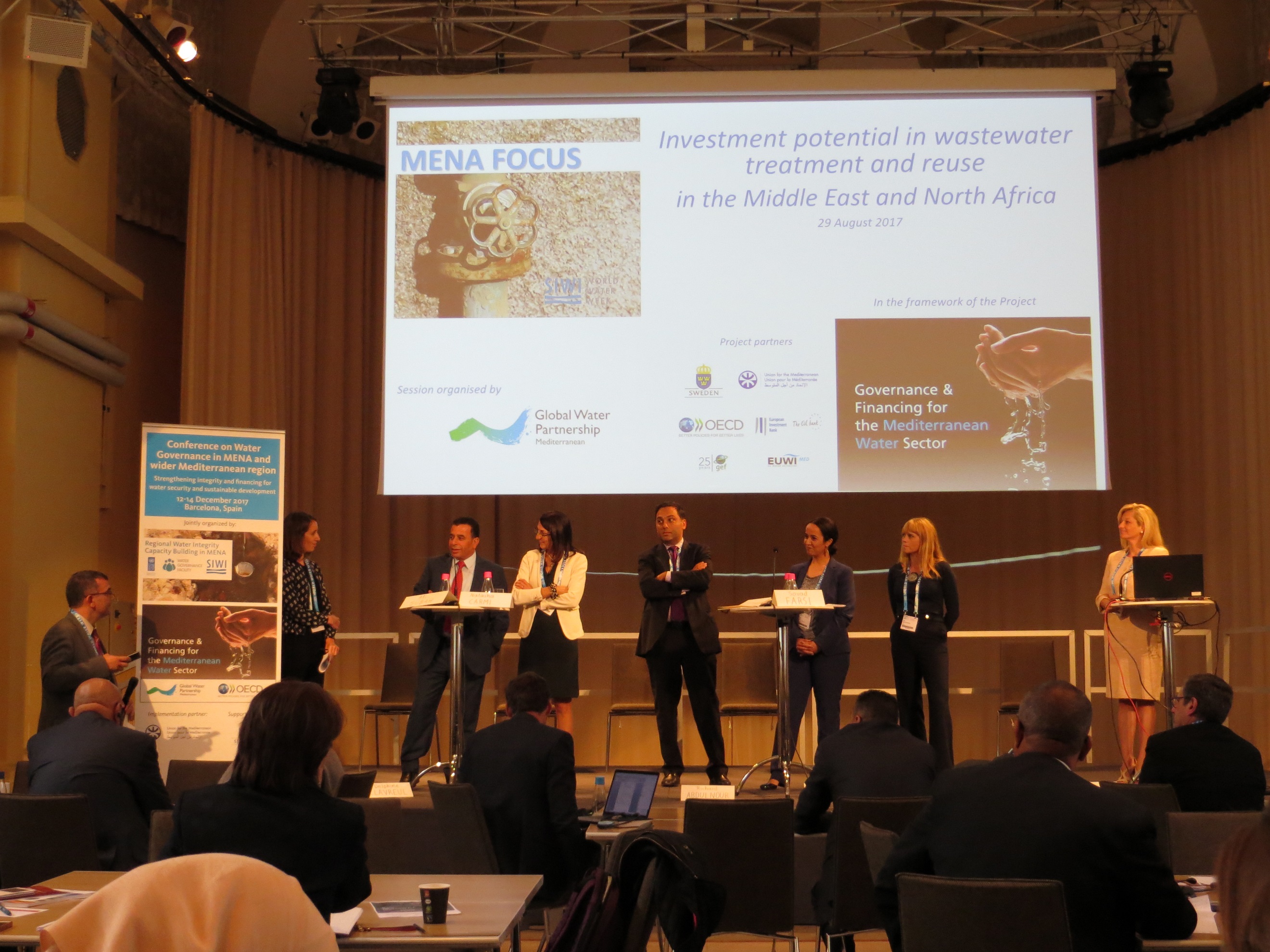 Natasha Carmi, Policy Advisor on Water in the Palestinian Negotiations Support Project, stressed that wastewater management is a complex issue in Palestine due to political constraints, including administrative limitations placed by the Government of Israel. Even though a Joint Water Committee was set up in the context of the Oslo Agreement, severe challenges remain in the approval and implementation of wastewater projects. Regarding the management of transboundary wastewater, she noted that no legal framework exists yet, albeit a draft protocol has been developed and it is hoped that discussions shall be forthcoming based on the protocol.

Ali Subah, Secretary General Assistant, Ministry of Water and Irrigation, Jordan, provided an overview of the situation in water provision and wastewater collection services in Jordan, noting that there is a need for a comprehensive investment plan of 5.4 $billion, with approximately half of this amount being apportioned to wastewater. He stressed the additional burden upon planning and services in his country as a result of the influx of refugees in the past years that has led to an increase of around 50% in the country’s population.

Dionysia Avgerinopoulou, Chair of the Circle of Mediterranean Parliamentarians for Sustainable Development (COMPSUD), highlighted the important role of the Parliamentarians to oversee and investigate what governments are doing to address water and sanitation issues. Parliamentarians also pass legislation and regulations relevant to the water sectors, ratify at the national level international agreements and engage in diplomacy on water-related issues. She noted the importance of working closely with National Parliaments as well as of engaging Parliamentarians in regional processes.

Richard Abdulnour, Advisor to the World Bank Vice President for the MENA Region, briefly outlined the Bank’s financing strategies and ongoing processes regarding investments in the water sector in the Region, including also the potential involvement of the private sector.

Souad Farsi, Programme Management Analyst in the Mediterranean Hot Spots Investment Programme (MeHSIP) in the European Investment Bank, presented MeHSIP and FEMIP (Facility for Euro-Mediterranean Investment and Partnership). She then focused on the challenges for international financial institutions in financing water sector investments, highlighting the importance of political will and the alignment of strategies of both the Ministries responsible for water and sanitation, and the Ministry of Finance.

Delphine Clavreul, Policy Analyst in the Water Governance Programme of OECD, shared experiences from OECD’s work on helping governments through policy dialogues to enhance governance which can catalyse investments. She then focused on two recent policy initiatives advanced by OECD, the High-Level Panel on Financing Infrastructure for a Water-Secure World, and OECD’s Water Governance Principles.

Unfortunately, due to delays in starting the session and very strict time keeping on behalf of the Water Week organisers, the session had to be cut-off before the last panellist, Anja Taarup Nordlund, Gender Expert from NCG Sweden, could provide her insights on gender and social-related dimensions in the region’s water sector, based on the experience under the Governance & Financing project. However, gender and equity issues as elements for making real sustainable financing, were noted by several participants in their interventions. 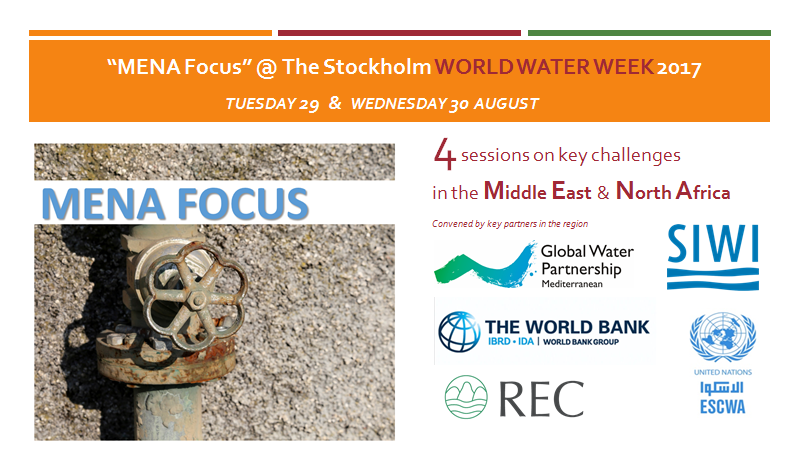 Further to the above session convened by GWP-Med, the MENA Focus during the 2017 World Water Week included the following sessions as well (more information available through the individual links).

The wealth of shared experiences and lessons learnt during all sessions of the MENA Focus offer a solid replication potential of good practices and synergetic opportunities within and beyond the MENA region. The institutionalization of the “MENA Focus” within the World Water Week’s official Programme, and further to the visibility and outreach impact, it enhances the facilitation of an exchange forum on national and regional water-related developments on an annual basis. The 2018 MENA Focus is planned to continue and reinforce the exchanges and contribute to more tangible steps towards sustainable growth in the region.

Concept Note and Agenda of the GWP-Med-led session in English and in French.

Information Note for the 2017 MENA Focus in English and in French.