The Water, Climate and Development Program(WACDEP) was developed following 2009 African Ministers’ Council on Water (AMCOW) decision to fast-track the implementation of the Sharm el-Sheikh Declaration on Water and Sanitation. 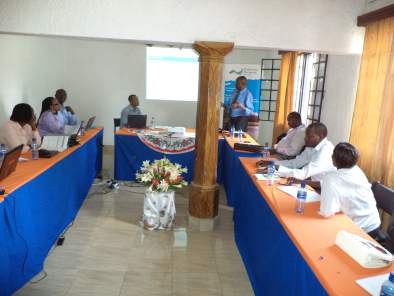 To this end, the GWPEnA cannot afford underestimating the capacity of the local government officials in the three areas to mobilize citizen participation and ownership of the activities in Bugesera Trans-boundary Project.

“the success of the Bugesera Trans-boundary Projects rests on collective efforts of citizens, local government and GWPEnA’s support,” Safari emphasized.

“To maximize the project outcomes, it is recommendable that the project focuses on priority activities in one area and thereafter scale up to other areas.” Kabihogo Léocadie advised. Concentrating the project outputs in one area for increased project impacts was strongly recommended by most participants from Rwanda and Burundi.

Adolphe Mbonimpa, Director of Agriculture and Livestock at Kirundo Province, Burundi commended the project’s approach of conducting a systematic evidence-based situation analysis prior to the project implementation.

He mainly lauded the project for considering the early warning systems as a proactive response to the hazardous climatic conditions that have periodically disorganized livelihoods in the Rwanda-Burundi communes (districts).  Mbonyimana hopes that at the end of the project, the targeted areas will be more resilient to ever-changing climatic conditions.