Tajikistan hosted the second regional consultation on Valuing Water – a global process to assist the work of the High Level Panel on Water (HLPW). Officials of water management organisations, representatives of Tajik ministries and agencies, international and regional organisations, financial institutions, academia, youth, NGOs, and other stakeholders met in Dushanbe on 6 July to add their voices to the debate.

The consultation was the second in a series of 6 planned consultations worldwide – the first one was held in South Africa in May. In these consultations, GWP is using its multi-stakeholder platform to get views from different regions on what the HLPW has written on valuing water. A concept paper, known as the Bellagio Preamble and Principles, serves as a discussion document for the consultations. The paper builds on a dialogue process that was launched at The Hague in February 2017.

In Tajikistan, delegates from GWP’s Country Water Partnerships in Central Asia and Caucasus took part. The comments reflected many of the issues that their countries face, and highlighted key messages.

Guljamal Nurmukhamedova, who is Chair of GWP Central Asia and Caucasus, said that her main message to the HLPW is to consider the traditional experience of the countries when it comes to interstate collaboration: “Because our region is quite unique in terms of successful cooperation on water issues.”

Sulton Rahimzoda, First Deputy Minister of Energy and Water Resources of Tajikistan, stressed that the Central Asian countries need to integrate actions at regional level to have common definitions on valuing water. This is something of great importance to his own country.

“Tajikistan has a huge amount of water resources, but at the same time it faces a lot of problems. Providing more that 60% of the water resources of the Central Asia region, we still have problems with safe drinking water, water supply, and water related disasters. We also have a lot of problems with electricity provision. Why? Because 98% of the electricity in the Republic of Tajikistan comes from hydropower. So, the role of water resources for the social and economic development of Tajikistan is huge, and of course the value of water – considering all these aspects – is very high too. That's why I think the holding of this regional consultation in Tajikistan is something logical. Tajikistan also has a role in the High Level Panel on Water – the President of the Republic of Tajikistan is a member of the panel – and he is one of the active members on the promotion of water on the global water agenda,” said Mr. Rahimzoda.

GWP Technical Committee Chair Jerome Delli Priscoli plays a role in facilitating the consultations, guiding the regions on format and content. Commenting on the process in Dushanbe, he said that he can already see a lot of differences between regions and countries when it comes to this topic: it’s a learning process.

In the coming month, more consultations will take place and, building on the comments received, a revised version of the concept paper will be presented at Stockholm World Water Week in August 2017. 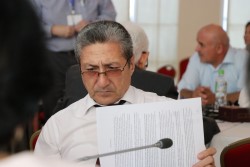