Ocean health starts on the land

On 18 November, the Starting at the Source to Save the Ocean event was co-convened by members of the Action Platform for Source-to-Sea Management (S2S), as part of the United Nations ‘Ocean Decade’ (2021–2030). Participants learned of the importance of taking action on land in order to improve ocean health. The event focused on the interlinkages of freshwater and marine water resources.

The event co-chair, Yumiko Yasuda, Senior Network and Transboundary Water Cooperation Specialist at GWP, started by indicating the need for collaboration on land, rivers, and oceans across the S2S continuum. Sarantuyaa Zandaryaa, Programme Specialist, Division of Water Sciences, UNESCO, co-chaired the event and highlighted that the freshwater community has an important role in protecting our oceans and reducing pollution, as over 80% of ocean pollution comes from land-based resources – threatening ecosystems, marine, and human life.

A welcome message was given by Martha Rojas Urrego, Secretary General of the Convention on Wetlands who said we need to think of the big picture over the next 10 years: “What happens upstream, happens in the ocean,” she said. She went on to highlight the interconnectedness of wetland, river, and ocean resource management – explaining the vital role that nature-based solutions will play in the future.

The session hosted diverse speakers from all over the world who shared their knowledge on different topics relating to S2S management.

Hans Paerl, Kenan Professor of Marine and Environmental Science at the University of North Carolina’s Institute of Marine Sciences, focused on nutrient pollution and provided a global perspective on algal bloom proliferation and eutrophication. Nutrients were recognised a long time ago as pollutants, he said, but human activity is accelerating the flow of phosphorus and nitrogen into freshwater bodies and oceans. He pointed out that the effects of climate change are further enhancing the problem – leading to toxicity such as the development of the cyanobacteria, less oxygen, and the degradation of ecosystems: “Warmer, longer seasons are extending the window of opportunity for these algal blooms to form.”

Maria Antonia Tanchuling, Professor at the Institute of Civil Engineering, University of the Philippines Diliman, mentioned that the majority of global, marine plastic pollution is found in seven Asian rivers – five of them in the Philippines. She presented the major factors that lead to plastic pollution, like poor waste management, low recycling rates, untreated wastewater, and the increasing and changing consumption styles which were even more accelerated by the pandemic. “Improved waste management, collection, engagement of the upstream countries, sustainable consumption, and data collection is needed to tackle both land and marine pollution,” she concluded.

Eunice Ubomba-Jaswa, Research Manager, Water Resources Quality, Water Research Commission in South Africa, shared her expertise about emerging contaminants and potential threats faced by the fresh and marine environments. She highlighted the situation in Africa where long coastlines are exposed to ocean pollution. She recommended the use of risk-based management of emerging contaminants. This includes identifying and prioritising, developing analytical techniques and integrated surveillance, managing upstream chemicals, and advancing water treatment technologies: “Not all wastewater treatment plants are designed to filter all pollutants.”

Ruth Mathews, Senior Manager at SIWI and Coordinator of the Action Platform for S2S management, spoke on the importance of S2S management and how all stakeholders can collaborate. She highlighted that more research is needed in ocean science and said that the Action Platform provides a useful framework to consider upstream–downstream and cross-sectoral coordination, which is needed to fulfil the Paris Agreement and the 2030 Agenda, especially SDG 14 (Life below water). “These actions are benefitting not just the ocean, but all of us,” she said.

Rüdiger Strempel, Executive Secretary of The Baltic Marine Environment Protection Commission – also known as the Helsinki Commission (HELCOM) – talked about the role of intergovernmental organisations like the HELCOM. He urged the audience to look upstream and take actions there because once pollution reaches the seas, it is too late. He also pinpointed the importance of the European Union as a signatory member to HELCOM, along with all of the Baltic Sea countries who managed to launch the Baltic Sea Action Plan with 200 concrete actions addressing ocean pressures coming from land. He concluded his presentation by emphasising the power of cooperation: “If you want to go fast, go alone. But if you want to go further, go together.”

Jerkel Tamelander, Director of Science and Policy, Secretariat of the Ramsar Convention on Wetlands, mentioned that wetlands are connectors between seas and rivers: “What happens in them, has major consequences for the health of coasts and oceans.” He pinpointed that effective and sustainable management of oceans and ecosystems needs transdisciplinary science and collaboration across scientific fields, communities, and countries. He said mechanisms are crucial in the S2S approach. Finally, he called attention to the importance and deep interlinkages of the UN Ocean Decade with the two additional UN decades: Ecosystem Restoration and Water Action.

Abou Amani, Director of Division of Water Sciences, UNESCO, concluded the event by emphasising the need for inclusive decision making with all relevant stakeholders. He said: “Science has to be open and accessible to everyone, which includes citizen science and the engagement of local and indigenous knowledge as well.”

The members of the Action Platform for Source to Sea Management include the Global Water Partnership (GWP), UNESCO-IHP, the Secretariat of the Convention on Wetlands, and the Stockholm International Water Institute.

You can view the session recording here. 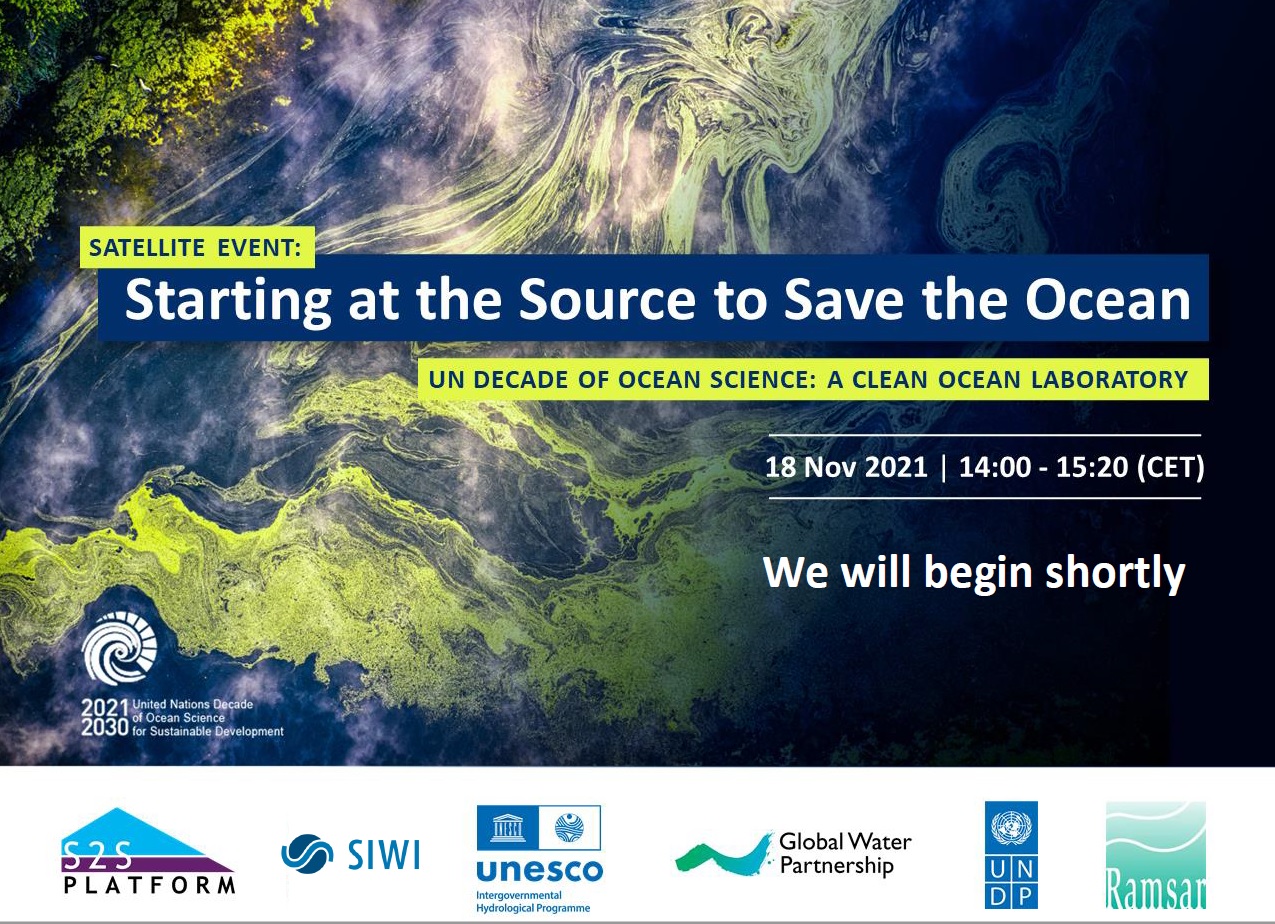