The conclusions of a second round of national stakeholder consultations on water urge the global community to include a dedicated water goal within the post-2015 sustainable development agenda.

Between February and April 2014, Global Water Partnership (GWP) brought together about 1,200 participants in 29 countries to discuss proposals for a water goal and related targets for the post-2015 development agenda.

The most important conclusion was a broad consensus that the proposed goal of "Securing sustainable water for all" is fundamental to future development. In addition, there was strong support for targets that advance integrated approaches to water management, in particular the five targets proposed in the UN-Water Technical Advice paper.

The second round of consultations indicated a clear preference for an approach vis-à-vis targets which allows flexibility for setting national targets (the "dashboard" approach), supported by clear definitions of terms and indicators. The consultations also addressed the main challenges to implementing the targets, such as institutional strengthening and coordination, new infrastructure and new technology, a substantial increase in the scale of investments to meet the proposed targets, and the need for an innovative and comprehensive monitoring system to measure progress.

2015 marks the end of the Millennium Development Goals (MDGs), which have been a driver for progress on addressing water issues, particularly water supply and sanitation. The need to do more was recognised at the United Nations Conference on Sustainable Development (Rio+20) where water featured prominently in the outcome document, The Future We Want, which states: "water is at the core of sustainable development as it is closely linked to a number of key global challenges".

The GWP-convened consultations emphasized wider global challenges as a reason why water needed to be a critical part of the post-2015 development agenda – including population growth, urbanisation, energy demand, climate change, and changes in diet, among many others. It is this comprehensive and holistic approach that requires water to have a dedicated goal but also that water resources be taken into account in nearly all the other Sustainable Development Goals.

The completed 2014 reports for each country is available in the right-hand column: "Reports by Country".

Top photo: The national consultation in Kazakhstan was held on 4 April 2014. 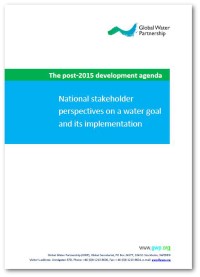 The Reports by Country (in pdf)