Bonn 19 May 2016 - Global Water Partnership (GWP) has launched a global programme to assist countries to implement the adaptation component of their Nationally Determined Contributions (NDCs) – the climate plans submitted to the UNFCCC ahead of the Paris Agreement.

Mr Cleveringa said that GWP will support countries to develop investment plans for water-related commitments in their NDCs, and he called for the urgent need to act on water, now.

‘Water is the most cited ‘sector’ in NDCs. By the end of November 2015, 129 countries (including the EU), submitted their NDCS to the UNFCCC. 92% of them included water as a priority’, he said – adding that water also topped the list of the global top 10 risks to business and economic progress, according to the 2015 World Economic Forum’s Global Risks Report.

‘Poor countries are not ready and need support to develop national adaptation plans. When we started to talk about adaptation, it was to make the voices of the most vulnerable heard’, said Minister El Haite.

Welcoming the adoption of the Paris Agreement and the SDG goal on water in 2015, the GWP Executive Secretary stressed that SDGs and NDCs provide an opportunity for countries to put water on national agendas.

The adaptation component of NDCs provides an opportunity for countries to outline current and future actions to improve water security. For many countries, water security is key for climate change adaptation and essential to economic development.

GWP recognizes the challenge that many countries face in adapting to climate risks. Many countries faced challenges in preparing their Intended Nationally Determined Contributions (INDCs). Many will face challenges in implementing their actions in NDCs. Mr Cleveringa reported five priorities for GWP’s global support programme on NDCs, Water, Climate and Development:

Mr Mohamed Benyahia, COP 22 Head of Side Events and member of the COP 22 Steering Committee from Morocco government applauded the partnership between Morocco and GWP. ‘This is just a beginning, an important step for south-south cooperation as we progress towards Marrakesh in COP 22.’

Mr Alex Simalabwi, GWP’s lead on climate change, lauded the partnership with Morocco and announced that the support on NDCs builds on GWP’s flagship programme on water, climate, and development, and associated programmes on drought and flood management, jointly implemented with the World Meteorological Organization (WMO). Since 2012, GWP, through its climate programme, has assisted over 60 countries on four continents (Africa, Asia, Europe, Latin America, and Caribbean) to integrate water security and climate resilience into national development. 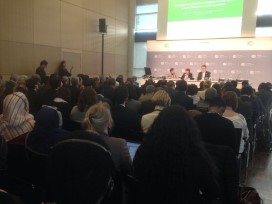 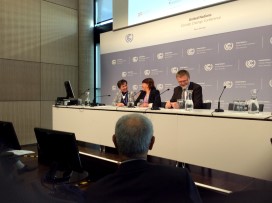 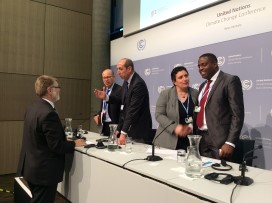 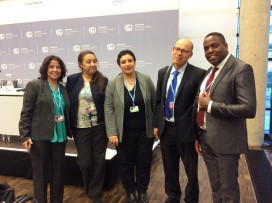