The conference was held March 11 and 12 in Granada, Nicaragua, with the participation of 100 youth from the six countries of the region, plus Mexico, Colombia, and Peru. The objective was to promote the exchange among youth about water in the context of climate change and water security. The results of the event include the creation of a regional water youth network, as well as the selection of  a GWP Youth Focal Point for Central America.

This event was a follow up to the youth conference held in October 2015 in Mexico City, in which GWP Central America identified youth focal points for each country of the region.

The agenda of the Youth for Water conference was organized around the World Water Day 2016 theme: Water and Jobs. The keynote presentation was given by Ashton Maherry from the South African Young Water Professionals.  Other presentations by experts included opportunities for youth to participate: in the global climate agenda, in the implementation of the SDG water goal, in the monitoring of water use through the use of water footprints, and in adaptation to climate change based on ecosystems. Round table discussions were facilitated on these topics too.

Young people from the different countries also shared experiences on the importance of volunteerism, entrepreneurship, youth employment, and actions for conservation and water. Four GWP Partners participated by talking about the opportunities their organisation have for youth.

The six national focal points identified at the Mexico event were joined by other young people from each country to help carry out the activities of the newly formed network at the national level. Narriman Madriz from Nicaragua was elected by participants as the network coordinator.

Participants committed to working on draft statutes for the network by May 2016, so as to have a final document by mid year. They agreed to identify and organize at least one national activity by the end of the year.

A Youth Focal Point for Central America was also identified: Vilma Chanta from El Salvador is an economist who works for the National Foundation for Development (FUNDE), a GWP Partner. She says, “It is important that young people get involved in IWRM because as youth we have the potential to generate changes.” 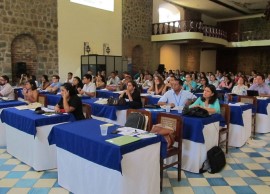