Supporting drought management in Hungary with a new Operational System

A new Operational Drought and Water Scarcity Monitoring System was created in Hungary to assist communities and farmers in making timely interventions.

In the framework of the Integrated Drought Management Programme in CEE, in Hungary were held three national consultations in December 2013, October 2014 and July 2016. The first two consultations contributed to the development of the Guidelines for preparations of Drought Management Plans by involving key stakeholders and top experts of the field, while the third one was devoted to present the Guidelines and to discuss further steps required to identify pro-active management tools to mitigate drought losses in the country.

The third consultation concluded with two main goals, which were agreed upon by the participants:  to create a nationwide operational monitoring network, and to develop a daily resolution drought index based not only on meteorological, but on soil moisture data as well.  Following the third consultation, the Hungarian Operational Drought and Water Scarcity Monitoring System was established. It is a complex system, developed under the guidance of the General Directorate of Water Management (OVF) with the contribution of the Lower Tisza District Water Directorate and University of Szeged. 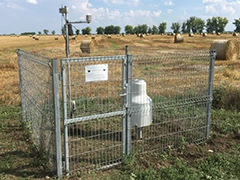 The system, which is still under development, is appropriate to assist farmers in making timely interventions since the measured parameters, the time series of calculated data and a 10 day drought forecast are made available online free of charge. Furthermore it is planned to integrate the system into the existing Hungarian water damage control system (flood, excess water). Proper thresholds and respective drought stages will serve as basis of future operative actions under drought situations. It will support also the irrigation development and further research programmes. According to the plans the current number of monitoring stations (47) will increase to 150 in the near future.

Scientific article about the development of the Operational Drought and Water Scarcity Monitoring System in Hungary.