Managing the Risk of Extreme Weather Events in Central Europe

The TEACHER-CE (which stands for joinT Efforts to increase water management Adaptation to climate CHangesin central EuRope), was a successful project led by the  University of Ljubljana and funded by Interreg Central Europe. TEACHER-CE addressed the consequences of climate change such as drought, heat waves, floodsand others, which are already visible in Central Europe. They all call for better risk and adaptation management coordination for preventing the detrimental water-related ecological consequences of a changing climate. TEACHER-CE addressed this need by integrating and harmonizing results of previously funded INTERREG, Horizon 2020, and Life projects RAINMAN, FRAMWAT, PROLINE-CE, SUSTREE into the so-called CC-ARP-CE Toolbox.

The focus of the two-year-long (2020 – 2022) TEACHER-CE project was to improve the integrated water management capacities of the public sector and related entities for risk prevention, water protection circular city adaptation in Central Europe through action on local level and trans national cooperation. The TEACHER-CE toolbox was created, focusing on an integrated approach to climate-proofing of the management of water-related issues to prevent detrimental climate change-induced water-related outcomes such as floods, droughts, and heavy rain. The project promotes the protection of water resources and their sustainable use by improving the capacities of local and regional stakeholders in the water management sector to adapt to climate change, aiming to make the regions in Central Europe more ecologically resilient.

Project had three primary objectives. First, to develop and validate a framework of tools for climate change adaptation and amelioration of related risks. Second, capacity development forstakeholders to adapt to a changing climate using this emerging toolbox and third, to boost integrated participatory water management by interacting with target groups. These are municipalities and other regional and national authorities that have the mandate to change and adapt to emerging water-related consequences of climate change. The direct local and regional implementation of the tool box will help regions in adapting their processes to the changing climate conditions.

During the project's first phase, a concept for tool integration into theTEACHER-CE tool box was developed, based on three pillars:

A unified overview of project tools and their interlinkages was created by evaluating 23 projects in total, with a special focus on the four projects RAINMAN, PROLINE-CE, FRAMWAT, and SUSTREE. Synergies between these approaches were found and so the stage for the TEACHER-CE toolbox was set. To add value to the understanding of stakeholder needs, a compilation of knowledge from existing studies and projects addressing the effects of climate change on water management was created. The core outcomeof the three pillars is a paradigm for integrating exploited tools that triggers cooperation between diverse tools and satisfies the needs of users in the context of climate change.

TEACHER-CE toolbox CC-ARP-CE is an important feature, acting as a central platform for the verification of the project's various objectives and deliverables in an actual, operational multi-institutional setting. The toolbox is an online platform including a web map service that provides spatial orientation on all identified water management issues, information on climate change scenarios with key indicators, navigation through EU and national data portals, links to tools developed in previous EU projects, and an integrated comprehensive catalogue of measures. The tool design is appropriate for basic use, but also includes advanced features for expert use. The Toolbox allows us to communicate ideas, issues and problems within a given river basin and share diverse perspectives on potential solutions with other users. It can be found at http://teacher.apps.vokas.si/home. 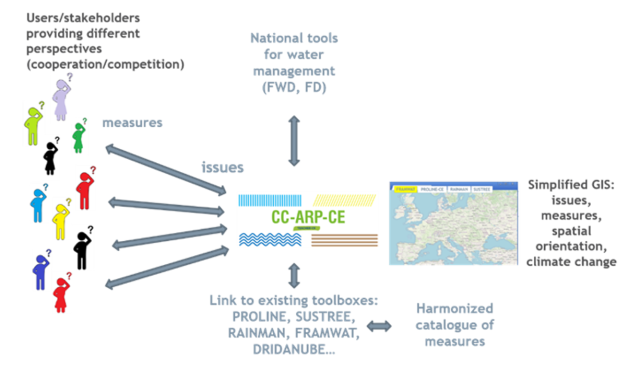 The integrated CC-ARP-CE Toolbox was evaluated through national stakeholder training workshops, as well as applicability testing. The CC-ARP-CE toolset was evaluated and validated in nine pilot actions across eight countries including Slovenia, Germany, Poland, Italy, Austria, Hungary, and the Czech Republic. Stakeholder workshops were carried out in each country, where user suggestions and proposals for enhancements were collected. For the applicability testing of the toolbox, a special Focus Group was established consisting of Associated Partners and further key end-users of all partner countries. Overall, the feedback about the Toolbox was positive. The definitive version of the Toolbox together with strategies for successful adaptation were presented at the final conference of the project in February 2022.

An integrated and collaborative joint strategy for improving existing water management practices is being developed by the partners, promoting the use of the CC-ARP-CE Toolbox. The gaps in existing strategies, policy documents and directives implementation at the operational level were identified. A group of representatives from all project partners examined over 100 policy documents containing water management and climate change adaptation strategies. The proposed vision for strategy improvement includes four general recommendations related to the integration of assumptions of national/regional documents into the planning process; integration of climate change effects into the planning process; maximization of cross-sectoral benefits and prioritization of the implementation of nature-based solutions. In addition, for operational level water management planning, detailed recommendations in the form of a step-by-step guideline were prepared, with a focus on the CC-ARP-CE tool and cross-fertilized projects, as well as the assumptions of the European Climate Adaptation Platform "Climate-ADAPT."

TEACHER-CE was an ambitious combination of multiple preceding projects. The results, applied in the real world, have a huge potential to better manage climate change and prepare faster for any associated assessed risks. Due to the successful finalization of the project and its preserving value, the project partners have decided to continue cooperating further.