GWP CEE and GWP CACENA held a side event at UNECE’s 8th Environment for Europe Ministerial Conference on 9 June 2016 in Batumi, Georgia.

Joint side event of GWP CEE and GWP CACENA

The session was organised in the form of a panel discussion and tackled issues related to the aspects of knowledge generation and dissemination on water security.  Mr. Francois Brikke from GWPO in Stockholm introduced GWP's SDG Preparedness Facility which aims at supporting selected countries in their commitment to the post-2015 Development Agenda.

Georgia and the Global Challenges – Reality and Commitments were presented by Mr. George Dzamukashivili of GWP Georgia. In the following lively discussion, the countries from the Caucasus and Central Asia region had the possibility to share their experiences on the topic.

One of the highlights of the session was the presentation of the recently established Youth Parliament for Water in CACENA, delivered by Ms. Elena Tsay.

Experiences with national dialogues on the SDGs

GWP CEE shared with the audience experiences from the region with national dialogues on the SDGs that were held in Bulgaria, Poland, Romania and Slovenia in 2014. They were one of steps in adopting global Sustainable Development Goals.

Identifying the stakeholders was one of the key challenges when preparing the dialogues. GWP CEE was aiming at including stakeholders from key institutions with knowledge and influence on the five areas covered by the proposed targets: IWRM, governance, wastewater and water quality and water disasters.

It was also important to include stakeholders involved in environment issues and those from large water using sectors such as agriculture, industry and energy. Future sustainability will depend on the way in which these sectors manage their water use. 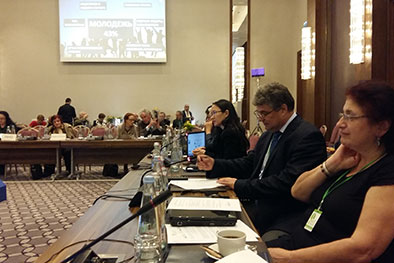 The Sustainable Development Goals can be an opportunity for new implementation pathways, including greater stakeholder participation, particularly of the poor, indigenous peoples, youth, and women. It was emphasized that the institutions will need to be strengthened to deliver results across the broad spectrum of water, sanitation, and related areas.

Institutional coordination remains a challenge, especially in circumstances where there is an underlying capacity deficit.

The participants discussed how GWP can contribute to strengthening the cooperation among countries in Central Asia and Caucasus and Central and Eastern Europe by providing opportunities for joint learning and capacity building for key stakeholders towards achieving the SDGs.

The side event intensified the cooperation between GWP Central and Eastern Europe and GWP Central Asia and Caucasus and the key regional stakeholders.