Towards future drought activities in Central and Eastern Europe

The fourth and final workshop within the Integrated Drought Management Programme (IDMP) was held on 21-22 April 2015 in Bucharest, Romania.

The IDMP in CEE started in February 2013 and will officially end in June 2015. In April all the partners finalised the main achievements and outputs, which were presented at the fourth workshop. The partners agreed that the activities and outputs so far are a good basis for continuation of the programme.

During the two years the experts have prepared several guidance documents and publications, such as the Guidelines for preparation of the Drought Management Plans as part of River Basin Management Plans, Guidelines on Small Water Retention Measures and IDMP CEE Good Practice Compendium, which will summarise not only the main achievements of the programme, but also good practices from other drought projects, as well as examples of Drought Management Plans which are already functioning (for example in Romania, Greece, Great Britain, etc.)

Within the programme some new concrete approaches, especially focusing on agricultural sector as one of the most vulnerable ones in the region, were tested and described:

With different dissemination activities (videos, photo competition, articles, publications, etc.) the Programme aimed to increase the awareness of drought issues in Central and Eastern Europe, communicating the knowledge gathered and supporting the programme in reaching politicians, governmental authorities and also the general public. 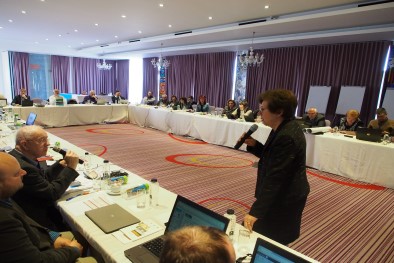 Working with the main end users

An essential part of the Programme was involving the main end users at policy level through conducting the total of twenty National Consultation Dialogues in ten countries. The main purpose of the dialogues was to discuss the current status of the drought management in the country, strong and weak areas and how can IDMP CEE results be used at national level to help improve all aspects of drought management (monitoring, risk assessment, etc.). Other stakeholders such as farmers, were also involved in the Programme though several workshops, where experts were showing them the practical application some of the results.

Continuation of IDMP CEE - building on the achieved results

The second day of the workshop aimed to explore possibilities for follow up activities in the short and long term, based on the developed proposals and submitted by experts working on the project. The partners tried to identify which areas in the drought management are still weak. The participants developed four main topics in groups: