In 2017, water distress increased in Mali, a situation which alerted the Water Management Commission of the Sélingué reservoir and Markala dam (CGESM) to convene a third meeting since the beginning of 2018. This was on Wednesday 21 February 2018 in Ségou, at the direction of the Office du Niger.

The meeting noted not only the great weakness of the water level in the river since 1991, but also the state of water pollution due to anthropogenic actions.

The drop in water level in the Niger is estimated to be about one meter lower compared to the last three years," said Mr. Yaya BOUBACAR, chair of the CGESM.

“Compared to other years when the recession began in January, this time it started in 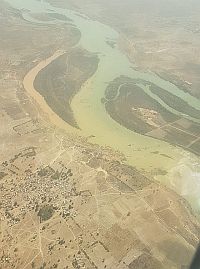 September 2017. That is why we have invited the development offices to suspend the cultivation of rice off-season," he said. He invited all users to make a rational use of water and electricity while waiting for the next rainy season.

It was also decided to set up local brigades to raise awareness and monitor the waterways, particularly the Niger River. The session advised the rural development offices and the company supplying water and energy - Energie Du Mali (EDM-SA) to respect the conventions with the hydraulic services on their water intake. On the use of dredgers, he invited everyone to raise awareness for the preservation of the Niger River.

The governorate representative, Bayili Ould Cissé, indicated that the year 2017 was marked by a rainfall deficit that resulted in a critical, even exceptional hydrological situation. This situation has led to an early and severe low-water level in rivers aggravated by the effects of climate change, anthropogenic activities, especially dredging in riverbeds and occupation of buffer zones.

Declining water levels in the river negatively impacts agro-sylvo-pastoral activities and ecosystems. For this reason, it is essential for all users to change their behavior and join forces with other stakeholders in order to combine efforts for a rational and coordinated management of the available water resources of the Niger River.

Water Management Commission of the Sélingué reservoir and Markala dam (CGESM) is responsible, among other things, for informing decision makers on the impact of water management in the reservoir, in all technical aspects, of dam-related activities.

The CWP was represented at this meeting by the Communications Officer, Mariam Diakité.