Facilitating the Creation of a National IWRM Plan in Botswana

In Botswana, at the request of the Department of Water Affairs, GWP led the technical preparation of the country’s Plan for Integrated Water Resources Management (IWRM). This included the facilitation of stakeholder consultations and the coordination of demonstration projects on efficient water management solutions. The formal approval of the national IWRM plan in 2012 resulted in an integrated approach being firmly embedded into the National Development Plan 10 (NDP 10), through which IWRM activities have been allocated funds of more than USD 31 million.

Botswana is dry, prone to recurring droughts. Due to limited surface water resources, the country depends largely on groundwater reserves, particularly for agricultural, domestic, and mining needs. Existing water resources are coming under increasing pressure due to rising consumption, pollution, and climate change, which is expected to result in reduced rainfall over most of the southern African region. With few opportunities to increase water supplies, future solutions are largely limited to water demand management and resource conservation.

The country’s first Water Act was adopted in 1968, but by the 1990s the shortcomings of the legislation were apparent, partly due to a lack of coordinated institutional planning to address the fragmented and sector-based approach to water development and management. The water sector reform included the 1991 National Water Master Plan (NWMP) which redefined the governance framework for the development of water resources. A review of the NWMP in 2006 made recommendations for further reform, including the need to shift from meeting water demand through the development of surface and groundwater resources, to adopting an IWRM approach with an emphasis on demand management solutions identified through multi-stakeholder engagement. Covering a 30-year period (2005-2030), the recommendations in the review provide a policy framework for water sector planning and investment.

A national IWRM and Water Efficiency (WE) plan was developed between 2010 and 2012 to guide the implementation of an integrated approach. Driven by the Department of Water Affairs (DWA), the IWRM/WE plan identifies strategic areas for action in the short, medium, and long-term. The NWMP and the IWRM/WE plan together constitute Botswana’s water resources strategy.

Implementation is mainstreamed into existing national and district planning frameworks. At district level, local development plans and programmes incorporate activities according to need.

The IWRM planning process was funded by UNDP GEF.

The development of the Botswana IWRM/WE plan was led by the DWA under the Ministry of Mineral, Energy, and Water Resources (MMEWR).

GWP initially produced a national IWRM status report as part of a scoping study aimed at identifying water related opportunities, challenges, and issues, as well as the key stakeholders. The results from the study formed the framework for plan preparation.

The work included stakeholder consultations jointly facilitated by GWP, the DWA, and the Centre for Applied Research. GWP was also instrumental in coordinating demonstration projects on efficient water management. These were implemented with the aim of informing the IWRM/WE plan and encouraging uptake of local interventions to demonstrate the benefits of an integrated approach. The projects targeted the use of recycled water in the private sector, stormwater harvesting in the mining sector, and rainwater collection in schools.

After the approval of the IWRM/WE plan, GWP has continued to lobby for implementation through various means, including the organisation of an annual Water Pitso – a consultative forum convened by the DWA and GWP, which brings together stakeholders representing government, the private sector, civil society organisations and community leaders, and directs the operations of the MMEWR.

The IWRM/WE plan was formally adopted and endorsed in early 2013 by the Ministry of Minerals, Energy and Water Resources and is now being implemented.

Together with the NWMP review, the IWRM planning process influenced the 2013 mid-term review of the NDP 10 which makes reference to the IWRM/WE plan and the key role it plays in addressing national and transboundary water management priorities. The NDP 10 is the main national level planning process through which strategies and initiatives for water resources management are financed. As a result, activities from the IWRM/WE plan have been allocated funds of more than USD 31 million.

The IWRM planning process also accelerated the establishment of an independent Water Resources Council to oversee and allocate the nation’s scarce water resources.

Since the plan’s finalisation, the DWA, in collaboration with GWP, has been lobbying for the approval of the first Botswana National Water Policy which is based on IWRM principles and identified by the plan as a priority area. The draft policy was approved by the Botswana Cabinet in 2013 and presented to Parliament in June 2015. Approval of the draft policy will result in the establishment of an energy and water regulator.

The IWRM/WE plan has also impacted the agricultural sector. Spin-off investments include USD 25 million from the World Bank to fund the Ministry of Agriculture to pilot the reuse of treated wastewater for irrigation purposes in Palapye. As a key stakeholder in the development of the IWRM/WE plan, the Ministry of Agriculture deliberately sought funding for a priority activity related to its mandate from the plan – a good example of the benefits of achieving ownership of an integrated approach beyond the water sector.

What do the Stakeholders say?

In March 2018, we did a follow-up to this Impact Story, by visiting Gaborone, Botswana, and talking to key people who were involved in the process. This video presents some reflections: 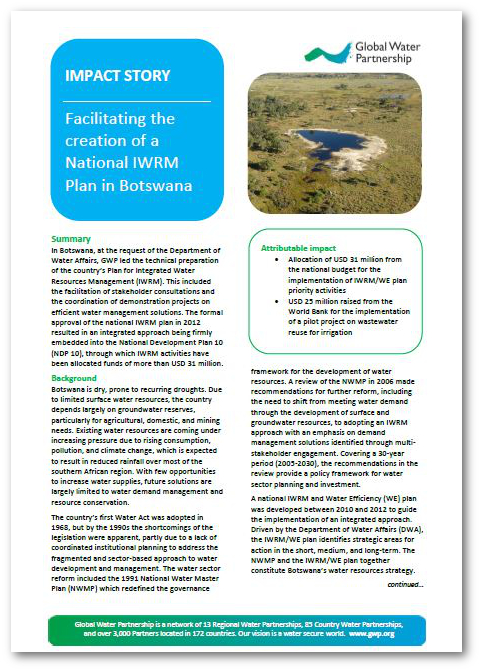 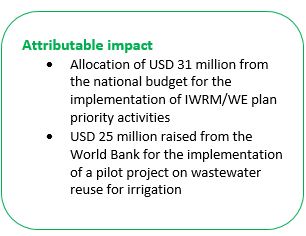