Partnership for Water and Sanitation in Karachi

In the early 2000s it was clear to the citizens and municipality of the megacity of Karachi, Pakistan, that nothing short of stakeholder empowerment would be sufficient to overcome the urban water management problems facing the city.

The result was the GWP-supported Karachi Water Partnership which has successfully served as a platform for collective action by citizens, government, and the private sector to better manage water resources.

Recognising that dysfunctional water services, water borne diseases, and water scarcity were unlikely to be solved without the contribution of all concerned, a group of citizens came together from various areas of water management to discuss the concept of a neutral, multi-stakeholder group unified by a common aim to foster government-citizen collaboration for improved water resources management.

The Karachi Water Partnership (KWP) was launched in April 2007 by the Hisaar Foundation, a local organisation working for water, food, and livelihood security. It was established on the basis that water and sanitation issues could not be solved without government, private sector, and civil society acknowledging their responsibilities and accountability for the sustainable management of the city’s water.

Once the foundations - building of partnerships, political support, and awareness raising - had been laid the KWP chose to focus on one of the 18 Town Councils in the city. An Area Water Partnership (AWP) was established in Gulshan-e-Iqbal, a Town Council of around one million inhabitants in northeast Karachi, where a neutral platform was established for government and citizen groups to jointly develop action plans to improve water supply and sanitation.

GWP provided the model for the KWP stakeholder dialogues and workshops that focused on building partnerships and raising awareness of water supply and wastewater problems. In 2008, three conferences and six workshops and dialogues were held, and 35 stakeholder meetings.

GWP was active in the launch of the AWP in Gulshan-e-Iqbal, and instrumental in building citizen ownership of the process, establishing the forum for dialogue and decision-making, and promoting behaviour change in relation to water resources management and conservation.

GWP also provided seed funding to organise the dialogues. Financing for the implementation actions was raised from government, corporate support, and local philanthropists.

The establishment of a multi-stakeholder partnership is the key to fostering change in the management of water and sanitation in Karachi. The partnership was mandated to act through seven Memoranda of Understanding with city-based institutions, including the City District Government of Karachi and the Karachi Water and Sewerage Board (KWSB).

Since its launch, more than 300 partners have joined the KWP with each signing a pledge to conserve and better manage water and sewerage at home, in places of work and study, and in public spaces.

In Gulshan-e-Iqbal, the town administration set up a water cell to increase understanding of water issues and the government’s role in conservation. This led to the printing of guidelines which the KWSB agreed to distribute with monthly water bills to over one million homes, schools, businesses, industries, and mosques.

The town appointed 19 trained water inspectors with the aim of promoting water conservation in local communities and providing a visible link between the government and the people on water issues.

The WWN also led a water and sanitation programme for local schools through which school authorities and the KWSB collaborated to enable the construction of water supply and sanitation infrastructure for over 400 teachers and 8,500 school children in 55 public and private schools.

The collaboration between Hisaar Foundation and the Gulshan-e-Iqbal administration has led to the development of two concepts: Cost Synergy and Mutual Accountability. Accountability is looked at comprehensively, not only of public institutions that deliver services, but also of the citizens that use the services. The principle of cost synergy is based on each institutional partner spending its own money to carry out commitments.

Much of KWP’s success has been achieved through the commitment of institutions and individuals who willing invest time and resources towards a common good. The monetary value of such contributions is difficult to quantify, although early in the process the KWP successfully raised USD 70,000 directly from public and private sources to fund interventions in Gulshan-e-Iqbal.

There have been set-backs. In 2011 the elected local government system was abrogated, hampering momentum. Since the premise of the AWP platform was based on government-citizen collaboration, the rollback of the government system in the city affected the spirit of partnership as well as the availability of resources.

Whereas this development increases the challenges, it also serves to demonstrate the importance of having multi-stakeholder partnerships in place to mobilise resources and seek alternative means of ensuring improved water services in the absence of strong local government support. 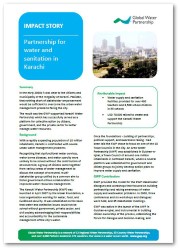 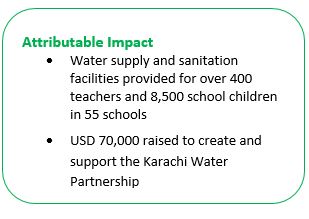