GWP Zambia was requested by the government to facilitate the development a national Integrated Water Resources Management/Water Efficiency (IWRM/WE) plan. GWP Zambia managed the multi-stakeholder consultations, led an awareness raising campaign, and initiated a capacity building programme – all of which resulted in buy-in from a range of actors.

The government used the IWRM/WE plan to guide the implementation of the Fifth National Development Plan which resulted in ten IWRM/WE programmes being adopted. This unlocked investment to improve water security totalling US$51 million from the World Bank and African Development Bank. With an initial timeframe to 2030, the IWRM/WE plan is likely to remain the framework to which national investments and overseas funding related to water resources management will be anchored.

Zambia has faced challenges in managing its water resources, resulting in supply shortages, pollution, inadequate information for decision making, inefficient use, lack of financing and limited stakeholder awareness and participation. As part of water sector reform in the 1990s, the of Zambian government adopted the National Water Policy (1994) which identified an Integrated Water Resources Management (IWRM) approach as a prerequisite for addressing these issues.

In the context of the National Water Policy and the 2002 international target to prepare national IWRM plans, the Zambian Ministry of Energy and Water Development (MEWD) began developing an IWRM/WE Plan to provide a “unified implementation plan that supports both the reforms of water resources management as well as all other inter-related/multi sectoral aspects of IWRM and water efficiency, in a coordinated, effective and efficient manner”. The IWRM/WE Implementation Plan was completed in 2008 and serves as a single reference document for all stakeholders on priority water-related interventions to support socio-economic growth.

In 2003 GWP initiated the Partnership for Africa’s Water Development (PAWD) programme to support the development of IWRM plans. The GWP PAWD programme shared many objectives with the existing Zambian Water Resources Action Programme (WRAP) and the Government of Zambia decided to harmonise the two initiatives. GWP Zambia was requested to facilitate the process within the PAWD framework and in December 2003 the PAWD project was launched under the leadership of MEWD.

GWP Zambia organised a multi-stakeholder consultation process to identify priority issues and the constraints of managing, using, and developing water resources at sectoral, provincial, and catchment level. The results were fed into the preparation of programmes, ensuring that interventions and initiatives proposed were capable of addressing the most pressing water management needs. The buy-in gained from this participatory approach was also required to encourage the multi-stakeholder support deemed essential for plan implementation.

GWP Zambia led an awareness raising campaign targeted at parliamentarians and the media. The publicity helped to maintain the momentum of the process. A capacity building programme was initiated among stakeholders with specific responsibilities for developing and implementing the IWRM/WE plan. This improvement to technical and analytical capacity of public sector officials was essential to get input from government departments, including Economic Planning, Finance, Agriculture and Energy.

Ten IWRM/WE priority programmes were incorporated into the Fifth National Development Plan 2006-2010 (FNDP). The close relationship between the two processes means that the IWRM/WE plan provides the long-term framework for water related programmes to be incorporated into the NDP planning cycle and therefore guides the identification of projects and allocation of funding from a variety of sources beyond the five years of the FNDP.

As such, the IWRM/WE plan also had a significant influence on the formulation of the Sixth National Development Plan 2011-2015 (SNDP) and its revision in 2014. Indicative sector budget and financing was set for the SNDP implementation period including an expenditure allocation for water management and development activities as outlined in the IWRM/WE plan.

The integration of the IWRM/WE plan into the National Development Planning process has resulted in increased investment in water resources management initiatives in line with the prioritised programmes identified within the plan. There is a clear upward trend in water sector budget allocation – an increase of 44%, from 43B ZK in 2013 to 62B ZK in 2016, including significant increases of the water/climate change and IWRM components of the budget.

Additionally, the framework provided by the IWRM/WE plan has been used to embed overseas development funding into national planning frameworks. For example, in 2012 a grant of EUR 950,000 was awarded by the African Water Facility of the African Development Bank to the Zambian government for a project on the development of multi-purpose small dams (identified as a priority area within the IWRM/WE plan). In 2013, the World Bank financed, to the tune of USD 50 million, a Water Resources Development Project established as part of a programme of support to the implementation of the IWRM/WE plan.

Photo: The Victoria Falls on the Zambian-Zimbabwian border viewed from the Mosi-oa-Tunya National Park in Zambia/ Wikimedia Commons. 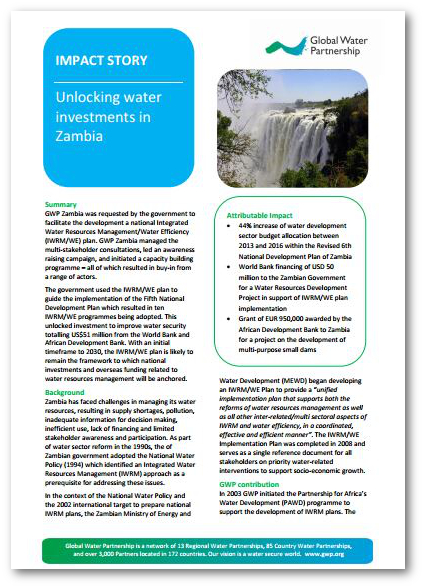 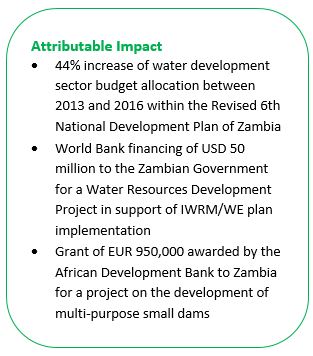