As the world’s cities experience rapid growth, the global construction industry has been expanding exponentially. As a result, the demand for and price of river sand, which is the favoured natural material to produce mortar and concrete, has also increased. In Sri Lanka in particular, demand has been rising since the early 1990s, and has taken a notable leap since the 2004 tsunami.

RSM has severe environmental, socio-economic, safety, and public health consequences. Increases in flow velocity cause river banks to erode more quickly, which can degrade land quality and damage nearby infrastructure, such as bridges and roads. RSM also lowers water tables, which can decrease water levels in dug wells, sometimes leaving them completely dry; decrease groundwater levels to the point that root systems no longer reach the water table; and increase seawater intrusion, salinization of drinking water and irrigation sources. This has grave implications for Sri Lankans dependent on household cultivation and small-holder coconut farmers.

RSM in Sri Lanka is centrally regulated through the Geological Survey and Mines Bureau (GSMB), which had limited resources until recently and was also susceptible to political pressure and consequent corruption. This weak regulatory environment, in combination with a steep increase in the demand for sand due to rising prices, led to the development of illicit RSM operations on a large scale.

It is estimated that more than 35 of the 103 rivers in Sri Lanka are subject to illicit RSM and that more than 50% of all sand used in the construction sector is sourced from unlawful operations. Additionally, a survey conducted by three SLWP partners – the Network for Women Water Professionals (NetWwater), and the Universities of Colombo and Ruhuna – found that 10 times more sand is usually extracted than RSM permits allow.

SLWP supported the Centre for Environmental Justice (CEJ) in mobilising communities to file a series of Public Interest Litigation (PIL) cases against RSM practices, which led the Supreme Court of Sri Lanka to ban RSM along the Maha Oya and Deduru Oya rivers in 2004.

This marked the beginning of a long-term campaign against RSM, organised by SLWP and NetWwater, with key support from Central Government Authorities, GSMB, the Central Environmental Authority (CEA) and Cap-Net Lanka, a country partner of Cap-Net UNDP.

The campaign aimed to supplement the recent legislative changes with community action, recognising that weak law enforcement mechanisms and legal loopholes meant that

regulations alone were not enough to fully address illicit RSM. Awareness campaigns and dialogues engaged government officials at the District and Divisional level, local authorities, media, youth, and NGOs, with a focus on transparency, accountability, and all-inclusive stakeholder participation.

Media played a big role in the campaign. Although media previously reported ongoing RSM activity, RSM was always presented as a provincial issue rather than a national one. SLWP worked to increase national coverage of RSM through media outreach. SLWP’s campaign successfully raised awareness at the national level and was instrumental in the development of the 2006 National Policy on Sand as a Resource for the Construction Industry, which sought to manage the sector in a sustainable manner. Sri Lanka passed the National Environmental Act 47, which prohibits mechanised sand mining in all rivers.

Together, these new legal frameworks have significantly increased GSMB’s capacity.

SLWP’s key partner in encouraging alternatives is the construction industry regulator, the Construction Industry Development Authority (CIDA). Together, they have organised a series of consultative and awareness-raising workshops and brainstorming sessions under CIDA’s Alternatives for River Sand in Construction programme.

As a result, many large construction firms now use manufactured sand and other recycled materials, and most road constructors get the majority of their sand from non-river sources.

In the hopes of continuing to address gaps at a smaller scale, 6 local communities in Sri Lanka created their own Area Water Partnerships, which are affiliated with SLWP. The Dedura Oya AWP, for example, has undertaken a multi-year project to rebuild river banks and replant river reservations along the Kolamuna Oya, a tributary of the Deduru Oya.

Flood waters have replenished some sections of river sediment and the water table has also recovered in many sections. Similar action has been taken in the Maha Oya and the Kelani River as well.

Overall, all RSM in Sri Lanka is now either entirely prohibited or highly regulated according to strict extraction and transportation schedules. It is estimated that this increase in regulation has directly benefitted over 300,000 people.

More stringent RSM regulation has also led to an increase in investment in alternatives to river sand.

There is however still a long way to go in providing and encouraging the use of cost-effective alternatives. A growing construction boom has seen the country’s annual sand requirement grow rapidly from around 8 million cubic metres immediately post-tsunami to over 70 million cubic metres today. 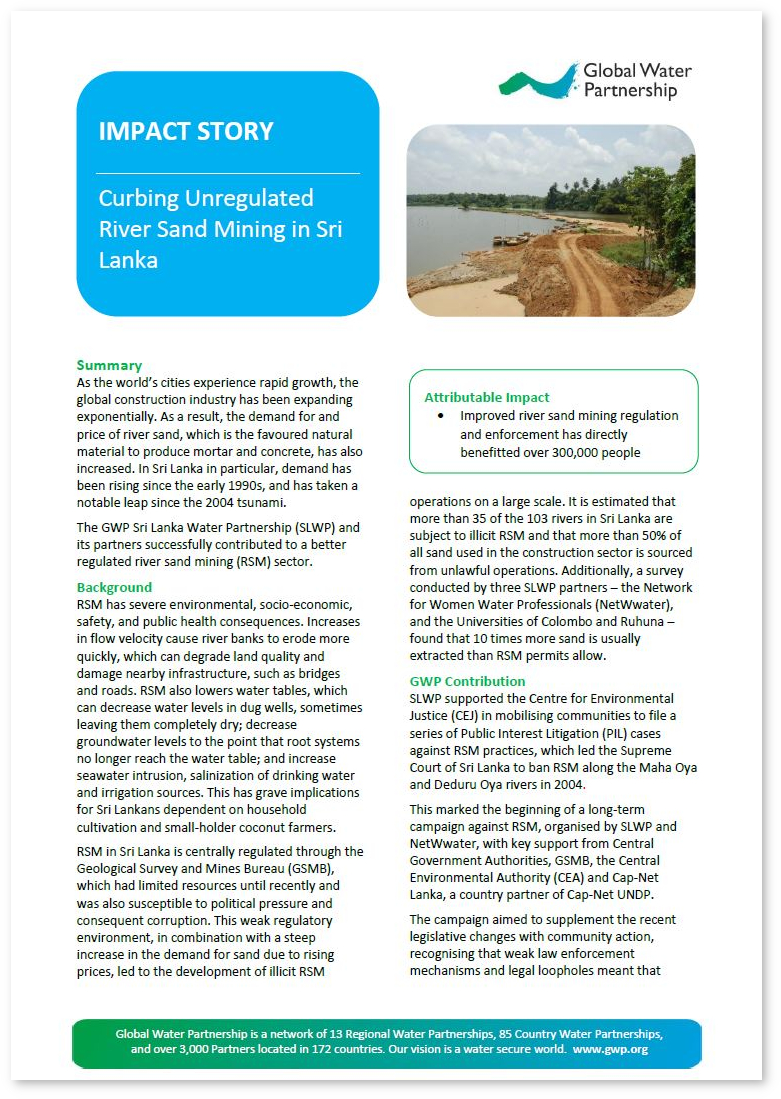