The Drin River is a complex transboundary water system and a strategic developmental resource for its riparian states. The Drin Dialogue has been instrumental in establishing transboundary cooperation to foster a basin-wide effort towards sustainable and integrated water resources management. GWP supported the establishment of this collaborative platform and has contributed to leveraging 5.5M USD for implementing the Drin Memorandum of Understanding and its Action Plan, an intervention strategy derived from this multi-Party Dialogue.

The Drin Basin covers a geographical area that includes Albania, Greece, the Former Yugoslav Republic of Macedonia, Montenegro, and Kosovo (under UN Security Council resolution 1244). Within the Basin there are diverse and often conflicting and unsustainable management approaches. This led to the degradation of the Basin’s ecosystems and inhibited sustainable economic development in the region.

Discussions regarding enhanced cooperation among the riparians for the management of the Basin started during the International Roundtable on Integrated Management of Shared Lake Basins in South East Europe, organised under the Petersberg Phase II/Athens Declaration Process[1]  and the Global Environment Facility (GEF) IWLEARN Programme, in Ohrid, on 12-14 October 2006.

The Consultation Meeting on Integrated Management of the extended Drin River Basin was held on 24 November 2008 in Tirana, under the aforementioned policy framework, and it was a stepping stone in this process.

The Ministries of the Drin Riparians responsible for the management of water resources and/or environment had a central role in its organisation and were assisted by the United Nations Economic Commission for Europe (UNECE) and  GWP Mediterranean, who were requested to facilitate the development of a shared vision for the sustainable management of the Basin.

As a response to the request, GWP Mediterranean and UNECE organised and facilitated the Drin Dialogue, a structured multi-stakeholder process. This was formally launched during an official meeting on 1 December 2009, in Podgorica, by representatives of the ministries responsible for the management of water resources and/or environment of all Riparians, apart from Greece and Kosovo, and by the existing formal joint lake basin management commissions/committees[2].

Following its contributions to the Drin Dialogue and to the formulation of a Memorandum of Understanding (MoU) between the Parties, GWP Mediterranean was appointed by the Ministers as Secretariat of the Drin Core Group (DCG), i.e., the lead body mandated to coordinate actions for the integrated and transboundary management of water resources in the Basin.

GWP also contributed to preparing the GEF Drin Project through which USD 5.5M was leveraged for the implementation of the MoU and its associated Action Plan. The GEF Drin Project is being implemented by the UNDP with GWP Mediterranean as the executing agency.

The Drin Dialogue was completed in 2011 when the riparian countries signed a Memorandum of Understanding which identified short-, medium-, and long-term actions to address problems affecting the sustainable development of the Basin.

The Drin Action Plan (DAP), structured around six action packages, was prepared to facilitate implementation of the Drin MoU. An institutional structure was set up in 2012 to follow through with the MoU’s enactment. This structure had three pillars: the Meeting of the Parties (ensuring high-level coordination), the Drin Core Group (overviewing the MoU’s implementation), and the three Expert Working Groups (assisting the DCG in its work).

The GEF Drin Project (2015-2019) was adopted to operationalise the MoU and support its institutional structure, rendering it capable of assuming its coordinating and executive role. The broader intent of the GEF Project is to promote cooperation among actors for the sustainable management of the Drin based on scientific knowledge developed within the basin, and on collaborative action.

The budget of the GEF Drin Project is 5.5M USD. The project will benefit about two million people who live and rely on the basin for drinking water, agriculture, fisheries, industry, and hydropower.

Involving stakeholders is always a difficult task but flourishing cooperation on transboundary waters in South East Europe – developed among countries that were engaged in socio-political or even armed conflict not so long ago – presents an example that the Southern Mediterranean rim could follow.

Several political and technical elements of such cooperation could be replicated provided there is political will. GWP Mediterranean works actively with regional and international partners to move in this direction.

[1] A process coordinated by the German Federal Ministry for the Environment, Nature Conservation and Nuclear Safety, the Hellenic Ministry of Foreign Affairs, and the World Bank. 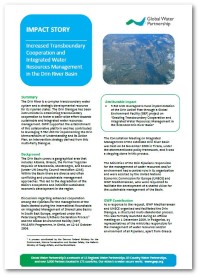