In Malawi, GWP provided long-term backing to the adoption of an Integrated Water Resources Management (IWRM) approach to water management.

This support included the development and implementation of a national IWRM and Water Efficiency (WE) plan to guide Malawi towards increased water security.

Validated in 2008, the process contributed to Malawi’s commitment to IWRM within its national planning and investment frameworks, most notably the Malawi Growth and Development Strategy (MGDS) and the National Water Development Programme II (NWDP II).

As a result, political will and awareness were mobilised among key actors, including the Office of the President, Cabinet Office, and the Ministry of Economic Planning resulting in a 64 percent budget increase to the water sector in 2005/06.

With one of the lowest per capita water availability in Africa, Malawi faces a continuous threat of water scarcity.

As with other countries in the region, a rapidly growing population intensifies the problem by increasing pressure on resources, while poor agricultural practices, inadequate waste management, and forest degradation all reduce water quality. Climate change, expected to result in more rainfall variability across the region, further increases the risk of water shortages.

The commitment to IWRM planning was formally reflected in the revised National Water Policy of 2005 which in turn informed the preparation of the MGDS 2006-2011 – the medium-term national planning framework that forms the basis of national budget allocations.

In parallel to, and in coordination with, the national planning processes, in 2004 the Ministry of Irrigation and Water Development (MIWD) initiated the development of an IWRM/WE plan as a roadmap to guide the country in addressing its key water-related development challenges.

Completed in 2008, the IWRM/WE plan provides a long-term strategic framework for a cross-sectoral approach to water resources management as well as the identification of priority focus areas to be targeted during an initial five-year period.

The facilitation of the development process was led by GWP Malawi which was already active as a multi-stakeholder platform for consolidating input to water resources and development planning.

GWP Malawi played an important role in raising awareness and reinforcing political support for the IWRM/WE plan. This included awareness raising workshops for senior civil servants representing permanent secretaries in charge of water related sector ministries. One-to-one meetings were held with key policy-makers, including briefings between GWP Malawi and the Minister for Irrigation and Water Development, and regular meetings with heads of government institutions such as the Ministry of Energy, Mines and Natural Resources, the Department of Land Resource Conservation, and the Ministry of Economic Planning and Development.

GWP Malawi provided a neutral platform that ensured the development of the plan was anchored in a fully participatory approach. An inclusive stakeholder consultation initiative was organised to facilitate input to the various steps of the planning cycle, such as gap analysis, identification of strategic components, and prioritisation of focal areas. Governmental and non-governmental stakeholders were engaged through consultations to determine the root causes of the main challenges, and to gain collective commitment for selecting and implementing the right projects to overcome the challenges.

The commitment by the Government of Malawi to IWRM has manifested itself in more progressive water governance systems. In addition to the revised National Water Policy, this includes the MDGS 2006-2011 in which an IWRM approach was explicitly prioritised and budgeted[2] for as a means of achieving water management goals, and the National Water Development Programme II[3], which adopts an integrated approach.

As a direct result of the IWRM/WE plan initiative, political will and awareness were mobilised among key actors, including the Office of the President, Cabinet Office, and the Ministry of Economic Planning, resulting in a 64 percent budget increase to the water sector in 2005/06.

The plan was prepared in close consultation with the MDGS 2006-2011 through which projects identified under the five-year plan priority focal areas were implemented. In the case of the NWDP II, the component on water resources management seeks to address the need for a robust enabling environment through the establishment of a National Water Authority, along with strengthening institutional capacity and revising enabling legislation for the 2005 National Water Policy.

Capital investments by the country’s five parastatal water boards increased from US$4 million in 2006 to US$10 million in 2010 with expenditure specifically targeting the water supply and sanitation sub-sector also doubling in the same time period[4].

[1] As agreed by Heads of State at the 2002 World Summit on Sustainable Development (WSSD) in Johannesburg, South Africa

[3] Co-financed by the World Bank (USD 50 million) and the Africa Catalytic Growth Fund (USD 25 million) among others, the NWDP II is the main platform for donor coordination within the water supply and sanitation sector in Malawi 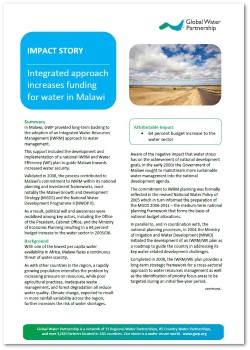