Gender Equality from Theory to Practice

Experts and practitioners gathered in Stockholm, Sweden, on 19 June to discuss the results of GWP-commissioned research on gender equality and inclusion in water management. The aim was to lay the groundwork for broader change and bring about practical steps to action.

“We need to articulate the case for water and gender better,” said Jean Paul Penrose in his opening remarks to the group. Mr. Penrose represented the Department for International Development of the United Kingdom (DfID), which along with the Institute for Sustainable Futures of the University of Technology of Sydney (ISF-UTS) and GWP were collaborators behind the event.

Mr. Penrose said that while WASH activities already have broad political and institutional support, more work is needed on water resources management: “We need to get out of our silos and become more transformative in how we think of WRM. GWP’s role could be to framework and mainstream gender issues within this.”

Gaps, opportunities, and best-practice principles for gender equality were discussed. The consensus was that economic and social benefits of reducing inequalities have already been proven, but Maitreyi Bordia Das, Global Lead for Social Inclusion at the World Bank, said she is troubled by how little we use this evidence:

“The narrative of gender and water is still stuck in an old framework of female vulnerability or women being a homogenous group.” Better use and analysis of existing data is the way forward, she said.

The complexity of the gender issue was brought up from a range of different perspectives - Lindiwe Ngwenya, Component Manager-Gender Mainstreaming with Deutsche Gesellschaft für Internazionale Zusammenarbeit (GIZ), argued the case that as long as gender is seen as 'only a women's issue' it won't be taken seriously. Rajib Ghosal, Gender and Social Specialist with the Green Climate Fund (GCF), brought up uneven power relations at community level and archaic social norms that affect any regulations set in place.

GWP Chair Oyun Sanjaasuren brought a proactive approach to arguing the gender equality case, and she agreed with the logic to use evidence and data as means to better outcomes. She shared her own calculations on how country GDPs would increase with the involvement of women in the work force.

Next steps will be to produce a strategic think piece capturing clear and practical actions that can be applied to turn theory into practice. This is expected to be done in July, along with a Scoping Paper that will describe the findings of the research, based on a literature review and experts’ interviews. 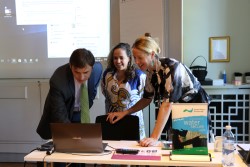