GWP Speaks to Range of Issues at 2018 World Water Week

On the first day of the conference, Sunday 26 August, the theme in the booth was on drought, with GWP’s Frederik Pischke and Robert Stefanski of the World Meteorological Organization (WMO) presented the joint HelpDesk of the Integrated Drought Management Programme (IDMP). In this short video interview, they described who contacts the HelpDesk, and why.

On Monday 27 August, visitors at the GWP booth were invited to talk about how they can #ActOnSDG6 – which is the GWP campaign that calls on action to prioritize the Sustainable Development Goal on water (SDG6). A selection of the visitors were captured in videos on GWP’s Facebook page, and can be viewed here.

Tuesday 28 August, youth in focus, and they were encouraged to visit the GWP booth to ask anything they want to know about internships with GWP. Youth was also the theme on Wednesday 29 August, when GWP spent a full day with its partners of the Youth for Water and Climate (YWC) platform in the Young Professionals Booth – where the new platform was showcased and successful projects presented at a poster market place. For the first time for YWC, two Quality Assurance labs were conducted, where youth leaders had the opportunity to meet with senior professionals and get valuable feedback on how to improve their projects.

On Wednesday, the theme of the day in the GWP booth was the new GWP Strategy, which the network has begun working on – GWP’s Executive Secretary Monika Weber-Fahr was at hand to discuss with anybody who wanted to share their thoughts on what the new strategy should look like.

Thursday 30 August was the final day of booth activity, and the theme was IWRM, and how it can be made reality – GWP’s IWRM ToolBox was featured throughout the day.

In addition to the booth, and the wide range of sessions covered throughout the week, GWP also convened a few of its own events during the week, such as a 10-year celebration of GWP Mediterranean’s work with the Coca-Cola Foundation on Non-Conventional Water Resources, and a high-level gathering to move forward the Africa Investment Programme. 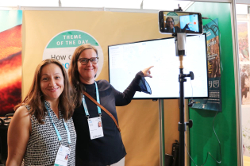 YWC in action at SWWW 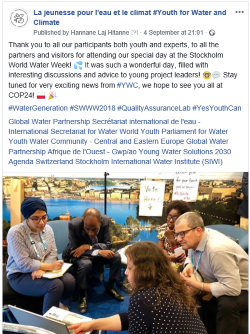