GWP launched its new Youth Engagement Strategy at Stockholm World Water Week on 25 August. The youth strategy supports the wider GWP “Towards 2020” Strategy as does the GWP Gender Strategy, which was launched in August 2014.

In her speech at the launch event, GWP Chair Dr. Ursula Schaefer-Preuss stressed the importance of including young people early in the decision-making processes. She also pointed out that we mustn’t forget that there are people behind every decision; it’s not all about technical procedures.

Speaking at the launch was also Pascal Bonnetain, who is the Secretary General of the France-Quebec Office for Youth (OFQJ). He said that youth adapts quickly to new needs, and the digital era with the internet opens up many new opportunities for youth to act.

Earlier this year, GWP and OFQJ initiated a youth project to mobilize francophone youth around water ahead of the up-coming climate summit in Paris, the COP 21.

One of the young people involved in the francophone youth project is Luzma Nava Jimenez, who gave an overview of the project, currently being implemented in nine countries. She said that young people are very well aware of the seriousness of the climate situation in the world, and that they have the knowledge and willingness to help : “All we need is to be heard, considered and integrated in the decision-making process.“

Asma Bachikh, Chair of the World Youth Parliament for Water (WYPW), also spoke at the event. She said it’s essential for youth organisations to work together, instead of spreading their energies too wide. “Let’s not repeat the mistakes of the previous generations, but rather concentrate our efforts to have a unified, strong voice.”

GWP Acting Executive Secretary Rudolph Cleveringa wrapped up the launch event by saying that the new strategy was not a one-off project – “It’s the product of a whole process that started many years ago” – acknowledging the many actors behind the youth strategy. He also concurred with Ms. Bachikh’s call for cooperation and said the time has come to work together. 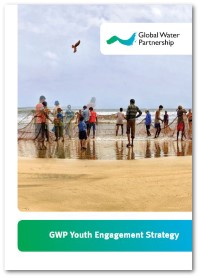 Clips from the Launch