The Change Agenda was a big topic at this year’s GWP’s annual Regional Days, which took place in Stockholm 10-13 May. As the network is preparing the 3-year work programme (2017-19), discussions were held on how the network can stay relevant and continue as a frontrunner on global water issues in an ever-changing environment.

Each region produced a draft version of their 2017-2019 work programme ahead of the Regional Days to discuss with colleagues from other regions. The starting point was lessons learned from the first half of the strategy period, a re-examination of regional priorities, identification of new implementation pathways and mechanisms, and the need to raise funds locally.

This year GWP celebrates its 20th anniversary, which makes self-reflection even more important. When the network was launched in 1996, its role and focus was clear – to advocate and promote for the adoption of Integrated Water Resources Management (IWRM). Today, 20 years later, the context has changed. The IWRM approach has been widely adopted in a number of regional and national policies; IWRM Plans have also been developed at various levels in order to facilitate implementation. The demand now, and in recent years, is to move from concept to practice – despite adoption of IWRM, the world still faces critical water challenges.  In 2015, the World Economic Forum recognized water crises as one of the top 10 global risks to business and economic development.

This was something that new GWP Technical Committee Chair Dr. Jerome Delli Priscoli reflected on as he took part in his first Regional Days as Chair; he stressed the importance of adaptation to climate change – an issue that GWP and other international organisations need to embed more and more in their work.

Another new addition to the GWP network was announced at the meeting: new Chair Dr. Oyun Sanjaasuren. In the printed announcement, she said, “The world today is facing a number of challenges that are complex in nature and require a concerted effort of all of us. Ever-increasing population growth and demand for food, energy, and water will need solutions. If we continue the same path, we will need multiple planets by the end of the century!” 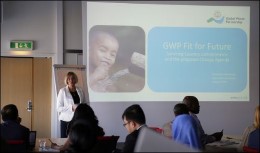 Voices from the GWP Regions