If you are part of the GWP network, chances are that you have met GWP Head of Network Operations, Jacques Rey. He is coordinating GWP programmes in the global secretariat in Stockholm, and has been involved from the beginning of GWP, way back in 1996. Here he reflects on his history with the network.

“I was invited to the founding meeting of GWP in August 1996. It was held in the China Theatre in Stockholm, and a lot of people were there, perhaps as many as 300,” he recalls.

At the time, Rey had a background of working with the International Water Management Institute (IWMI) in Sri Lanka, and had started building a Network in the “water world”. This is why contacts in GWP’s founding organisations – UNDP, World Bank and Sida – invited him to the inaugural meeting of a new global water organisation, something that didn’t exist until then.

Around the same time, a similar organisation, World Water Council was created, but to be more of a policy think-tank, while GWP focused on regional programmes to develop and apply Integrated Water Resources Management (IWRM) on the ground, explains Rey.

It was a rather informal meeting, Rey says of the first meeting, with a lot of enthusiastic discussions. By the end of it, GWP was born. The basic structure was agreed: the organisation had statutes, a Steering Committee, and an interim Technical Advisory Committee (TAC) was confirmed.

Three full-time people were to be based in the secretariat in Stockholm which was a penthouse flat in the same building where Sida had its offices. These three were two Network Officers and an Administrative Officer, under the leadership of a part time Executive Secretary. Jacques Rey was one of the two first GWP Network Officers. Additionally, a small team worked in Copenhagen with the TAC Chair, helping with the initial stages to set up regional groups around the world.

“The first few years we started the network in about 2 regions per year”, says Rey, who also contributed to drafting the first strategy for GWP. This was completed in 1997.

“The first strategy was based on connecting three pillars: programmes, regions, and finance. The programmes we considered were not necessarily new ones; we were focusing on synergies, matching demands and needs and cross sectoral coordination.”

This build-up phase of GWP went on until the Second World Water Forum in 2000, at which point the network had established several national and regional platforms. These led to the publication and presentation of GWP’s overall “Framework for Action”, meant to be the operational response to the “Water Vision” prepared by the World Water Council.

A Break from GWP

In 2000 Jacques Rey left GWP, but was called three years later to work as a consultant for the network. He coordinated the development of a second strategy for GWP, which became the 2004–2008 Strategy, and contributed to the start-up of the Partnership for Africa’s Water Development Programme (PAWD).

Over the next years, Rey kept following GWP's evolution from a distance. He was yet again commissioned part time when the next Strategy 2009-2013 was to be implemented and the related programme management structure and monitoring and evaluation framework was to be established. A number of important steps were made during this period, such as the introduction of the Water, Climate and Development Programme (WACDEP).

Rey became more and more involved with the network again, and when the then Head of Network Operations, John Metzger, decided to move to the Zambezi Watercourse Commission (ZAMCOM), GWP asked Rey to step into this role.

Asked about what memories stand out during these 20 years of being involved with GWP, Rey immediately points out the beginning – the creation of GWP – as a highlight.

“GWP triggered many interesting debates those first years, and there was a lot of enthusiasm in everything we did”, says Rey.

Some of that enthusiasm is still there, he says, as he tries to think of challenges that the network has met with: “There is no problem that cannot be solved within this organisation, there is enough flexibility in the system to deal with issues that come up.”

“Perhaps the most challenging time is right now, as we turn 20. I feel there’s a generational shift going on, and we have to make sure that the organisation keeps its feet on the ground and remains attractive for new partners coming onboard. GWP will certainly look very different 10 years from now, but it will still be a global action platform,” says Rey.

He adds that he still believes in the fundamental idea that GWP has the capability of making progress in water issues through broad operational partnerships: “It’s all about providing meaningful connections. If we can give a small NGO – or any other type of partner – the opportunity to not only be heard in their local setting, but also contribute to and benefit from a national or broader regional setting, even global, then we have fulfilled one of our very key objectives,” says Rey.

GWP in Action - in Pictures 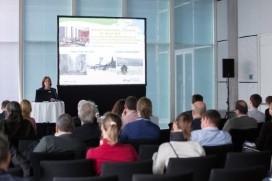