Water insecurity costs the global economy some US$ 500 billion annually, according to Global Water Partnership (GWP). That figure does not take into account environmental impacts so the total drag on the world economy could be 1% or more of global Gross Domestic Product (GDP).

GWP released these figures based on the report Securing Water, Sustaining Growth, written by an international task force convened by GWP and the Organisation for Economic Co-operation and Development (OECD). The report looks at water’s destructive force as well as its contribution to human health and prosperity.

Flood damage is estimated at US$120 billion per year from urban property damage alone, while major droughts were found to reduce per capita GDP growth by half a percentage point. Investing in water security would mitigate many of these losses and promote long-term sustainable growth.

The costs related to inadequate water and sanitation services in developing countries are estimated by the World Health Organization (WHO) at US$ 260 billion a year. For very poor countries this cost may be 10% of GDP. In agriculture, water insecurity is estimated to cost existing irrigators US$94 billion per year.

The report, published by the University of Oxford, feeds into a Policy Statement issued today at the 7th World Water Forum in Korea. The statement calls on governments to invest in water security, in risk management, and in people and partnerships. The statement urges that special attention be paid to social risks, with a focus on vulnerable segments of society.

“Achieving water security means meeting the needs of both human beings and ecosystems,” said Ursula Schaefer-Preuss, Chair of GWP. “It requires fundamental changes in values, beliefs, perceptions, and political positions, not just among water management institutions but among all stakeholders, including the vulnerable.”

The call for action in Korea comes at a time when world leaders are negotiating a new post-2015 development agenda, which should be adopted at the U.N. General Assembly in September. This includes a set of Sustainable Development Goals, one of which calls for ‘ensuring the availability and sustainable management of water and sanitation for all.’ This new report reinforces the urgent need for that goal.

The relevance of the report and the Policy Statement has been borne out by recent news of South Africa’s worst drought in 22 years, the Atacama region of Chile experiencing its worst flood in 80 years, and the governor of California mandating a massive reduction in water use due to unprecedented drought.

“Investing in water security will drive sustainable growth,” said OECD Secretary-General Angel Gurría. “These investments must be well-planned, fit with broader development agendas, benefit local communities and the environment, and be flexible enough to adapt to changing circumstances.”

According to the report, South Asia has the largest concentration of water-related risks. East and Southeast Asia face rapidly increasing flood risk, although the United States has the greatest exposure to flood risk. Sub-Saharan Africa is the only region where the risks of inadequate water supply and sanitation are rising. North Africa has the greatest percentage of population at risk of water scarcity.

The report and Policy Statement draw on GWP’s country-level consultations on water security so that the voices of local stakeholders would be heard at the global level. The consultations brought together 2,200 participants in 40 countries in 2013 and 2014. The report also builds on OECD’s work on Water Security for Better Lives.

GWP and OECD launched a Global Dialogue on Water Security and Sustainable Growth to highlight the evidence of the different development paths that countries can follow based on their water resources endowment. The task force was co-chaired by Claudia Sadoff, David Grey, and Jim Hall.

Global GDP is in the region of US$ 74-77 trillion. Various figures in the report indicate that water insecurity is a US$ 474 billion drag on economic growth annually. To account for other losses (e.g., drought) and given that the figure does not take into account environmental costs, GWP rounded the figure up to US$ 500 billion.

GWP: The GWP mission is to advance governance and management of water resources for sustainable and equitable development. GWP is an intergovernmental organisation and a global network of 13 Regional Water Partnerships, 85 Country Water Partnerships and more than 3,000 Partner organisations in 178 countries. www.gwp.org

OECD: The OECD mission is to promote policies that will improve the economic and social well-being of people around the world. OECD work on water focuses on water economics and governance. www.oecd.org/water 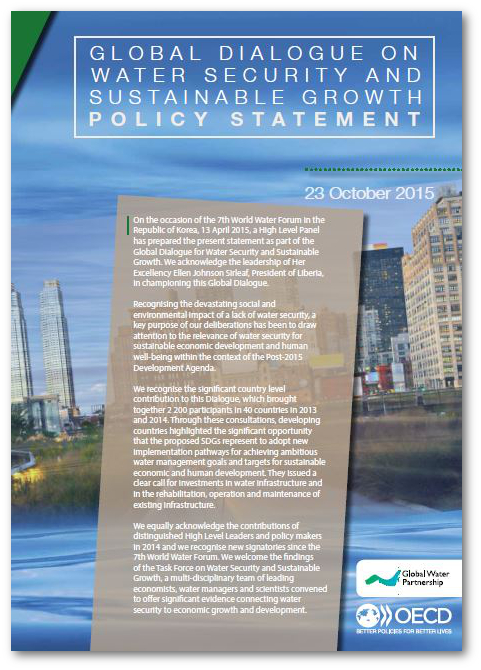 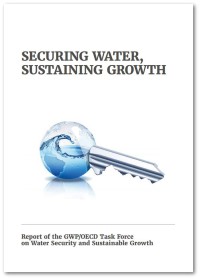 David Grey on the Global Dialogue