GWP Central America Assessment of the Drought of 2014

GWP Central America, through the Water, Climate and Development Programme, has developed a socioeconomic analysis of the sectoral impact of the drought of 2014 in Central America. The study concludes that losses are substantial in the agriculture, hydropower and water services sectors – exceeding US$ 650 million.

In 2014 a drought – linked to a period of “El Niño” – affected Central America. It had severe effects, especially to the Dry Corridor of Central America and the “Arco Seco” in Panamá.  The driest months were July and August, although in some countries, the heat wave began in June. There were between 30-60 consecutive dry days in many areas of every country, many of them located in the Dry Corridor.

The aim of GWP Central America’s analysis was to contribute to the prioritization of investments related to the management of risk from extreme weather events, with emphasis on those related to improved water resource management.

The result provided an estimate of the cost in sectors that are of economic importance to the region and that are affected significantly with the decreasing of precipitation.

The economic impacts of drought manifest through different routes or paths, depending each sector. For example, when there is drought in the agricultural sector, this triggers a series of
events: the loss of crops due to drought not only affects the producer directly, but it can also generate a rise in prices impacting consumers of that product. In the case of hydropower, a reduction in rainfall means that the capacity of the plant decreases because it depends on the hydraulic forces. The region will normally turn to thermal generation based on fossil fuels. In the WASH sector, a decrease in rainfall usually means higher operating costs. 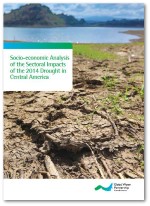