“Action on water is an absolute and ethical imperative…Acting now is a matter of human dignity, justice, and survival. Waiting to act is no longer an option.” This was one of the strong messages of the Budapest Water Summit 2016, which took place 28-30 November in Budapest, Hungary. GWP global and GWP Central and Eastern Europe joined forces to represent the network at the event.

Under the patronage of Hungarian President János Áder and organised by the Hungarian Government in cooperation with the World Water Council, the mission of the Summit was to make water a source of cooperation, peace, and development for all the countries committed to sustainable development. The Summit gathered high-level politicians, members of the scientific, business and financial sector,s and representatives of civil society from 117 countries. “Water has to be high on the international agenda,” said President Áder in his opening speech.

The Women's Forum of the Budapest Water Summit, the first of its kind, was opened on 29 November by GWP Vice Chair Alice Bouman-Dentener, where she said, “Gender equality, like access to water and sanitation, is key for development of a healthy and prosperous society.”

Responsible for organizing the Women's Forumwas H.E. Ms Viktória Horváth, Ambassador at Large for Special Foreign Trade Initiatives, Ministry of Foreign Affairs and Trade,Hungary. She emphasized that this was a historical step for the Central and Eastern Europe region to connect the water issue with women’s issues: “We need to talk about why women and water connect, because in this region, it is not so obvious.”

On the last day of the Summit, GWP Vice Chair Alice Bouman-Dentener reported back to the plenary on the outcomes of the Women’s Forum. One of the take away messages was: “It is high time to go beyond the rhetoric of women’s central role in the provision, management and safeguarding of water (Dublin Principle 3) and put this longstanding principle into action by taking positive measures to facilitate women’s agency. This applies to both the professional and traditional roles of women.”

Organised by GWP Hungary, the Youth Forum convened future decision-makers who shared the results of efforts to implement SDGs at the local, regional, and international level. By fostering space to create linkages, the Youth Forum aimed to promote future international cooperation on solving pressing water issues.

To the question of whether youth want an evolution or a revolution, the answer was, “We want to change the world!” Building on its “Youth for Water and Climate” initiative, GWP organised a session on How can we support action of the youth? discussing a global partnership to support youth-led projects.

Since 2015, together with partners World Youth Parliament for Water (WYPW), Water Youth Network (WYN), and L’Office franco-québécois pour la jeunesse (OFQJ), and more, GWP has been active, starting a process at COP21 by producing a white paper of recommendations by youth on climate change action. Implementation of the recommendations has begun at ground level and shows huge potential for upscaling. The messages have been echoed since then in the Nantes Summit 2016 (‘Climate Chance’) which issued a declaration explicitly recognizing the inclusion of Youth, World Water Week in Stockholm, and COP22.

After much lobbying, youth was also recognised in the final Budapest Water Summit 2016 Messages. Youth representatives were part of the drafting committee. Chisala Kapupu from the Southern African Development Community (SADC) Youth Forum, was one of them. “Youth was treated as equals and voiced out really strong messages... We have been pushing for youth engagement in these high-level panels and it’s happening…I’m very optimistic about the future,” she said.

President Áder also visited the Youth Forum, greeting the winners of the Stockholm Junior Water Prize saying, “We have high hopes for the young generation!”

In the closing session of the Youth Forum, GWP’s Executive Secretary Rudolph Cleveringa stressed that youth curiosity should be turned into a driver and that content is key. He also emphasized the importance of reaching the people outside the water box: “We need to explain in clear language what we are doing. No jargon!”

One of the highlights of the Summit was the photo campaign organised at the GWP booth. More than 330 supporters from different organisations and institutions came by to participate and to have their say.

Actions for the 2030 Agenda

On the importance of the Budapest Water Summit, one of GWP CEE’s partners said, “The Budapest Water Summit is really important because it keeps the momentum of the SDGs and in particular of Goal 6 on freshwater. We have to keep political momentum and this is the right format for it,” said Ivan Zavadsky, Executive Secretary of the International Commission for the Protection of the Danube River (ICPDR).

Top photo: The GWP photo booth campaign was a success, with over 300 people coming by to share water messages. 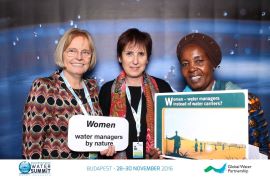