“Black Swan”, a melancholic arrangement with plastic waste bags and contrast to a living, white swan, was created by Iman Maljić of Aleksa Santic School in Sarajevo. It out-competed 611 other artworks from 190 individual schools, involving 1314 children in 11 countries of the Danube River Basin.

Second place was given to “Disappointed fisherman” by Ionela Chercheja of Mihai Eminescu Lyceum in Ghindesti, Moldova. The artwork “Danube - the history living with us” by Balázs Bokor, Kristóf Börzsei and Boglárka Kovács of Lébényi általános iskola és AMI in Lébény, Hungary, won the third place.

This year’s Danube Art Master competition came with a special twist: while the young artists participating were still working outdoor with materials found at local rivers and lakes, they were called to build costumes and outfits from them. Photographs taken of the “Danube Masquerade” were then submitted to the international jury. 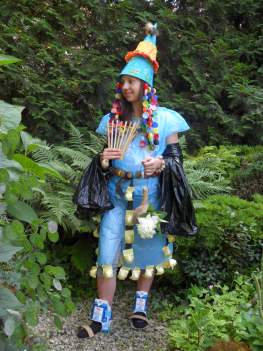 The Danube Art Master is a popular competition organised annually by the ICPDR with support from the “Green Danube Partnership” from the Coca-Cola System through Global Water Partnership Central and Eastern Europe. Held since 2004, it is popular among young artists from throughout the Danube River Basin.

You can view all national winners of the Danube Art Master 2015 on the Facebook page of the competition, including the top 10 contributions from the individual countries.

Source:  International Commission for the Protection of the Danube River

The Danube Masquerade in Knjazevac, Serbia