National dialogue on the impacts of drought in Kosovo

The Office of the Prime Minster of Kosovo in cooperation with Global Water Partnership organized a National Drought Dialogue on 12 November 2014 in Pristina.

The goal of the dialogue was to discuss drought management in Kosovo, identify gaps and define follow up activities. On government's request, Global Water Partnership (GWP) joined to assist with its knowledge and experience from the Integrated Drought Management Programme.

More than 30 participants from different economic sectors and levels of administration took part in the dialogue. It brought together the Office of the Prime Minister, Kosovo Hydrometeorological Institute, Deutsche Gesellschaft für Internationale Zusammenarbeit (GIZ), UNDP, Agency for Emergency Management, Hidromorava Gjilan, youth representatives and others.

In the beginning, GWP global and regional activities were presented. Experts of the Integrated Drought Management Programme in Central and Eastern Europe then continued with presentations of drought management guidelines and demonstration projects.

Elena Fatulova explained seven steps for development of drought management plan as part of the river basin management planning. János Fehér presented results of small water retention measures and how remote sensing data can be used for monitoring and forecasting drought. The latter presentation was especially interesting for the participants, since data gap is one of the main problems. 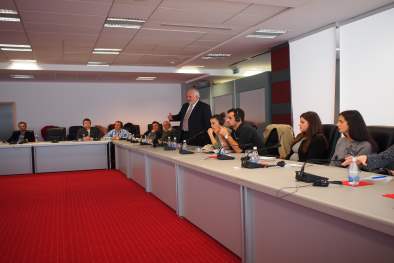 "Although drought management framework was prepared after major drought in 2006, it didn't work this time and there was no follow up on lessons learned" emphasized Bashkim Kastrati from Kosovo Hydrometeorological Institute. Mr. Kastrati presented current drought monitoring and warning system in Kosovo.

"Already moderate drought in year 2013 almost brought Pristina to its knees," said Baton Begolli, Water Policy Advisor at the Office of Prime Minister. "All institutions need to be more proactive", he concluded with regard to lessons-learned on water supply during drought in 2012-2013.

The only drought management plan in Kosovo was developed for the water supply company Hidromorava Gjilan with the support of GIZ. Currently, guidelines for six regional water companies drought plans are under preparation. 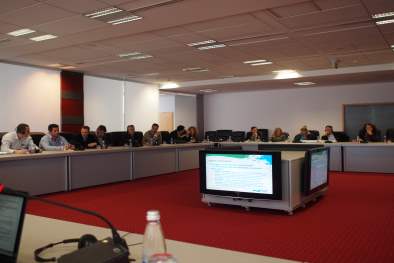 During the discussion, the participants identified several gaps such as institutional setting, cross-sectorial cooperation and lack of human resources. Another important conclusion was that decision makers and users need better surface and groundwater data for monitoring and proactive drought management.

One of the main recommendations of the dialogue is to produce drought management plans as an integral part of the river basin management plan. At governance level, there is a need for an independent river basin authority. In order to be better prepared for future drought, integrated risk assessment should cover local municipalities and water companies.