An Action Plan for Water Management in Mali

GWP led the technical preparation of Mali’s Integrated Water Resources Management Plan and acted as an “honest broker” to lead national and local dialogue. The dialogue involved parliamentarians and representatives from the private sector who helped to identify water security priorities. GWP organised a donor roundtable to mobilise financial support for the implementation of the plan, which unlocked investment of about 6.5 million euros from the Danish and Swedish governments, the African Development Bank, and the national budget.

In 2002, the World Bank published a study of the Mali water sector which identified a lack of institutional coordination, limited capacity, inadequate funding mechanisms, and insufficient data collection. This affected access to water and sanitation, national food security, and vulnerability to climate change. The conclusions prompted the Malian government to develop an Action Plan for Integrated Water Resources Management (AP-IWRM) led by the Ministry of Mines, Energy and Water (MMEW).The planning process was initiated in the context of ongoing governance reforms, including administrative decentralisation, harmonisation of laws and regulations, and increased stakeholder engagement. It was also a direct response to a new National Water Code, passed in 2002, which issued legislation for the water sector, defined institutional responsibilities, and stipulated catchment scale management of water resources. Beyond the water sector, the AP-IWRM process was also embedded within the National Strategic Framework for Growth and Poverty Reduction in which water was a priority sector. At the international level, the plan fulfilled Mali’s pledge to develop an IWRM Action Plan according to commitments made at the West Africa Conference on IWRM (1998) and the Johannesburg World Summit on Sustainable Development (2002).

In 2003, GWP signed a Memorandum of Understanding with the MMEW, which formally mandated the National Directorate for Hydraulics (NDH) to facilitate the development of the AP-IWRM in collaboration with GWP. The process took place between 2004 and 2007 and followed the GWP standard IWRM planning management cycle (see box, right). Throughout the process, GWP played a key role in creating ownership of the IWRM concept by publishing training materials, organising capacity building workshops, and mobilising actors and partnerships.After the completion of the AP-IWRM, GWP organised a donor roundtable to mobilise financial support for the implementation of the plan.

The Mali national AP-IWRM was adopted by the Government of Mali in April 2008, including specific actions for plan implementation. During development, the AP-IWRM also influenced governance change processes, such as the adoption of a new water policy document based on IWRM principles in 2006, and the revised Strategic Framework for Poverty Alleviation, also in 2006, which emphasised the sustainable management of water resources and incorporated new indicators on monitoring the Millennium Development Goals for the water sector.

In addition, synergies were created with the National Strategy for Safe Drinking Water Supply and Development, and the Strategy for Water Resources Monitoring. The GWP donor roundtable resulted in commitments from both external donors and the Government of Mali.

The AP-IWRM continues to form the basis for overseas development funding for water management in Mali. In December 2014 the Swedish Government committed a further 1.3 billion F CFA (approx. 1.9 million euro) for the implementation of a 3-year project to continue the development of the national water information system. 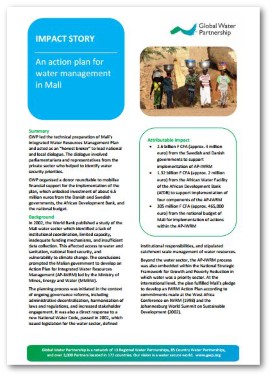 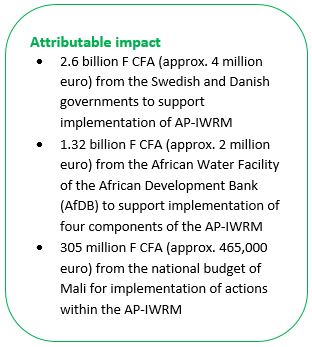