GWP supported the development and implementation of a National Integrated Water Resources Management (IWRM) Roadmap in The Gambia to guide the country towards increased water security. Validated in 2009, the implementation of the Roadmap has received approximately €2 million in funding from the African Development Bank and has led to the establishment of a Country Water Partnership.

Despite the presence of substantial surface and groundwater resources, by the early 2000s water security in The Gambia was under threat. Increased abstraction in concentrated areas was leading to water scarcity, a lack of wastewater treatment was polluting resources, and reduced flows in the Gambia River was advancing saline intrusion to surface and groundwater sources. The country was poorly equipped to deal with these problems due to fragmented and sector-based management structures. In addition, outdated legislation from 1979 resulted in weakly defined institutional roles and responsibilities for water resources management.

In recognition of this, the 2006 National Water Resources Policy (NWRP) was developed with the aim of strengthening governance frameworks. There was a need to better apply basic principles for resource conservation, environmental protection and equitable distribution. This led to the development of an IWRM Roadmap to act as a blueprint for putting the policy into action.

The process to develop a Roadmap started at the end of 2007 under the responsibility of the Ministry of Fisheries, Water Resources & National Assembly Matters (MoFWRNAM). It was managed under the framework of the United Nations Environment Program (UNEP) project, “Improving Water Management and Governance in African Countries through Support in Development and Implementation of IWRM Plans”. The Roadmap was validated in May 2009.

The project was implemented through a partnership with UNEP, GWP West Africa, the Water Resources Coordination Center (WRCC) of Economic Community Of West African States (ECOWAS), and the UNEP-DHI Centre for Water and Environment (UDC).

As part of the team, GWP had the role of mobilising stakeholders and building their capacity to contribute to the Roadmap. Stakeholders from government, the private sector and civil society were brought together to form an ad hoc committee through which input to the process could be structured.

Three workshops and a national dialogue were organised during the stock-taking, preparatory, and planning phases with the aim of eliciting input, gaining political and non-governmental buy-in, and establishing previously absent communication channels.

Additionally, GWP had a key role in enabling the development and accreditation of a Gambia Country Water Partnership as a platform for multi-stakeholder involvement in water resources planning and governance reform.

The finished Roadmap contains 13 priority actions covering areas such as governance reforms, capacity building initiatives, and project development. These are necessary for the effective and sustainable management of the nation’s water resources in accordance with IWRM principles. Implementation of the actions is in the time frame of 2009-2015, after which progress will be reviewed and a new roadmap developed.

The Roadmap process succeeded in generating political buy-in from the MoFWRNAM. This commitment has led to an ongoing reform process to provide institutions and entities responsible for water management with renewed legal authority and administrative tools to manage the resource in an equitable way – a key component of the Roadmap. The Roadmap provides a framework for The Gambia’s development partners to target technical and financial support aimed at achieving water security.

In 2010, funding of almost €2 million was secured from the African Water Facility of the African Development Bank (AfDB) to implement a project on water sector reform, with the Gambian government contributing a further €100,000 through in-kind support.

The objective is to support the implementation of IWRM in The Gambia in line with the National Water Policy and the IWRM Roadmap through institutional capacity building, stakeholder engagement, and improved information management. This project closely mirrors the priority actions identified in the Roadmap and is currently the main means of Roadmap implementation.

In addition, in 2012 a Gambia Country Water Partnership (GWP Gambia) was set up to coordinate national water resources management work through the facilitation of participatory planning processes, provision of technical assistance, and mobilisation of funds for IWRM implementation. The establishment of GWP Gambia followed a request from the Government and fulfils a key implementation milestone outlined in the Roadmap. 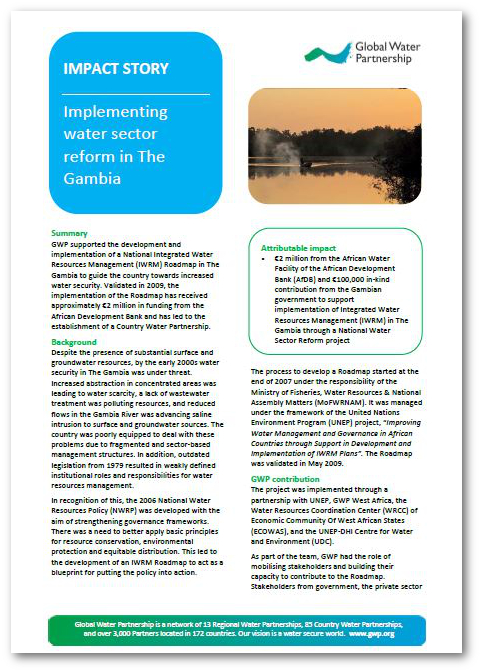 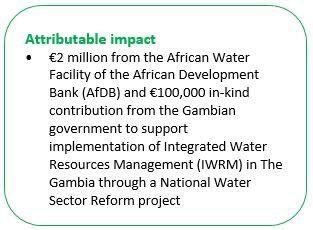