GWP Armenia teamed up with the local government in Parakar, and an engineering consultancy, to implement an affordable solution to prevent the discharge of untreated sewage into the environment. The solution enabled the reuse of treated wastewater which increased the water supply for irrigation, thereby improving agricultural productivity and food security.

Located on the outskirts of Armenia’s capital, Yerevan, Parakar has a population of around 10,000 who are mainly employed in agriculture, horticulture, gardening, and animal husbandry. In the mid-1990s, Soviet-era pumping infrastructure that transported wastewater to the centralised plant serving Yerevan ceased to function. This led to untreated wastewater being discharged into open channels in the village which provided irrigation for agriculture.

Another consequence was intestinal diseases with an increased risk of epidemic outbreaks through direct exposure to untreated wastewater, as well as contaminated groundwater and drinking water.

Large areas of previously cultivated land were abandoned due to the pollution and lack of clean water for irrigation. The region is water-scarce and the situation is expected to grow worse due to intense and frequent periods of drought as a consequence of climate change.

From the outset it was clear that community involvement was needed to develop technical and financial plans acceptable to the local population.

Special attention was given to awareness-raising and capacity building among communities and the local administration on the need for a wastewater system. Stakeholder consultations were held, empowering the community, and important to build ownership of the project thereby enhancing sustainability.

To integrate the principles in policy and governance, GWP organized a workshop with partners and the national government to identify the conditions for promoting alternative approaches for urban wastewater treatment. This included the legislative, institutional, and financial framework. The aim was to create an enabling environment for implementation, and replicating the approach in other parts of Armenia.

The construction of the treatment facilities was carried out in the first stage of the project between 2010 and 2012. This was followed by a second stage – financed through a combination of local funds and funds allocated through GWP’s Water, Climate and Development Programme  – which added a naturally aerated biological treatment pond system, enabling secondary treatment through aquatic plants.

The choice of technology is a good example of an integrated solution where heath, economic, and environmental needs are addressed simultaneously. In the context of climate change, the reuse of wastewater ensures a reliable supply of irrigation water, less dependent on rainfall, which makes it a low-regret solution. Treated wastewater becomes a resource, boosting agricultural productivity and strengthening resilience to climate change.

The non-conventional technology had the advantage of being relatively cheap to build (compared to reconnecting the village sewer system with Yerevan’s centralized wastewater infrastructure). To pay for continued operation and maintenance, wastewater treatment charges and charge fees for using the treated wastewater for irrigation is collected from households.

In the context of the ongoing initiative to rehabilitate the country’s wastewater management, the Armenian government has shown considerable interest in upscaling this technology elsewhere in the country. 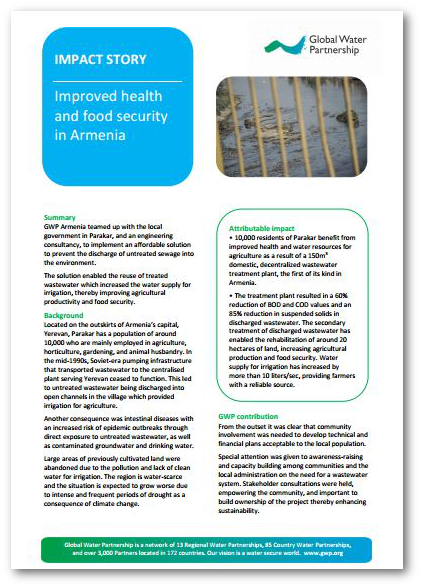 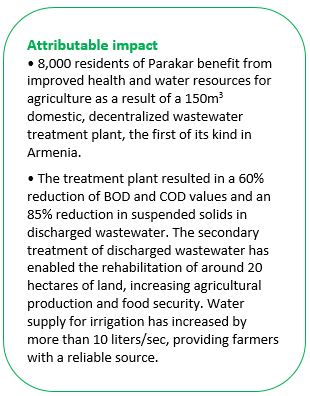