GWP’s “Follow-the-Sun” Network Meeting concluded, after 29 hours, on Friday 28 September. The meeting, which was held in 15 consecutive multi-point video conference sessions over two days, engaged over 400 Partners across the world, in nearly 50 countries. The main aim was to seek insight for GWP’s Strategy development, in addition to statutory tasks. “We have a powerful story”, said GWP Executive Secretary Monika Weber-Fahr in her concluding remarks.

The meeting gave GWP Partners an opportunity to engage directly with other Partners and with their regional and global peers, and they were able to contribute to the new GWP strategy that is being developed. It was the first time that GWP used a so-called "Follow-the-Sun" format, which allowed GWP to consult with Partners throughout the network over a 29-hour period.

The Partners participated in a 2-hour session in each region (in their language and time zone), before handing over their input to next region. The Network Meeting culminated in a summary and forward-looking global session at the end.

All sessions were broadcast live on GWP’s Facebook page. The recording of these sessions can be accessed here – in the order they were broadcast (with some overlapping in the beginning and end of all sessions):

Partners at the center of GWP’s work

“It was an important signal to our Partners – who are and will be at the center of GWP’s work. We showed them that their voices matter, and that they get stronger when they join together,” said GWP Executive Secretary Monika Weber-Fahr after the meeting.

In her concluding remarks, she shared three reflections:

“What came across in all regions is a strong sense of urgency, combined with the practical experience of many Partners for doing work on the ground and making change happen. In many places, also frustration of being left alone, of needing more resources and trying to find out where these resources could be found. There was also a strong request for more active knowledge sharing across the network, “ said Weber-Fahr.

It will take some time to go through all comments and input from the 29 hours, and this is work that will be taken seriously.

“We are feeding all of this into the Strategy process. We will make sure it influences and becomes part of the Strategy. There are things already happening that can be further amplified. We will be communicating back to the Partners that took part – we need to show the appreciation of the time that everybody has taken to influence us. We also need to recognize that through this new way of engaging, we have raised expectations - people have come into rooms; have shared their perspectives in situations which they normally aren't as much,” said Weber-Fahr.

“We have a powerful story. This 29-hour Network Meeting not only demonstrated that, but also gave us further energy to work on new stories that need to get out. Being the voice of water, and creating space for all Partner voices to come out, is one of the foremost roles for GWP, and one that we will take on in the months to come - building on the riches that have been shared during these hours,” said Weber-Fahr.

The Meeting in visuals

To visualise the content of the discussions that took place, graphical recordings were made of the sessions – here are links to all 15: 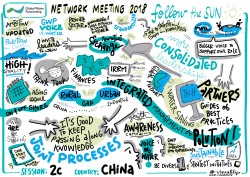