This month, Howard Bamsey began his duties as the new Chair of GWP. He did so with a visit to the global secretariat in Stockholm, Sweden, where he met staff and got briefed on current issues around the network. We took the opportunity to discuss his thoughts on joining GWP, and his reflections on some of GWP’s most recent activities at the UN climate change conference, COP24, in December.

For many years, Mr. Bamsey has been a prominent leader in public service and diplomacy in the environmental field, particularly climate change. His most recent role was as Executive Director of the Green Climate Fund (GCF). While focusing on climate issues, water has been on Bamsey’s radar for a long time as one of the key elements within climate change.

“Water is very often the first casualty of climate change. An effective global response to climate change must comprehend all the water problems that GWP thinks about and seeks to remedy. And we see some genuine engagement, not just by governments, but by civil society and other parts of the global community in the implementation of the Sustainable Development Goals (SDGs). If the SDGs tell us anything, it is that we can't work on one sector without taking into account what is happening – either indirectly or directly – in relationship to what we are doing in other sectors. The planet operates as a system, and each part of that system is important in its own right, but also important in its impacts in other parts. Water is one of the parts of that system and we must think about solving water problems now and in the future in the context of that planetary system.”

GWP took part in the UN climate change negotiations in Katowice, Poland (COP24) in December. Bamsey has been following the climate change negotiations for many years, and he says that he was pleased with the result in Katowice: “I was relieved, because the system that was established in Paris continues: that new process to see an effective global response to climate change is still in place. For some time, it seemed like COP24 would set that process back, but it didn't. It wasn't a great victory, nothing to cheer about, but it's a good thing that we weren't set back. It means that the participation of all countries continues.”

One of GWP’s key activities at COP24 was the launch of an emerging insights report "Preparing to Adapt: The Untold Story of Water in Climate Change Adaptation" – which is an analysis of 80 Nationally Determined Contributions (NDCs).

“I think the paper that GWP brought to COP in Katowice underlines what maybe many of the negotiators forget, and that is that back home water is a central issue. The availability of an analysis to what governments had said in Paris was very instructive. Many were surprised by the evidence that when countries think about the impacts of climate change – what it means to them, where they're vulnerable, what they need to do in respond – water is so often the first line; it's the place where vulnerability is most evident. The paper underlined this centrality of water in the climate solution. My personal view was that GWP had identified the key issues very well.”

Another GWP key event at COP24 was a joint event with the World Meteorological Organization (WMO) that showcased shared experiences on climate rationale, and on developing climate resilient GCF projects and how to access support from GCF and others. This event was a continuation of a string of workshops that GWP has held in Africa and Asia on this topic. While Bamsey hasn’t attended any of the workshops personally, he says he’s heard good things about them.

“I have heard very positive reports about the workshops, how they helped countries - particularly those focused on water questions - to understand better what they had to do to access GCF resources. That was not only positive for the countries, but also for the GCF, because for them, a key challenge is finding the people who can use those resources most effectively and make available to them the knowledge for how to make their case for the allocation of these resources. This also highlights something that the GCF and GWP have in common – something very unusual among international organisations - and that is a real focus on country level activity; on finding ways to help countries make their own decisions about what needs to be done and what they want to be done, rather than be told by international experts what they should be doing.”

GWP – “an asset for the planet”

As we wrap up the interview with Mr. Bamsey, he reflects on his motivation to join the GWP network, and what makes it stand out.

“When I was thinking about GWP, people kept saying to me that the really outstanding asset that GWP has, is its network. When you say those words, you think about 3000 organisations around the world that are affiliated with GWP and that creates a certain impression. But as I thought about that further, a network is not just an object itself, it's an instrument. And what that network does, is make sure that in the countries concerned; in the communities concerned - the problems and the solutions are generated locally. They're organised around local people, are implemented by people locally, and the lessons learned locally are made available through the network so that others can benefit. That knowledge that is generated from this rather nebulous concept of a network, is made available through the work of GWP, and it brings solutions closer in other communities, countries, regions. That's an extraordinary asset for the globe, not just for GWP – it's an asset for the planet. I don't know of any other area of activity or group of people work together that are quite the same.”

In his own words 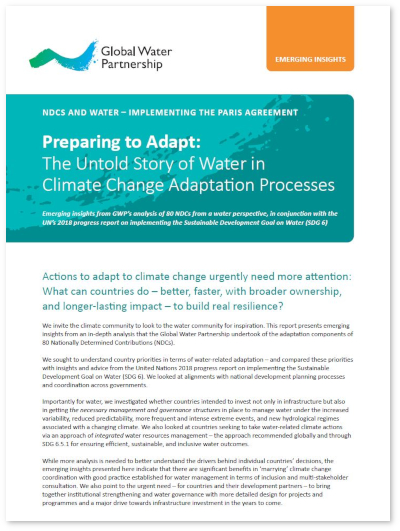