The webinar was attended by more than 60 participants from all over the world, while there were nearly 10 views and 5 shares on Facebook live. This was co-organised by Global Water Partnership Organisation (GWPO) and the Ministry of Foreign Affairs of the Government of Netherlands. 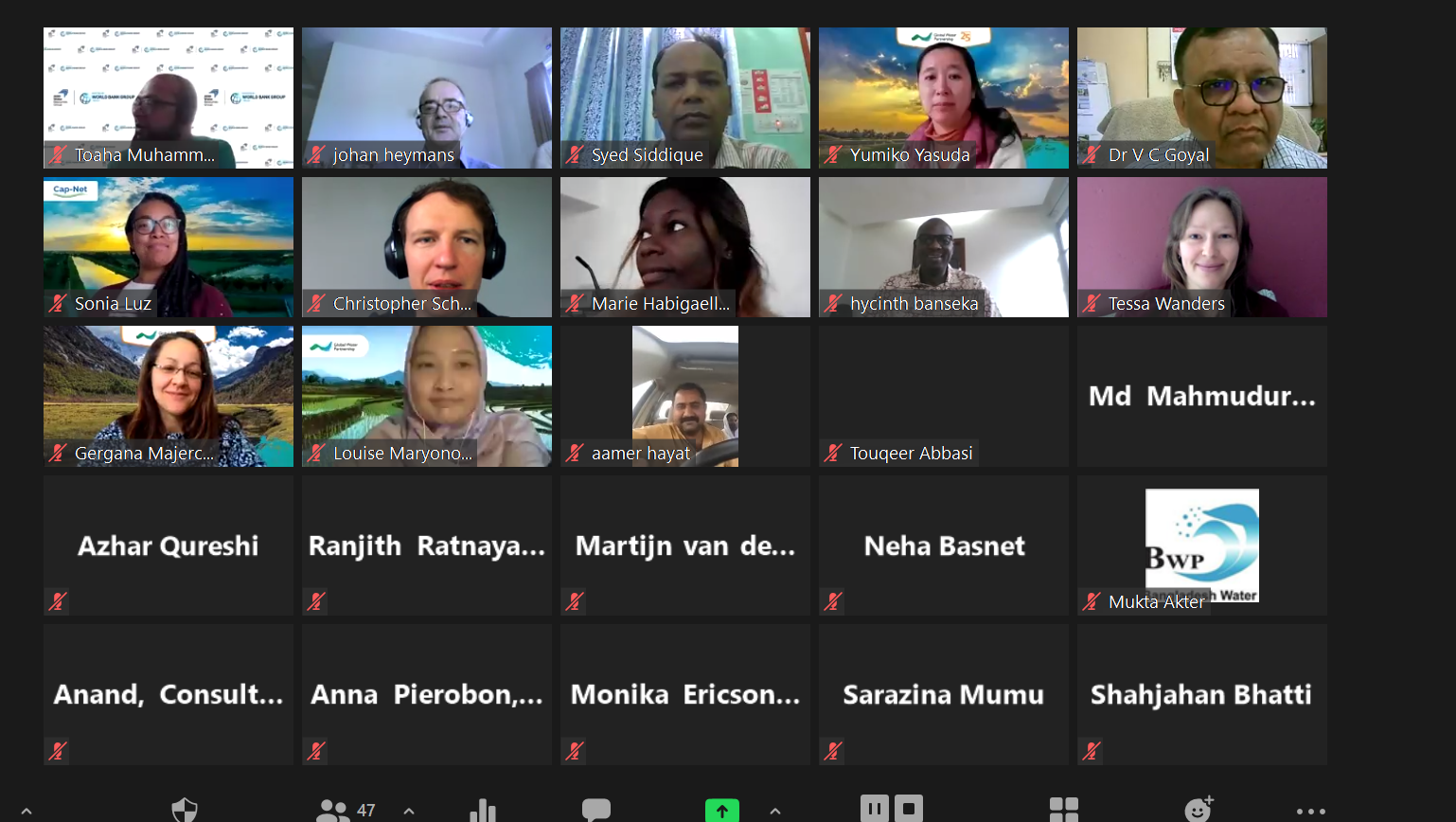 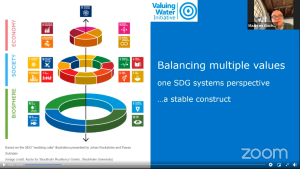 Maarten Gischler was the Key Note Speaker who is a Senior Water Adviser in the Netherlands Ministry of Foreign Affairs. He admitted that Valuing Water is a complex topic and informed that South Asia is a hot spot by referring the Aqueduct Water Assessment tool produced by Water Resources Institute. He stated that “water problem does not have a single fix and also the system dynamics tends to resist change. Therefore, a High Level Panel of Water (HLPW) was created in 2016 constitutes with 11 Heads of Governments including Bangladesh and the Netherlands to contemplate valuing water problems.” In the outcome document they have produced has highlighted that the society tends to value other things/SDG goals than water and therefore, a system change is vital to face the water challenges.

He further discussed the “wedding cake” illustration of SDGs produced by Johan Rockstrom and Pavan Sukhdev, which is more stable against the inverted version of the cake. In the first structure, SDGs 6,13,14,15 which represents the Biosphere are being placed at the bottom with highest diameter while the SDGs representing Society and Economy are placed on top of each other. He also discussed about one of the ongoing case studies being carried out by HLPW to identify the successes and failures in brining change to face water challenges, based on 15 cases lead by indifferent sectors (government, financial institutions, research institutions and industry). The results of the Case Study will be out soon and hopefully they would facilitate guiding valuing water in the future.

After Maarten’s key note on valuing water the flow was given to Dr Monowar Hossain from Bangladesh. He was the former Executive 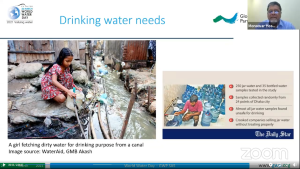 Director of the Institute of Water Modelling (IWM). Dr Hossain discussed about values in water in Bangladesh.

The first was the cultural value of water being a multi-cultural country and he explained the ways water being used for religious purpose. Also reminded the Political Value of water being a lower riparian country sharing Asia’s largest rivers i.e. Ganges, Brahmaputra and Meghna. He reminded the importance of valuing rights of the people in Bangladesh in sharing water of these transboundary rivers. Access to safe drinking water/potable water are is another challenge in Bangladesh. He emphasised that some companies have started selling bottled water that were being filled at the unsafe water sources which has become a public threat in the country. He brought the economic value of water as water need to rare livestock and for fishing, which is one of the major protein source of the country.  Being a densely populated country, with high level of pollution, Bangladesh immensely values their remaining eco systems. Therefore, water has an ecological value that contributes to maintain the eco systems. By bringing the social value of water he said still in some parts of Bangladesh people use boats for transportation and sand collected from the riverbeds are being used for infrastructure development. Water also plays a recreation value, also being a deltaic country the lives of the people in the riverbeds are being threatened by the floods generated due to siltation. 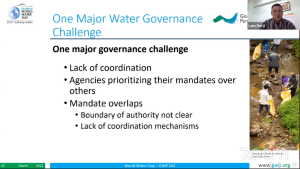 After the briefing on core values of water in Bangladesh, Dr Lam Dorji brought a case study on Bhutan to participant’s attention. He said lack of coordination among the sectors is a challenge, which is also common in other countries in valuing water. Everyone think the value that they attached to water is “the” value but are not willing to consider the value given by others and try to influence and proritise their mandate over others. Sometime this leads to mandate overlaps as the boundary of authority is not clear. In response, in 2011, Bhutan enacted its Water Policy; GWP Bhutan/Bhutan Water Partnership was closely interacted with the Royal Government to produce the policy document. The timely enactment of water act brought interim outcomes to the nation by providing a legal framework for agencies to cooperate and work together towards the common goal of Water Security. Now the country’s IWRM plan is in place with overall water resources management system with greater understanding of individual agency roles. The five dimensions of water security captures in the policy that includes, rural water security, urban water security, economic water security, environmental water security, and Climate Change and Disaster Resilience. 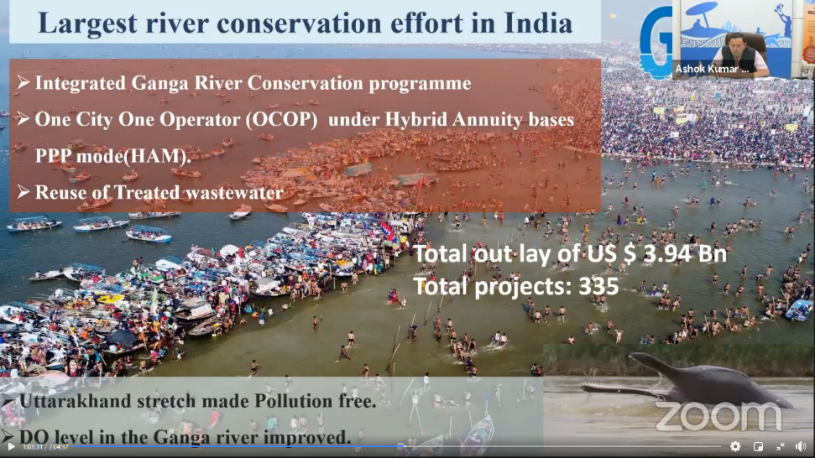 With Bhutan’s success story the floor was given to Mr Shri Asok Kumar Singh, Executive Director (Projects), National Mission for Clean Ganga (NMCG), Ministry of Jal Shakti, Government of India. Mr Kumar discussing the Indian approach for valuing water said, water related challenges i.e. melting glaciers and the snowfields in Himalayas, droughts and floods, reduced quality and quantity of groundwater and increased saline intrusion of aquifers have been aggravated by the deteriorating water quality due to growing population. In order to address the challenge lack of coordination the Government of India has taken a major reform by brining three ministries that looked after water issues into one as Ministry of Jal Shakthi, the Ministry of Water and Power. With the new approach, the ministry realised the need of having an integrated approach to conserve water resources in the country. It had launched several missions to achieve the goals that includes to have a comprehensive water database, promotion of state and citizen activation to conserve water, focused attention on vulnerable areas, increased water use efficiency by 20 percent and  promotion of IWRM at basin level.

Mr Kumar emphasised on the largest river conservation effort in India, which is the Namami Ganga Project (Integrated Ganga River Conservation programme) launched in 2015 with 335 projects and nearly USD 4 billion investment. He emphasised on two successful projects undertaken under the river conservation programme, which includes One City One Operator (OCOP) under Hybrid Annuity bases PPP mode (HAM) and Reuse of Treated wastewater. He proudly declared that now Ganges is one of the healthiest rivers in the world. By concluding his presentation Mr Kumar said, one of the main indicator for increased bio diversity in the river is observing dolphin population again in the river. 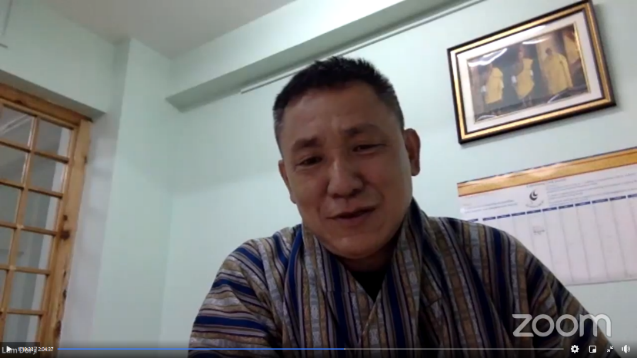 There were two questions directed to Dr Dorji during question and answer session.

Q1: Has Bhutan's experience with "Gross National Happiness" been applied to valuing water in the country? He informed that atleast 3 of the 4 pillars of GNH, environment conservation, equitable economic and social development and good governance are being applied in developing the National Water Policy.

Q2: Valuing water needs mutual trust. How to ensure that all countries openly share river discharge data of transboundary rivers? In Bhutan the National Environment Commission is the Apex body that collects all the updated data gathered at the different ministries and convert them into recommendations the ensure water secure Bhutan. Dr Hossain adding his perspectives to the discussion illustrated the importance of having a regional body to develop cooperation among nations for utilisation of the great transboundary rivers. The best example is the Mekong River Commission. 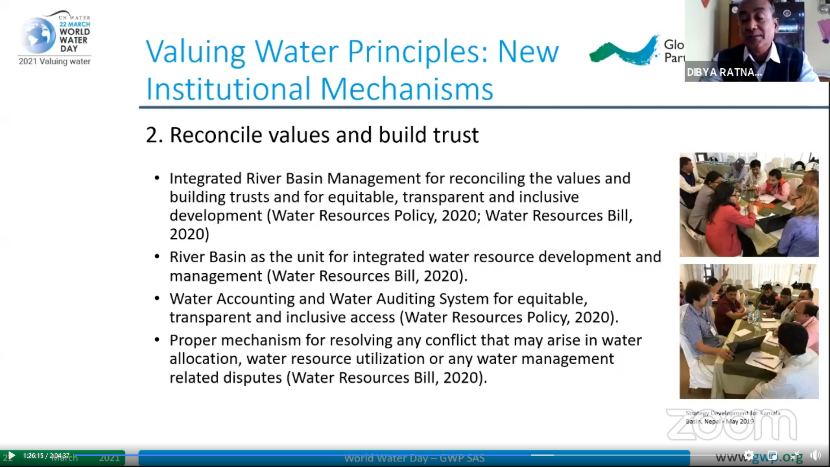 The next presenter was Dr Dibya Ratna Kansakar from Nepal. He is a renowned hydrologist and a Member of the GWP Nepal/JVS Executive Committee.

Dr Dibya highlighted the increasing competition over available water resources, deterioration of Aquatic Ecosystems and the destruction of the livelihoods that depends on them, utilitarian view on water resources and sectoral approach to water resources utilisation as challenges in water governance in Nepal. The Government of Nepal has initiated Institutional Mechanisms and enacted a Water Resources Policy in 2020 by prioritising the first three valuing water principles, recognise and embrace water’s multiple values, reconcile values and build trust and protect the sources. Some of the actions taken include, preparing Integrated River Basin Management Plans for all the nine major river basins in the country, preparing the hydropower Master Plan and completed the Irrigation Master Plan (in 2019) based on River Basin Management Plans. 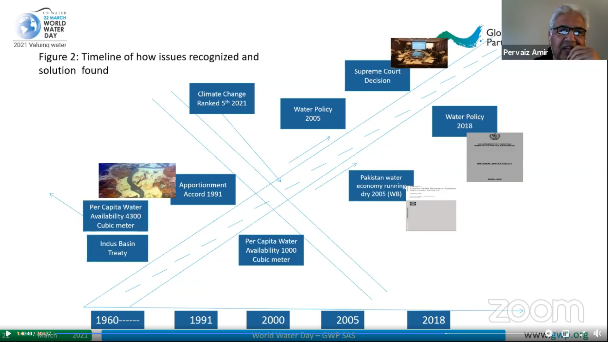 After the success story of Nepal the floor was given to Dr Pervaiz Amir who is an environmental economist having a keen interest on water sector and climate change. He informed that the major challenge Pakistan faces is the extremely limited water storage capacity in the country due deficit in major infrastructure. High poverty level (remains at 40 percent), striking demand for water due to increasing population and unsolved treaties signed on transboundary rivers have further exaggerate the situation. Therefore, the Government of Pakistan has taken several steps to influence water governance by signing Water Apportionment Accord (WAA) in 1991, to share waters of the Indus River between the four provinces of Pakistan, enacted a Water Policy in 2018. Also started constructing small-scale dams to enhance water storage and to generate hydropower in order to uplift the Socio-economic condition of the people. 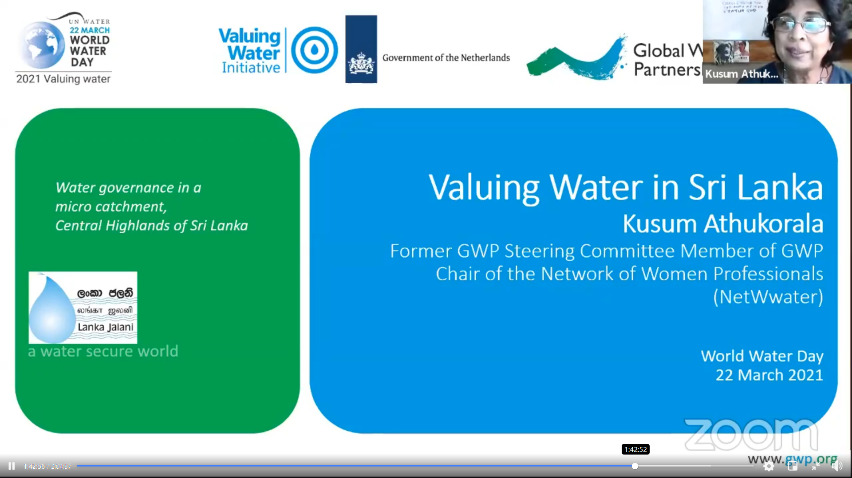 The last presenter of the webinar was Ms Kusum Athukorala from Sri Lanka, who is the Chair of Network of Women Professionals (NetWwater), and was the only female presenter of the event. Kusum informed that similarly to other countries in the region, Sri Lanka is also facing issues related to water governance i.e. silo thinking, lack of intra agency communication and obsolete policies or lack of specific water policy. Therefore, deforestation, sedimentation in reservoirs and lack of water for irrigation and hydro power generation have escalated as nation treats. Therefore, GWP Sri Lanka/Sri Lanka Water Partnership, which is the country chapter of GWP initiated a few steps to mitigate the arising problems by introducing rain water harvesting programmes as a mean of ground water recharge, community awareness programmes for catchment conservation and practicing citizens science approach using schools as catalysts. She also emphasised on the importance of involving women in all the steps of these projects.

Q3: How can we build political will to preserve water rights for urban poor living in informal settlements? Dr Pervaiz bringing the Pakistan experience suggested the importance of involving judicial systems in water governance.

Q4: Valuing water needs mutual trust. How to ensure that all countries openly share river discharge data of transboundary rivers? Water governance requires integrated mechanism, said Kusum. All the agencies working on water management should come to a common platform, should create mechanisms to share water in a gender and climate sensitive manner. 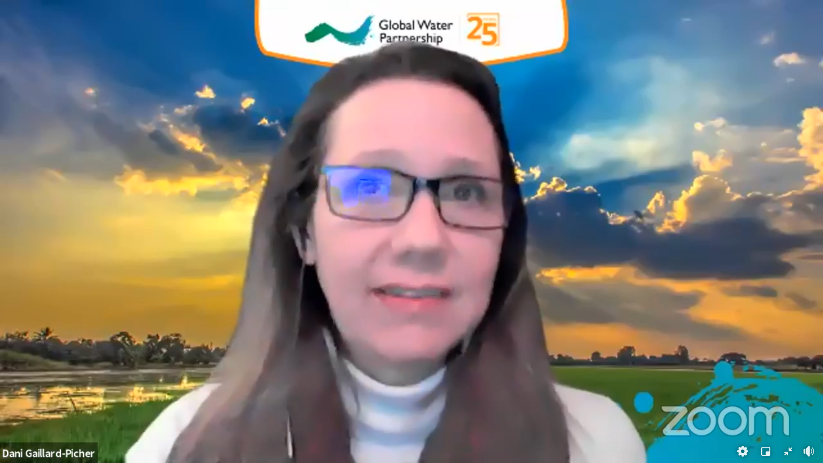 Although the webinar was slightly overrun we were able to maintain the interest of the participants until the closing of the session. Mr Lal Induruwage, Regional Coordinator, GWP South Asia thanked all the participants, presenters and the technical team for their attendance and contributions. There are several unanswered questions raised at the webinar will be addressed on the GWP South Asia social media accounts.