As a founding member of South Asia WWN, Ms Athukorala commenced the discussion and reminded how challenging it was for her and her associate, Dr Simi Kamal to secure female representation in the GWP Network; it was an era where the water sector was dominated by powerful men and there was a dearth of women water professionals in decision making fora. She recollected that throughout it has been difficult to mainstream gender at the decision-making level in the Steering Committees of these networks. She expressed us how grateful she is to see this gathering  after almost twenty years. She said “the main reason for inviting all these women experts to the meeting is to hear their insights and ideas to mobilise and empower women in the region. Later, these ideas can be developed into comprehensive concept notes to secure funding and building partnerships”. She further expressed that “this is the time for the Country Water Partnerships to focus on demand-driven gender-based activities rather than merely participating in activities that are being imposed by pressure groups”.

Dr Simi Kamal, who spoke next is currently serving as the Vice Chair of IWMI Board 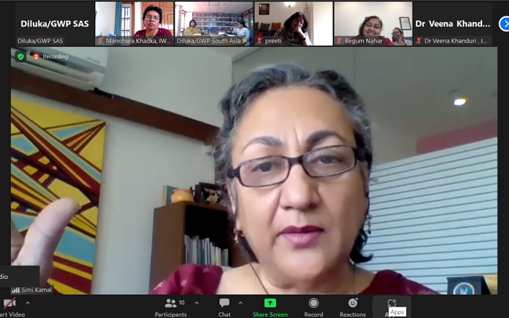 of Governors, the founder and the Chairperson of Hisaar Foundation and leads the Karachi Water Partnership in Pakistan. Recollecting the inception of WWN in 2002 she said, the network was active at the initial stage but only some of the countries managed to continue with the same spirit. She highlighted that the mistake that they made was trying to partner with water organisations that are dominated by men, instead of linking up with women’s organisations. Dr Kamal concluding her remarks  by bringing WWN Pakistan as an example said recommended that “it is advisable to maintain South Asia WWN as a women’s only network in order to safeguard our network”. 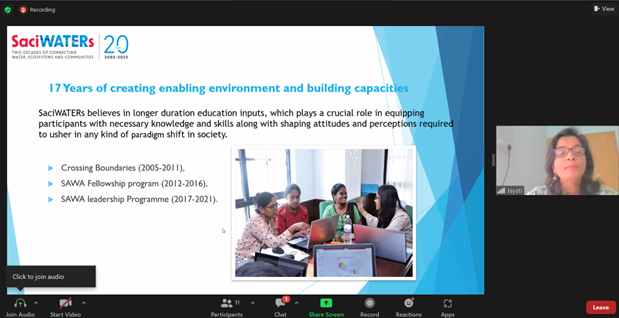 The second speaker was Dr Jayati Chourey, Executive Director of SaciWATERs who spoke about engendering water and climate change science education in South Asia through SaciWATERs. She discussed the 17 years of experience of capacity building for women water professionals of the organisation and stated that they ensure to maintain gender-inclusive approach in their programmes. 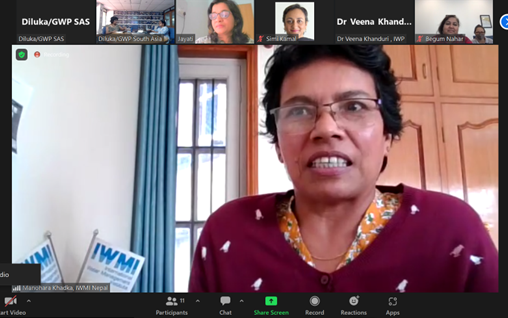 The third speaker was Dr Manohara Khadka, Country Representative, IWMI Nepal who explained the prominent but neglected gap in water resources management as follows “although the South Asian women play a key role in water resources management, they are not being involved in decision making at any level which makes them more vulnerable in terms of water scarcity and to water-related disasters”. She highlighted three challenges she observed concerning gender mainstreaming within the water sector. Firstly, the research on gender is proceeding very slowly. The need of reframing the research agenda and addressing gender both at the micro and macro levels in the water sector was the second issue she highlighted while using innovation and technology to empower rural women and enable female entrepreneurship was the third. She further expressed that the project leads of renowned research institutes should encourage young scientists to join and actively engage in gender-related research if the issue is to be addressed meaningfully.

Following those guest speeches, the floor was opened for discussion where the participants representing the countries further discussed the need for a 21st century agenda, capacity building of women, the need of going beyond household studies, the importance of crossing disciplinary boundaries and having dedicated projects to empower women. Ultimately, it was decided to ensure documentation of good practices at the country level. The participants agreed to develop concept notes based on the in-country demands by incorporating potential partners and funding avenues, bring them to the attention of the regional and country-level steering committees and influence the decision-makers to implement such projects. Most importantly, all voted to develop a “group of South Asian women” that would function as a supporting mechanism to women water professionals,  water women’s  groups and young women water professionals.