On 29 October 2014 the Government of the Republic of Uzbekistan organized an international conference “Development of Cooperation in the Aral Sea Basin to Mitigate Consequences of the Environmental Catastrophe” in Urgench, Uzbekistan.

The main purpose of the meeting was to discuss the situation in the Aral Sea Basin and mobilize the efforts of international community to carry out practical actions in implementing programs and projects aimed at improving the environmental and socio-economic situation in the Aral Sea Basin, as well as ensuring further development of international cooperation to reduce the negative consequences of this global environmental catastrophe.

GWP CACENA was invited to contribute to the session 1: "Improvement of the management system, economical and efficient use of water resources in the Aral Sea Basin". GWP CACENA was represented by Mrs. Nino Chkhobadze, Chair and Dr. Vadim Sokolov, Regional Coordinator.
The general direction of the discussions emphasized the need for special attention to current and future problems of water resources in the Aral Sea and to the issues of their rational and efficient use. Priority issues outlined are: the safety of hydraulic structures, many of which are subject to the aging process, resulting in more than 40-50 years of their operation; introduction of water saving technologies in all water uses; improving land and water productivity.

Participants stressed necessity to focus on the relevant projects of the ASBP-3, which

are designed to provide reliable and secured operation of hydraulic structures for the long term, the effectiveness of measures to protect against natural disasters, stable water supply to water users, and a general well-being and development of the Central Asian region.

Concrete proposals were delivered by GWP CACENA Chair, Mrs. Nino Chkhobadze in her presentation on promising ways of increasing the efficiency and the rational use of water resources. First of all, the introduction of IWRM as a tool for multi-sectoral water security was underlined, and application possibilities of advanced knowledge in the field of water management and water-saving technologies, the development of monitoring for snow and glaciers resources, including the improvement of the system of water and water quality management. It is appropriate to organize continuous monitoring of the Aral Sea, which will effectively analyze and evaluate the real situation with environmental changes and the consequences for taking consistent action to stabilize the environmental and socio-economic situation in the Aral Sea area.

Priority was noted by First deputy Minister of Energy and Water Resources of Tajikistan, Mr. Sulton Rakhimzoda for further improvement and development of a regional information system for water management. It is known that the exchange of information is a basic instrument for cooperation among the riparian countries, without which it is impossible to achieve the efficient and sustainable management of water resources.

The Acting Chair of the Executive Committee of the IFAS, Mr. Shavkat Khamraev in his concluding speech noted: “We are grateful to a number of the most active partners, such as the German Agency for Cooperation, Swiss Agency for Development Cooperation, United Nations Development Programme, the Asian Development Bank and the Global Water Partnership - for their invaluable contribution to improving the management of water resources at the national and regional levels”. 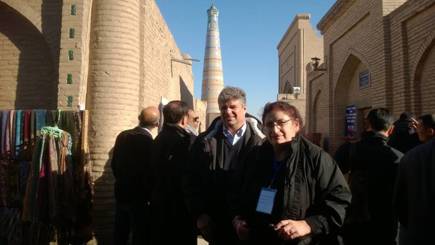 Sightseeing tour to the ancient city of Khiva, Nino and Vadim