VIENNA, 10 October - A secondary school in Bosnia and Herzegovina has won the ‘International Danube Art Master 2017’ competition, announced Susanne Brandstetter, Chairperson of the Public Participation Expert Group of the International Commission for the Protection of the Danube River (ICPDR). Ms. Brandstetter made the announcement yesterday at the House of the European Union in Vienna.

The winning submission “Bridge – rivers connect people and bridges connect their riversides” - was created by pupils from the Sixth Basic School, Ilidža, in Sarajevo. The creative, artistic work of art made out of used plastic bottles and plastic waste forms a bridge depicting the joint goal of children building bridges that will connect with others towards a cleaner Danube, free of plastics.

The International Master is selected from the winners of the national ‘Danube Art Master’ competitions in 12 Danube Basin countries including Austria, Bosnia and Herzegovina, Bulgaria, Croatia, Germany, Hungary, Moldova, Romania, Serbia, Slovakia, Slovenia and Ukraine. All children and schools from these 12 countries were invited to apply. While around 2000 children participated, only about 280 artworks were submitted since most contestants were working in larger teams.

The “International Danube Art Master 2017” competition was announced on Danube Day on 29 June, 2017. The competition was linked to the event’s central theme – “Get Active for a Cleaner Danube” – to build on one of the three pillars of the Danube Declaration 2016, towards cleaner, healthier and safer waters for everyone to enjoy.
Children were encouraged to visit local rivers and surrounding environments and to think about their importance and connections. They were then asked to reflect their thoughts and inspirations through environmental art using materials from in and around the river. Other examples of prize-winning submissions at the national level included Hungary’s ‘Give me a hand!’ made from sand, glass debris and plastic waste showing a hand reaching out of the waste. The work was created by Gréta Melinda Gats, a pupil at the Szombathelyi Szombathely Arts High School in Szombathely.

The third prize went to Croatia with Eco Patrol, by a group of pupils from OŠ Drenje, PO Slatinik in Drenje. 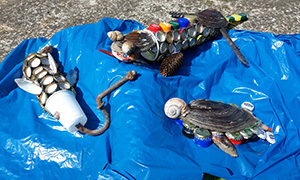 The competition was jointly organized by the ICPDR and the Global Water Partnership Central and Eastern Europe (GWP CEE), an ICPDR observer organisation and one of the largest networks focusing on water in the world.
“We believe that this competition encourages children and teenagers to learn more about the Danube and help protect it,” said ICPDR Executive Secretary Ivan Zavadsky about the competition. “It is also an artistic reminder for adults and the representatives of Danube national governments of their joint responsibility to ensure that the Danube is protected for future generations.”

An award ceremony will be held in Vienna during the ICPDR Ordinary Meeting in December in Vienna.