Through the implementation of its strategy, GWP supports water security and the achievement of the Sustainable Development Goals (SDGs) via strengthened governance and management of water resources. This is pursued by promoting Integrated Water Resources Management, a cross-sectoral approach, designed to replace the traditional, fragmented sectoral approach that has led to poor services and unsustainable resource use.

The work is structured according to the following chain of results.

Some of these influenced actors are instrumental in the development of key water governance outcomes. A new water policy, a national adaptation plan, a transboundary management agreement, an investment plan or strategy, strengthened legislation, a regional planning framework, and institutional reform are examples of such outcomes.

Ultimately, the implementation of these water governance outcomes leads to socioeconomic benefits among the target populations through, for example, increased investment in appropriate infrastructure, empowerment of vulnerable groups, and more sustainable use of resources.

To achieve such outcome- and impact-level results, GWP works with stakeholders around three strategic goals, as outlined in the GWP Strategy 2014–2019:

Simply put, a strong network (Goal 3) reinforces knowledge sharing and communications (Goal 2), which in turn enables the facilitation of specific water governance processes (Goal 1). It is according to this logic that GWP plans and implements its work. 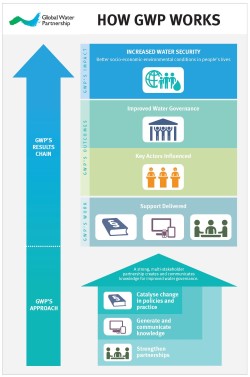 GWP in the News - highlights