Publication Launched-Empowering Women in Water Diplomacy in the Middle East and North Africa: A Comparative Study of Egypt, Jordan, Lebanon, Morocco and Palestine

On 15 March 2021, during a virtual event attended by almost 200 participants, the Publication on Empowering Women in Water Diplomacy in the Middle East and North Africa: A Comparative Study of Egypt, Jordan, Lebanon, Morocco and Palestine was formally launched. The Study, produced in the frame of the joint GWP-Med and Geneva Water Hub initiative, pinpoints challenges facing women in water diplomacy in five MENA countries and identifies capacity building needs.

The launching date was chosen to mark a symbolic bridge between the celebrations of International Women’s Day on March 8th, and World Water Day on March 22nd, on the one hand emphasising that “Valuing Water” (the 2021 theme for World Water Day) cannot be fully achieved without taking into consideration the value of water to women, while on the other hand focusing on how to promote the role of “Women in Leadership: Achieving an equal future in a COVID-19 world” (2021 International Women’s Day theme).

The virtual launching event celebrated the successful completion of analytical work on the current status and challenges facing women in water diplomacy and transboundary water cooperation setting in five countries across the Middle East and North Africa region.

This mapping work, capitalising on the methodology used for a similar mapping exercise undertaken in 2017 in Jordan, Lebanon and Palestine, reviewed and updated the work in the three countries and expanded the mapping to the Maghreb sub-region by including the cases of Egypt and Morocco. Based on the findings, it identified the capacity building needs in terms of the various skills of a 21st century water diplomat.

Co-organised by GWP-Med and the Geneva Water Hub, within the framework of the Union for the Mediterranean (UfM) Water Policy Framework for Actions 2030, the virtual launching event commenced with welcoming remarks on behalf of the institutional partners. Prof. Michael Scoullos, Chairperson, GWP-Med, Mr. François Münger, Director, Geneva Water Hub and Mr. Isidro González Afonso, Deputy Secretary General for Water, Environment and Blue Economy, Union for the Mediterranean (UfM) Secretariat, highlighted the value and vulnerability of water resources, also in view of climate change impacts, the contribution of hydrodiplomacy in building bridges across the diversity of the Mediterranean mosaic and the critical role of women in this process. The three speakers re-confirmed the commitment and dedication of their respective institutions to supporting the role of women in water diplomacy. 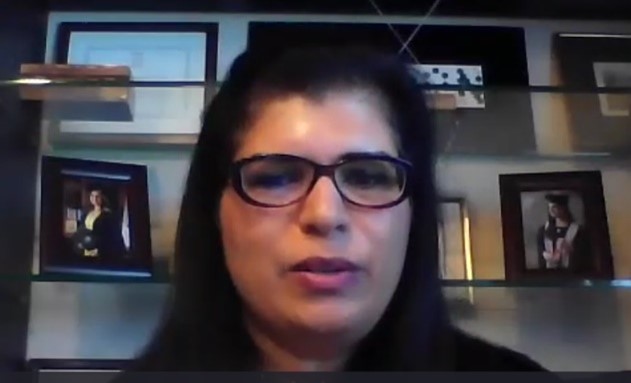 HRH Princess Sumaya bint El Hassan stressed the timeliness of discussing the role and potential of women in water diplomacy and water-related peace building and engagement and acknowledged the important contribution of the Comparative Study for recognising challenges, identifying opportunities and providing the space for women to lead.

Immediately afterwards, and in an effort reminiscent of a physical book launch, the electronic publication of the Comparative Study was shared with all participants, while its key findings were briefly presented by the Study’s six co-authors, Eng. Charafat Afailal, Ms. Mey Al Sayegh, Dr. Anthi Brouma, Eng. Natasha Carmi, Dr. Tahani Moustafa Sileet and Ms. Maysoon Zoubi. It was highlighted that the Comparative Study represents the tangible output of the collaboration, initiated at the beginning of 2020, between the Global Water Partnership – Mediterranean (GWP-Med) and the Geneva Water Hub, aiming to strengthen the role of women in water diplomacy in the region. Its preparation was financially supported by the Swedish International Development Cooperation Agency (Sida) in the framework of the “Making Water Cooperation happen in the Mediterranean” Project, aka Water Matchmaker Project, and the Swiss Agency for Development and Cooperation (SDC). Finally, the co-authors shared the main components of the next steps, especially as the analytical work has evolved into an Initiative aiming to support and strengthen the role of women involved in water diplomacy in the MENA region.

The last segment of the virtual launching event concerned an interactive panel exchange with targeted development partners and institutions on how to promote a gender transformative MENA. The esteemed speakers,

were asked to reflect on the findings of the Comparative Study and identify areas of potential operational synergies with their respective lines of work.

The 2-hour event (13:00-15:00 CET), that had simultaneous interpretation in English/French/Arabic, concluded with short closing remarks by the institutional partners on the operational level of the next steps. It was reaffirmed that the Initiative that has been born out of the analytical work, is committed to actively work for making a change and transform the informal network of MENA women that was created as a result of the Comparative Study’s work, into a Community of Practice working on Gender and Water Diplomacy in the region in order to contribute to the promotion of the role of women in water diplomacy.

Watch a short introduction to the Women in Water Diplomacy Initiative.