The Programme,  (AIP-WACDEP-G) (2020-2022) is being implemented by Global Water Partnership Mediterranean (GWP-Med) in Tunisia under the leadership of the Tunisian Ministry of Agriculture, Water Resources and Fisheries (MARHP).

The effects of water insecurity are gendered because of variations in social roles and asset access between men and women. Aiming to tackle these effects, the AIP WACDEP-G initiative is promoting a gender transformative approach (GTA) to address the imbalances. GTA strives to change existing power dynamics and institutional arrangements that perpetuate gendered inequities by observing norms, attitudes, and underlying social systems. It tries to address the underlying causes of gender inequality, while also reshaping unequal power relations. Gender disparities in access to productive assets and resources are frequently connected to access to water, and women and girls bear a disproportionate amount of the burden from the impacts of climate change.

In Tunisia, women are benefiting from increased emancipation under the Code of Personal Status, including through greater access to education and professional sectors. Despite this progress, gender-based vulnerabilities persist. Women endure many challenges to their well-being including limited economic opportunities, mainly confined to the agricultural and informal sectors; limited mobility due to poor infrastructure and threats to personal safety; cultural practices that reinforce their reliance on their parents and men; and, environmental risks related to climate change, water scarcity, floods, and drought.

According to the Global Gender Gap report 2020, the World Economic Forum's publication on gender inequality, Tunisia's ranking in terms of gender equality dropped from 90th to 124th out of a total of 153 countries between 2006 and 2020[1]. In addition, Tunisia ranked 126th out of 156 nations in the global gender gap index in 2021, with a score of 0.65[2]. Only 42.3 percent of female adults’ complete secondary education, compared to 54.6 percent of male people. In addition, female labor market engagement is substantially lower than male (24.1 percent vs. 69.9 percent), which is also reflected in the proportion of parliamentary seats (31.3 percent of female and 68.7 percent of male).

Tunisia has made progress towards becoming a more gender equal society—as evidenced in an array of policies that have successfully integrated gender[3]. However, several water and climate policies remain gender blind or gender neutral at best. The failure to incorporate gender into these policies, coupled with generalisations about equality that have no concrete method of application, can limit efforts toward gender equality in Tunisia. Consequently, examining and amending policies using gender transformative approaches is vital for ensuring equitable responses to climate change and water insecurity in Tunisia.

By addressing the needs of women and vulnerable people, Tunisia is achieving progress toward the Sustainable Development Goals' guiding principle of "Leaving no one behind". However, attempts to achieve gender equality must be bolstered. Gender transition is a bottom-up process that requires the participation of all relevant stakeholders. To this end, the AIP WACDEP-G programme aspires to actively engage public sector policy and decision-makers in its implementation through an inclusive multi-stakeholder approach. In this context, a working group composed by representatives from public institutions of water, environment/climate and gender, has been formed with the support of AIP WACDEP-G’s national focal point in Tunisia. 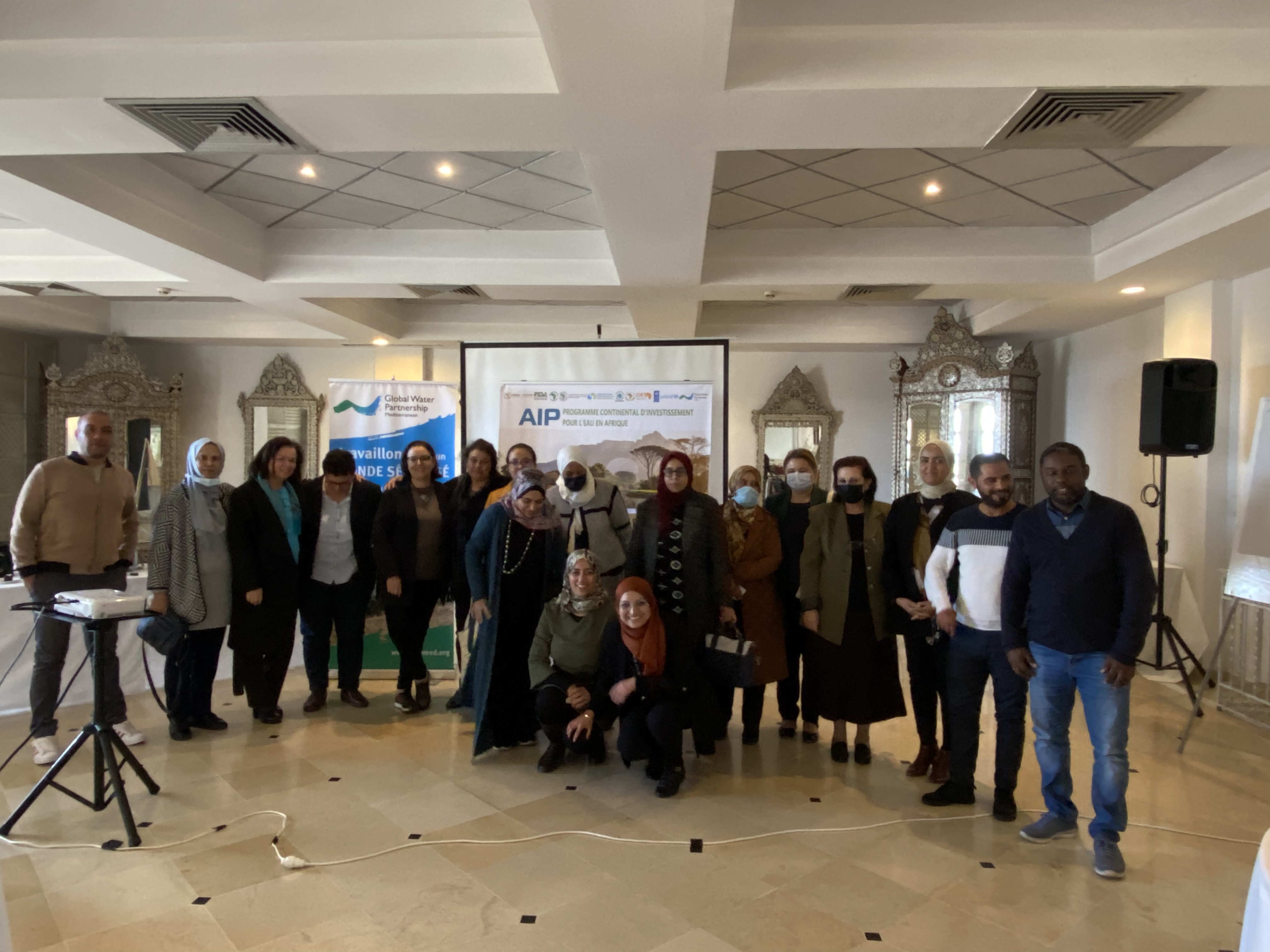 Meeting of the Working Group in November 2021

Below are some insights from members of this working group that offer an overview of the entry points and impact tactics that drive individual, institutional, and organisational change.

In this sense, Ms. Narjis Hamrouni, director of the Rural Women's Support Office (BAFR)[4] and being part of the project’s working group stipulates that “Women's empowerment is inextricably linked to climate resilience. Climate change's consequences in rural areas disproportionately affect the most vulnerable groups, particularly women, who really need to provide water and have to travel greater distances to bring water which is an extremely scarce resource due to climate change. Gender should be highly considered in climate policies and programs in order to make opportunities for women and marginalized groups to be part of the decision-making processes and contribute to the development of a gender-transformative institution for climate-resilient water investments, which is the goal of the AIP WACDEP-G!” 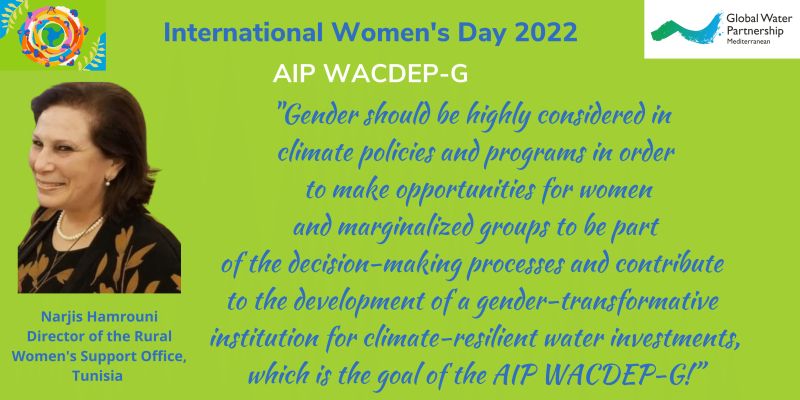 Ms. Aida Jridi, representing the General Directorate of Rural Engineering and Water Exploitation (DGGREE)[5],explains that “Women in rural regions are considered the most sensitive to the effects of climate change in terms of water, sanitation, and hygiene, due to their duties within households, their economic and social condition, and especially their low degree of contribution to decision-making. These women, on the other hand, are crucial players in driving ambitious climate action”. Ms. Aida Jridi was involved and implicated throughout the implementation of AIP WACDEP-G and she believes that “the adopted approach, which emphasizes the relevance of women's roles in policy making, implementation, and monitoring and evaluation at all levels (national, regional, and local), is a strong feature of the project and a major concern for the country.” 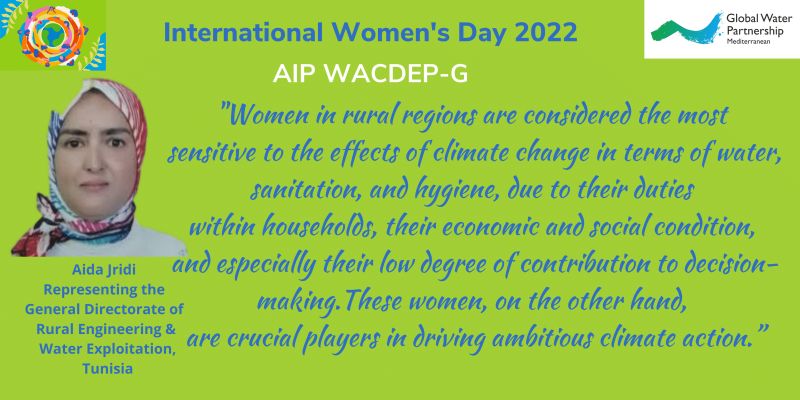 Ms. Sana Smida, representing the General Directorate for the Financing of Investments and Professional Bodies (DGFIOP)[6], commented that” Women are the primary actors when it comes to water and climate change issues. Women's empowerment in the control of water resources, on the one hand, and in lessening the impact of climate change, on the other hand, is dependent on reducing gender inequalities. And being part of the AIP-WACDEP programme is an opportunity to improve my capacities to apply a transformative gender approach to design climate-resilient water projects.” 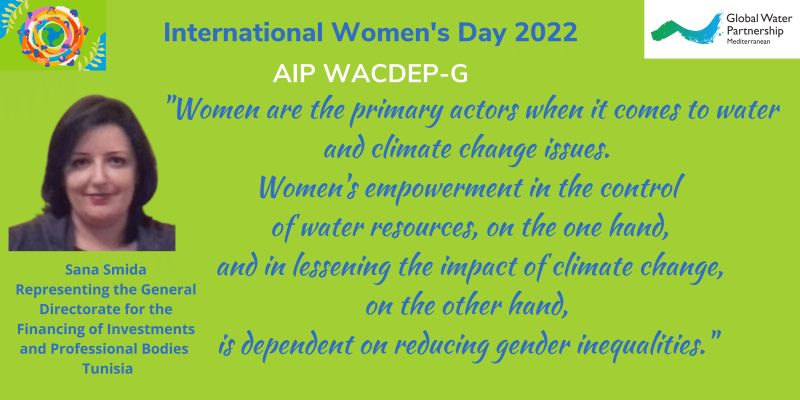 As director of management of the hydraulic sector in the office of planning and hydraulic balances (BPEH), Mr. Abderrahman Ouasli, noted that “As a result of climate change, natural resources, especially water resources, are impacted quantitatively and qualitatively. This susceptibility is likely to be exacerbated at the level of disadvantaged regions and the most vulnerable groups, such as women and children. Considering gender in any policy for adapting water resources to climate change only strengthens women's resilience and empowerment in the face of climate change's effects, especially in terms of preserving and sustaining sources of income and water-consuming activities. He added that the WACDEP-G project offers a new perspective based on a systemic and gender transformative approach, within the context of the "Gender - Water - Climate Change" Nexus. As a result, aims to promote a gender transformative strategy in order to accelerate investments in the water and climate sector as a method of tackling gender inequalities at the local, national, and regional levels. These initiatives will have a major positive impact on climate-affected vulnerable communities.” 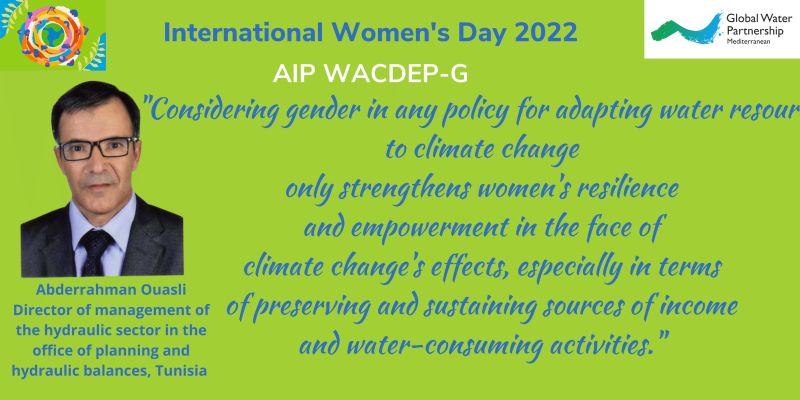 AIP WACDEP-G upcoming interventions, and until the completion of the current phase of work, include the design and implementation of a compelling and locally grounded gender-transformative pilot project, that will engage the principles embedded within Integrated Water Resources Management with the goal of improving the access to water investments, infrastructure, information, and control of resources and addressing practical needs and climate-induced vulnerabilities of marginalised groups. At the same time, the project will intensify and complete the technical and policy-related work as well as the capacitation at national level, assisting with the design of a vision and an agreement on the needed reforms for achieving Gender Equality through Climate Resilient Development of Water Infrastructure Investments.

The AIP WACDEP-G support program constitutes the continuity of the WACDEP program (2012-2019) which had Tunisia and the North Western Sahara Aquifer System among the beneficiary countries and basins. It builds on the findings of WACDEP, while placing emphasis on the gender dimension, aiming to ensure that the preparation, development, design, governance, and management of ongoing and new climate resilient water infrastructure investments, institutions, and job creation interventions strategically advance gender equality. The overall objective is to transform gender inequalities at scale by promoting gender-transformative planning, decision-making, and institutional development for climate resilient water investments in Africa. AIP WACDEP-G is implemented under the leadership of the General Directorate of Water Resources, Ministry of Agriculture, Hydraulic Resources and Fisheries, Republic of Tunisia, while the first three years of implementation (2020-2022) are supported financially by the Austrian Development Agency (ADA).