In Albania, women’s progress in politics needs to be reflected equally in all development areas

Albania has made significant improvements in advancing the normative framework for gender equality in recent years and in some areas progress is evident. However, along the water-energy-food-ecosystems Nexus and with respect to climate change impacts, which disproportionately affect women and the rural poor, references to gender are lacking.

Albania: A country that has significantly improved gender equality in politics

Albania has made significant improvements in advancing the normative framework for gender equality in recent years and in some areas progress is evident. Several international commitments are presented in the national policies and strategies and some of them have been well implemented. However, along the water-energy-food-ecosystems Nexus and with respect to climate change impacts, which disproportionately affect women and the rural poor, references to gender are lacking. Due to focus and selected investments in some areas rather than others, Albania has progressed in some areas more than others. But for a sustainable, inclusive, and prosperous society, progress needs to be even in all key development areas.

Albania has shown progress in the Global Gender Gap Index of the World Economic Forum (WEF) by being ranked the 25th among 156 countries, as per the 2021 report . Similarly, it scores relatively high in the first and only reference report so far on EU’s Gender Equality Index (GEI) with 60.4 out of 100 points, which is seven points below the EU-27 average. 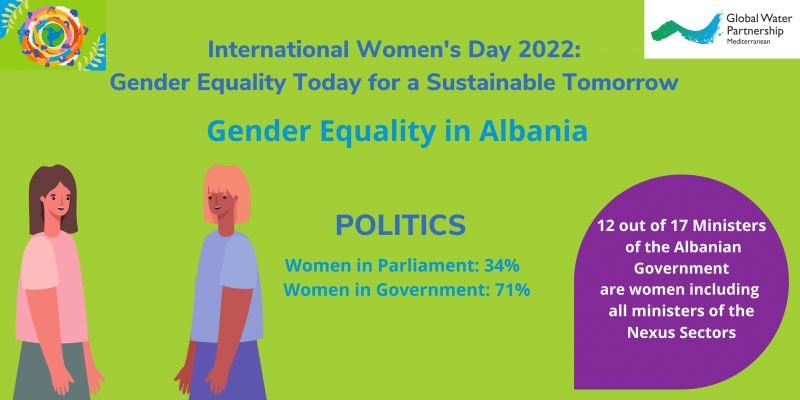 This is a significant improvement compared to previous years, especially if we refer to the first year when the WEF started to measure gender gap (see Table 1 below). As per these data, while there is some progress or even regress in the measured categories, the main area that has particularly contributed to Albania’s distinct progress in gender equality is primarily women’s increased formal representation in political decision-making.

As of today, women hold 12 ministerial posts out of 17 (including Ministers of State and PM) with 71% female ministers, thus ranking Albania at the top of the countries with female representation in ministerial positions. Women in parliament hold 34% of seats with 47 out of 140 Members of the Parliament, and at the local level women are also represented at the rates of 13,1 % women as Mayors and 43,6 % women as Councilors. This is a significant improvement taking into account that just 8 years ago, the percentage of women mayors didn’t surpass 2% and women councilors 12%. 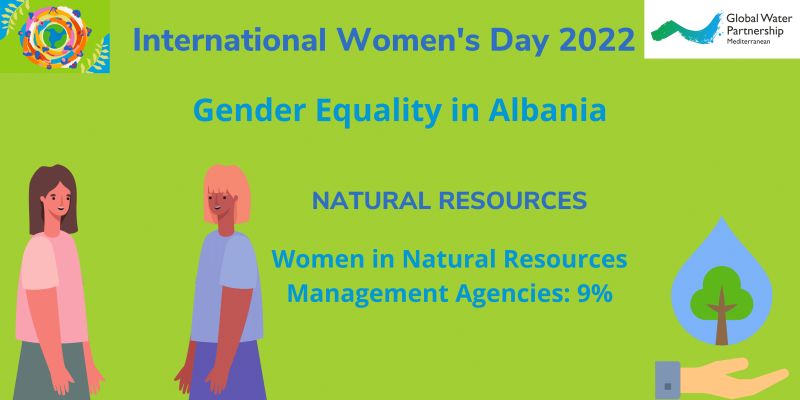 But what about other key development areas?

The above impressive figures are not however matched by equality scores in all other GAP sub-indices such as Economic Empowerment and Opportunity, Educational Attainment and Health and Survival gaps as shown in the table below. As per the Global Gender Gap Index (GGGI) of the World Economic Forum (WEF), the most distinct gap between women and men equality is in the Area of Health and Survival where actually there has been regress over years. The other two categories such as economic participation and opportunity and educational attainment have marked progress.

The Nexus sectors: Gender mainstreaming has not yet been integrated into the Water-Energy-Food-Ecosystem sectors

While Nexus sectors cover very critical development areas, some of them have yet little to no focus on gender equality. Many of the strategies in the sectors of water, energy, agriculture and environment have been prepared already for more than five years with the majority of them finishing by 2030. This year is also the Agenda 2030 deadline to combat inequalities and promote gender equality and the empowerment of women and girls; and to ensure the lasting protection of the planet and its natural resources amongst other objectives. 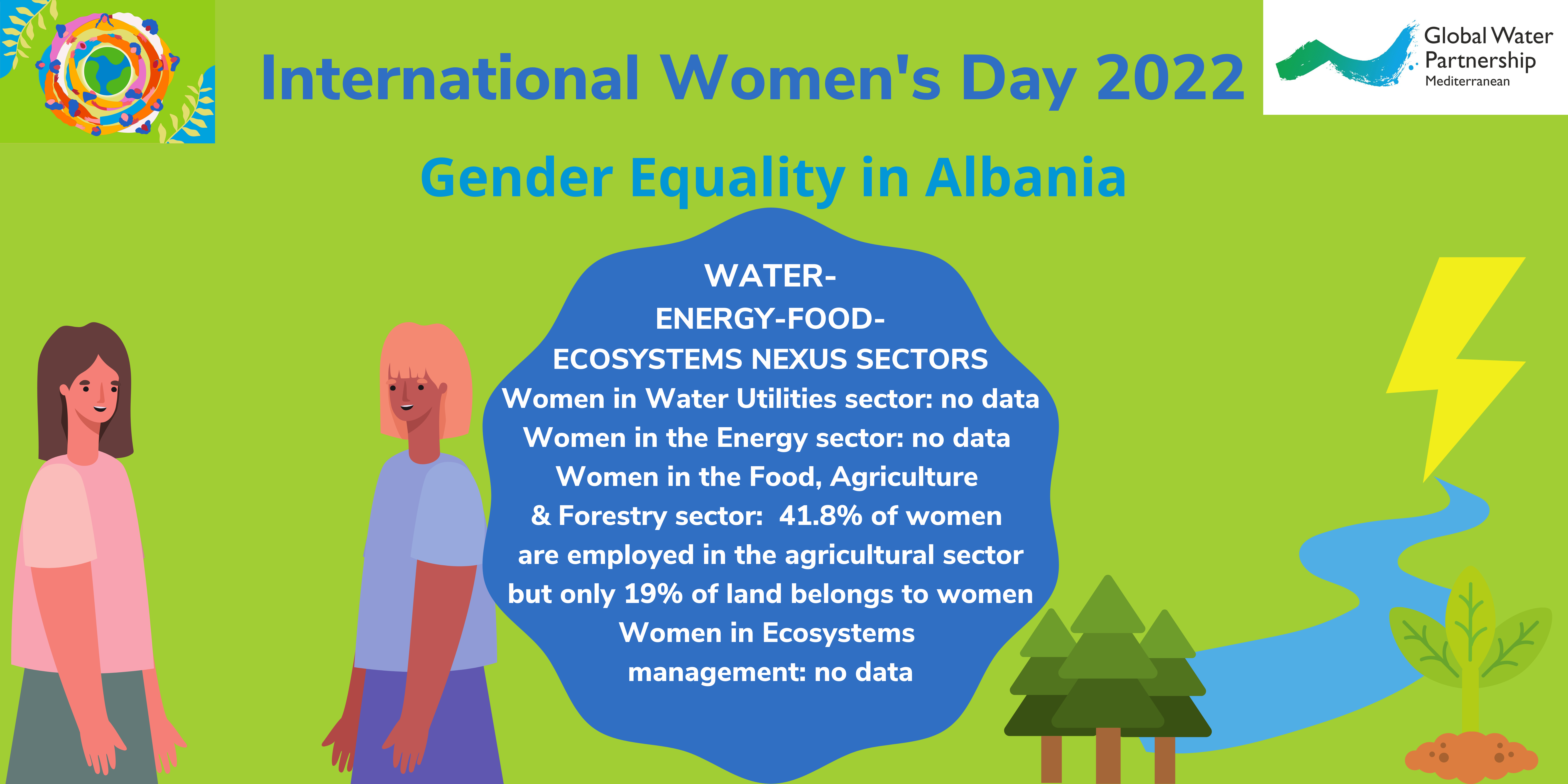 Few of these national strategies have made efforts to include gender perspective and address gender issues, and are still far from having a mainstreaming or transformative approach integrated and budgeted. This is the case even with the National Strategy on Gender Equality 2021-2030 that has only recently referred to nexus sectors for the first time: “…the work and information in these areas is still at very preliminary phases, because mainstreaming gender in these sectors is yet very difficult and challenging” noted Mrs. Brunilda Dervishaj, the Director of the Sector of Policies and Strategies for Gender Equality and Social Inclusion in the Ministry of Health and Social Protection.

Similarly, female participation in these sectors is extremely low. While women and girls have the highest participation in tertiary education they have lower employment rates compared to men  and also low participation in nexus sectors. As per the World Economic Forum, under education and skills for Agriculture, Forestry, Fisheries & Veterinary, the highest grade completed within the most advanced level attended, is 2.91 % for women compared to men with 5.90%. While there are no data specific to the nexus sectors because the levels are quite low, data from INSTAT shows that women have very low work participation in some of these sectors. The only exception is agriculture as the primary sector for women employment with 41.4% compared to 31.8% men.

Having women ministers leading all nexus sector in Albania is a great achievement; this does not necessarily guarantee that gender equality in these sector or other areas is achieved. If strategies and policies are not gender mainstreamed, if action plans do not address the different needs of women and men and if they are not properly budgeted in a gender responsive way, then it is a challenge for these sectors to address inequalities and discrimination. That is why future interventions need to carefully provide the relevant attention to gender equality and women empowerment to address the critical gap in these sectors. Lack of equality and uneven progress between women and men in the different areas of a political economy, will most certainly impact the country’s development outcomes and prosperity overall.