In the Drin basin, advancing gender equality in the context of climate crisis and disaster risk reduction is one of the biggest challenges and lack of equal representation persists in both national and local level in almost all Riparians.

On 8th of March 2022, the world celebrated the International Women’s Day (IWD) under the theme #GenderEqualityTodayforaSustainableTomorrow. International Women’s Day is a day to recognise achievements, spread awareness and strengthen commitments to creating more inclusive societies, but also an opportunity to call out gender inequalities and take action. While it will be celebrated amidst health and environmental crises, and conflict situations, it will specifically recognize the contribution of women and girls around the world, who are leading the climate change adaptation, mitigation, and response, to build a more sustainable future for all.

Advancing gender equality in the context of climate crisis and disaster risk reduction is one of the greatest global challenges of the 21st century. This is also the case in Southeastern Europe and specifically the Drin Basin[1] . While countries still struggle to recover from the pandemic, it is more important than ever to address Gender through an innovative approach like the Water-Food-Energy-Ecosystems Nexus in order to achieve Sustainable Development Goal 5 (Gender Equality) and deliver on the overall objectives of Agenda 2030. This is because Nexus aims at reconciling the interests of all different sectors, while respecting environmental needs and human rights. The Nexus approach moves beyond traditional sectoral thinking to achieve overall security and sustainability of all natural resources.

Yet, gender mainstreaming in nexus sectors policies remains limited due to lack of disaggregated data, unequal representation and access to decision making, as well as the constantly evolving nature of environmental challenges. But “Gender mainstreaming remains the principal tool for achieving gender equality… and contributes for redistributing power and influence and creating equal opportunities for all. We all need to recognise how gender has been impacted by the current and ongoing environmental crisis and how it has been exacerbated by this pandemic” says Ms. Corinna Pröll, Gender and Development Advisor, Austrian Development Agency (ADA). 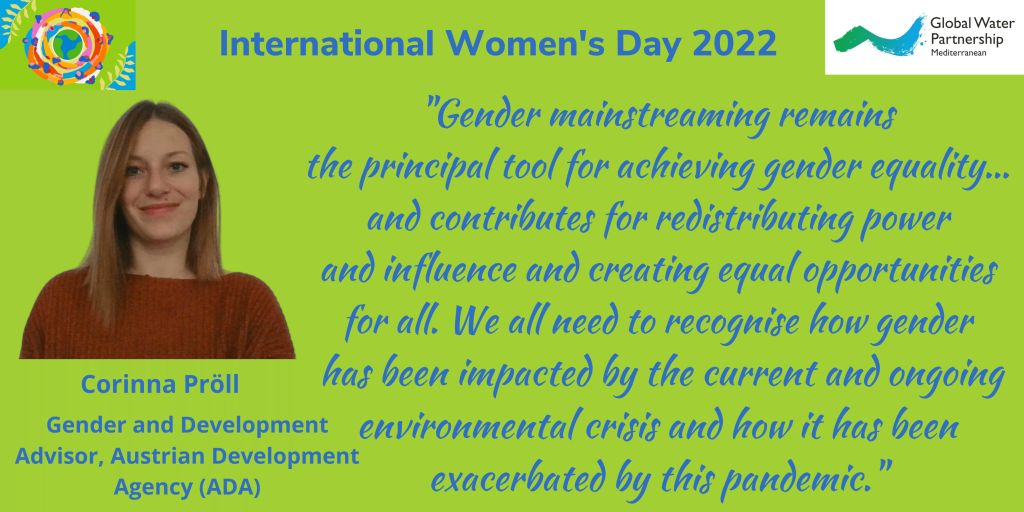 Drin riparians too have still a lot to do to mainstream gender especially in the nexus sectors. “Closing the gender gaps depends on enlightened government policies that take gender dimension into account and use innovative tools such as gender responsive budgeting. We must recognize the environmental change and that these changes are never gender neutral and neither should be the responses to them” emphasised Ms. Pröll.

Overall Drin basin countries still have to put specific efforts to address gender equality. As per the Global Gender Gap Index of the World Economic Forum gender equality has an uneven progress in the Riparian’s, with Albania being at a better position mainly due to women participation in decision making and holding the 25th place, North Macedonia holding the 73rd and Montenegro the 48th place out of 156 countries for closing the gap towards gender equality.

A lack of sex-disaggregated data and statistics is hindering efforts to work towards gender equality. It is difficult to bring about efficient change in policy when there is no data to back up the process. Without gender data, statistics often fail to capture a range of differences between women and men, including in the climate change impact, use and benefit from natural resources, the use of time, intra-household inequalities etc.

While some positive trends are shown in the region the main pressure to collect such data still comes from the international organizations rather than the institutions of the Drin Riparian’s. “More and more emphasis is given to gender sensitive data as requested mainly by international organizations, which is key to understand women and men perceptions, reactions and differences, but also how they can address specific situations based their perceptions, attitudes and actions” says Ms. Blerina Subashi, Research Analyst, at IDRA Research and Consulting, and previous Head of Statistical Department at INSTAT, Albania.

So, how to deliver water, energy, and food for all in a sustainable and equitable way, while preserving the health of natural ecosystems that form the basis of any economic activity? And how can we be effective as fast as possible, while lacking gender mainstreamed strategies and data? By initially increasing awareness, identifying innovative tools and approaches and regionally share knowledge and experiences through targeted networks that would push towards faster progress. This has been an important focus of GWP-Med interventions through its different projects in the Balkan region.

These efforts identified some best cases that were shared amongst the Drin Riparians and were promoted to be used by other countries that still have to progress in specific Nexus sectors. For example North Macedonia has advanced a lot in the development of sustainable policies and innovative tools for gender specific climate change resilience. “The country has now a national climate change platform - ‘klimatskipromeni.mk’- that can be accessed by anyone, while it is one of the countries with the most ambitious climate action plans” confirms Ms. Pavlina Zdraveva, ex-Manager, UNDP. She further informs that: “The gender journey for climate change started five years ago and the detailed map of activities were all prepared using a “gender lens”, which led to the development of a more solid Gender Action Plan. The mapping exercise proved once again the need to plan and obtain data, which we addressed by developing many innovative tools such as foresight, sensemaking and micronarratives, capturing the voices of youth and differences between women and men in addressing different issues and ensuring they are reflected in the policy documents developed within the projects”. 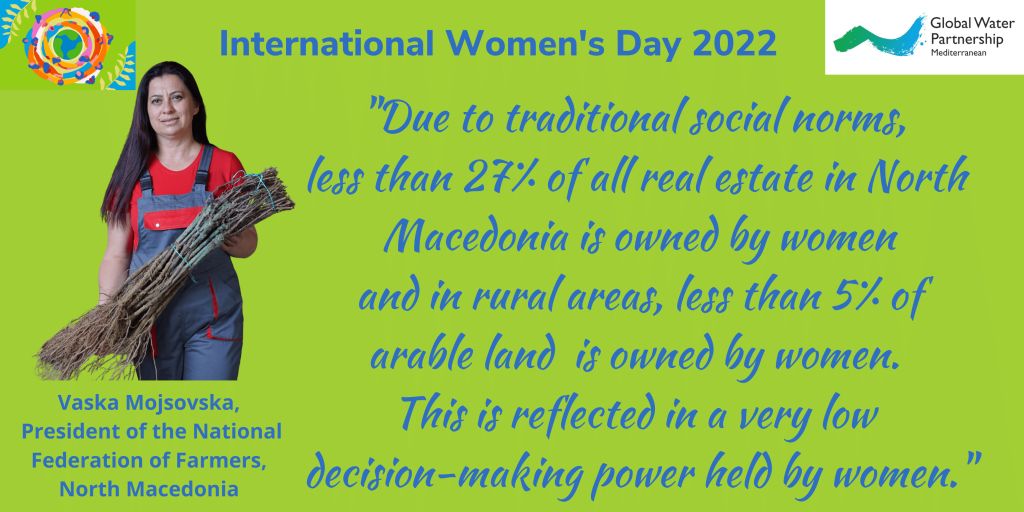 Climate change impacts women and men differently and this difference is deeply rooted on gender inequalities and discrimination with the most vulnerable and marginalized suffering the most. Women, especially female farmers, are increasingly being recognized as more vulnerable to climate change than men, as they constitute the majority of the world’s poor and are more dependent on natural resources, which climate change threatens the most. “Due to traditional social norms, less than 27% of all real estate in North Macedonia is owned by women and in rural areas, less than 5% of arable land is owned by women. This is reflected in a very low decision-making power held by women” says Ms. Vaska Mojsovska, President of the National Federation of Farmers, North Macedonia.

“Women are represented in the institutions and in civil societies organisations, but their participation and involvement in environmental action as individual, private citizens is unfortunately, almost non-existent” says Mervana Hadrović, the Aarhus Centre Coordinator. Aarhus Berane represents a link between the government and civil society, and it aims to promote inclusive decision making in environmental matters in Northern Montenegro. 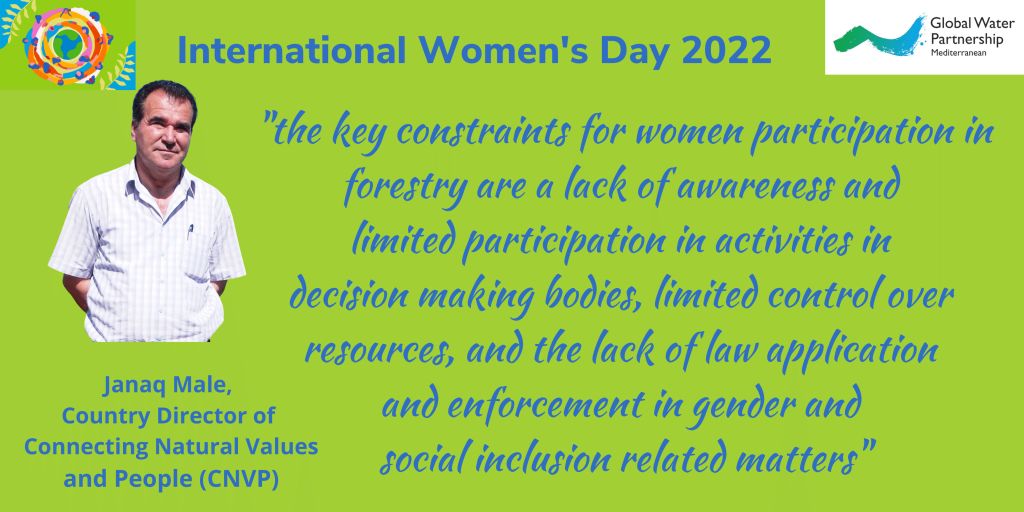 This is the case also in sectors like forestry where “the key constraints for women participation in forestry are a lack of awareness and limited participation in activities in decision making bodies, limited control over resources, and the lack of law application and enforcement in gender and social inclusion related matters” confirms Mr. Janaq Male, Country Director of Connecting Natural Values and People (CNVP). Typically, male gender roles are associated with tasks that deal with control of assets, mobility, and decision-making, while female gender roles typically involve manual labour for the collection of firewood, mushrooms, and forest fruits, which means that women have limited access to decision making. This division of roles makes “men the main beneficiaries of this industry, but instead women are the main stakeholders in forest-related activities for a sustainable forest management” explains Dr. Abdulla Diku, Forest Engineer in Albania. The traditional use of land, the patriarchal mentality, and inheritance customs and laws also represent a big problem together with the unsustainable use of forest and water, which all negatively impact on climate change. 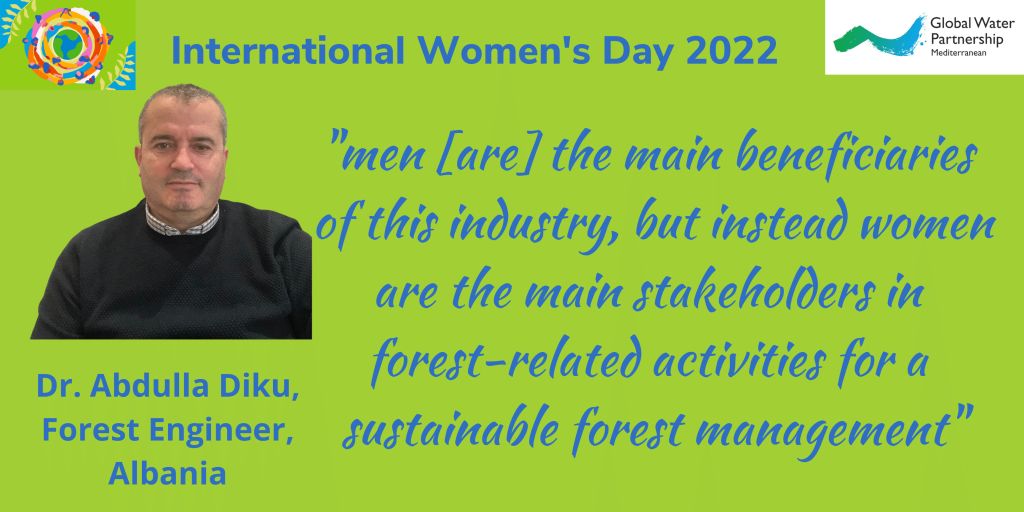 A place at the table

It is now clear that gender norms influence the impact of people on the environment, the impact of environmental degradation on people, and access to and use of natural resources. But without a place at the table, these impacts will not be visible and inclusive solutions will not be possible. “It is crucial to achieve gender equality at all levels. Some positive steps have recently been taken. For example, the Rules of Procedure of the Assembly of Montenegro are amended to require that at least one Assembly’s vice-president come from the less-represented gender. There is an increasing sense of common cause by the female members of the Parliament. This has resulted in the establishment of a Women’s MP Club involving representatives of both the ruling coalition and the opposition. Despite political differences among the members, the Club will propose concrete solutions to all issues related to gender, including in the executive branch of the Government” informs Dr Branka Bošnjak, Vice President of the Parliament and Co-chair of the Collegium of the Women’s MP Group of Montenegro. 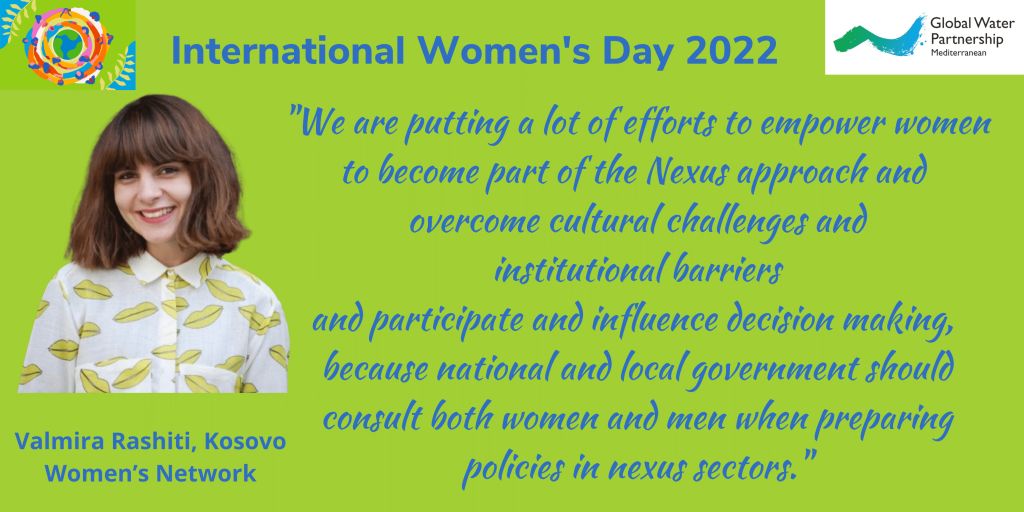 “We are putting a lot of efforts to empower women to become part of the Nexus approach and overcome cultural challenges and institutional barriers and participate and influence decision making, because national and local government should consult both women and men when preparing policies in nexus sectors” says Ms. Valmira Rashiti, from Kosovo Women’s Network.

In dealing with differentiated environmental and climate change impacts, it is essential to look at the decision makers shaping policies, because lack of equal representation persists in both national and local level in almost all Drin Riparians. But, according to research on policy making in the European Parliament, “women MEPs are more likely than their male colleagues to advance environmental protection initiatives[2]”. National-level studies also indicate that “women parliamentarians address environment-related topics more often than their male counterparts do[3]”.

So then, it should be everybody’s obligation and duty to continue examining the opportunities, as well as the constraints, to empower women to have a voice and be equal players in addressing climate change and sustainability. Because without gender equality today, a sustainable future, and an equal future, will remain well beyond our reach.

* This designation is without prejudice to positions on status, and is in line with UNSCR 1244/1999 and the ICJ Opinion on the Kosovo declaration of independence.

[2] Full article: Do women make a difference? Analysing environmental attitudes and actions of Members of the European Parliament (tandfonline.com)

[3] What 1.2 million parliamentary speeches can teach us about gender representation.