An online Learning workshop on Gender Equality (GE) and Sustainable Development in the Drin basin took place on 21 December 2020 with the participation of more than 55 representatives from gender related institutions, academia, civil society, youth activists and media from Albania, Kosovo* , Montenegro and North Macedonia.

The purpose of the Learning Workshop was to familiarise stakeholders from fields related to the Water-Energy-Food-Ecosystems Nexus with the basic concepts of gender equality, as well as the importance of gender mainstreaming in policy making. The Workshop also served as a platform for sharing related insights, exchanging policy-related experiences and identifying entry points and best practices from the Drin basin and beyond.

This learning workshop was organized by Global Water Partnership-Mediterranean (GWP-Med) in the framework of the SEE Nexus project (“Promoting the Sustainable Management of Natural Resources in Southeastern Europe, through the use of the Nexus approach”) financed by the Austrian Development Agency (ADA) and implemented by GWP-Med in partnership with the United Nations Economic Commission for Europe (UNECE). 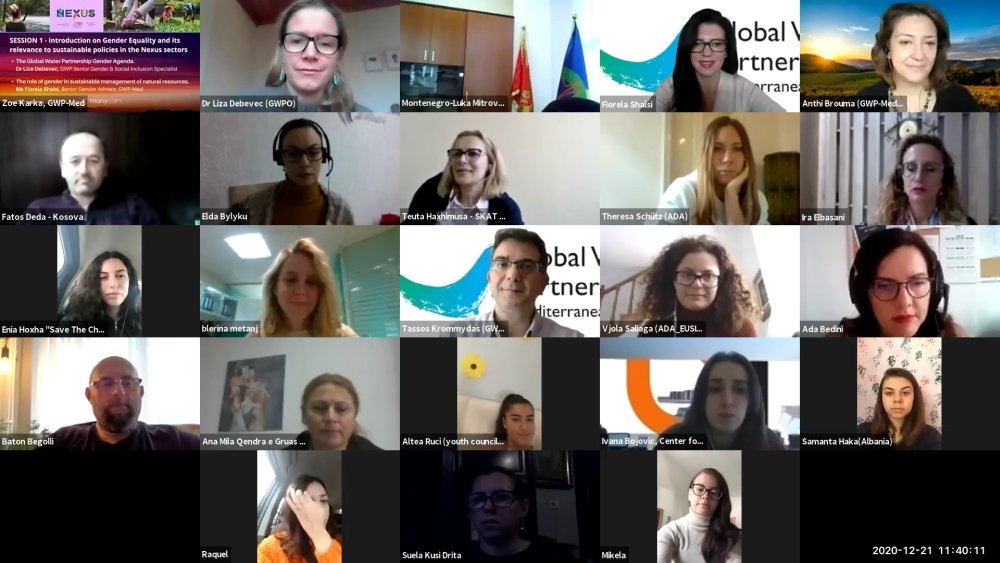 Participants were informed about important institutional developments in the Drin riparian countries relating to gender equality. Several international conventions have been ratified and parliaments have committed to gender equality through national legislation: they have ratified CEDAW and other international conventions, are all committed to EU accession processes and aim to align their legislation with EU directives, have adopted Gender Equality Law or Antidiscrimination Law, have developed Gender Equality Strategies and established gender machineries, or have mechanisms in place and a number of other steps that claim the government’s commitment towards gender equality.

In terms of the practical application of these conventions, the workshop identified some priority areas where progress has taken place, however it was highlighted that some of the Nexus related sectors lag far behind, with little or no progress made. As a first step in addressing gender issues in these sectors, information needs to be disseminated on the importance and on the barriers and opportunities that support gender equality agenda and accelerate progress towards sustainable development.

The workshop introduced the overall objectives of the SEE Nexus project and its gender-related aspects, and explained how the adoption of a gender transformative approach in the GWP influences the organisation’s work. A dedicated presentation focused in detail on the role of gender in sustainable management of natural resources and a separate one presented concrete steps undertaken by a local project in Albania on ‘Gender, rural development and sustainable forestry’.

In the interactive part of the workshop, participants were divided in working groups where they were given the opportunity to identify main challenges, successes, relevant actors and propose actions for future interventions in this area. Discussion focused on the immediate need to increase knowledge and awareness of these issues in Nexus related sectors, given that there is little to no understanding on how gender issues can be mainstreamed, monitored or reported. The lack of disaggregated data and analysis is a barrier present in almost all of sectors and different actors need to undertake relevant actions, at least in increasing collection of disaggregated data.

The event closed with sharing information on follow up steps and the announcement of in depth gender workshops that will take place in the spring of 2021 in the context of the SEE Nexus project’s activities in the Drin and Drina river basins.

The SEE Nexus Project (“Promoting the Sustainable Management of Natural Resources in Southeastern Europe, through the use of the Nexus Approach”) is funded by the Austrian Development Agency (ADA), the operational unit of Austrian Development Cooperation and is implemented by Global Water Partnership-Mediterranean (GWP-Med) in partnership with the United Nations Economic Commission for Europe (UNECE).

GWP-Med Gender in the Sustainable Management of Natural Resources