More than 140 decision makers and representatives of government, civil society, international organisations, donors, financing institutions, and the private and banking sector, came together for 3 days sharing experiences and discussing needs, challenges and next steps during the “Conference on Water Governance in MENA and wider Mediterranean region” that was held in Barcelona, on 12-14 December. The Regional Conference was organised under the auspices of the Union for the Mediterranean (UfM), by two UfM-labelled projects supported by the Swedish International Development Cooperation Agency (Sida), namely the Governance & Financing for the Mediterranean Water Sector project led by GWP-Med, and the Regional Water Integrity Capacity Building Programme in MENA, led by SIWI UNDP Water Governance Facility. The Conference was organised in close and strategic synergy with the EU-funded Sustainable Water Integrated Management and Horizon 2020 Support Mechanism (SWIM-H2020 SM) regional project.

The three-day Conference, hailed as timely and much needed by the participants, took stock of the outcomes of the two co-organising projects -as well as of SWIM-H2020 SM’s ongoing work- and of how they have tangibly contributed towards overcoming challenges relating to Water Governance & Financing as well as Water Integrity in the region. Recommendations for further lines of work and next steps were also discussed and agreed upon during the 3rd day of the Conference. 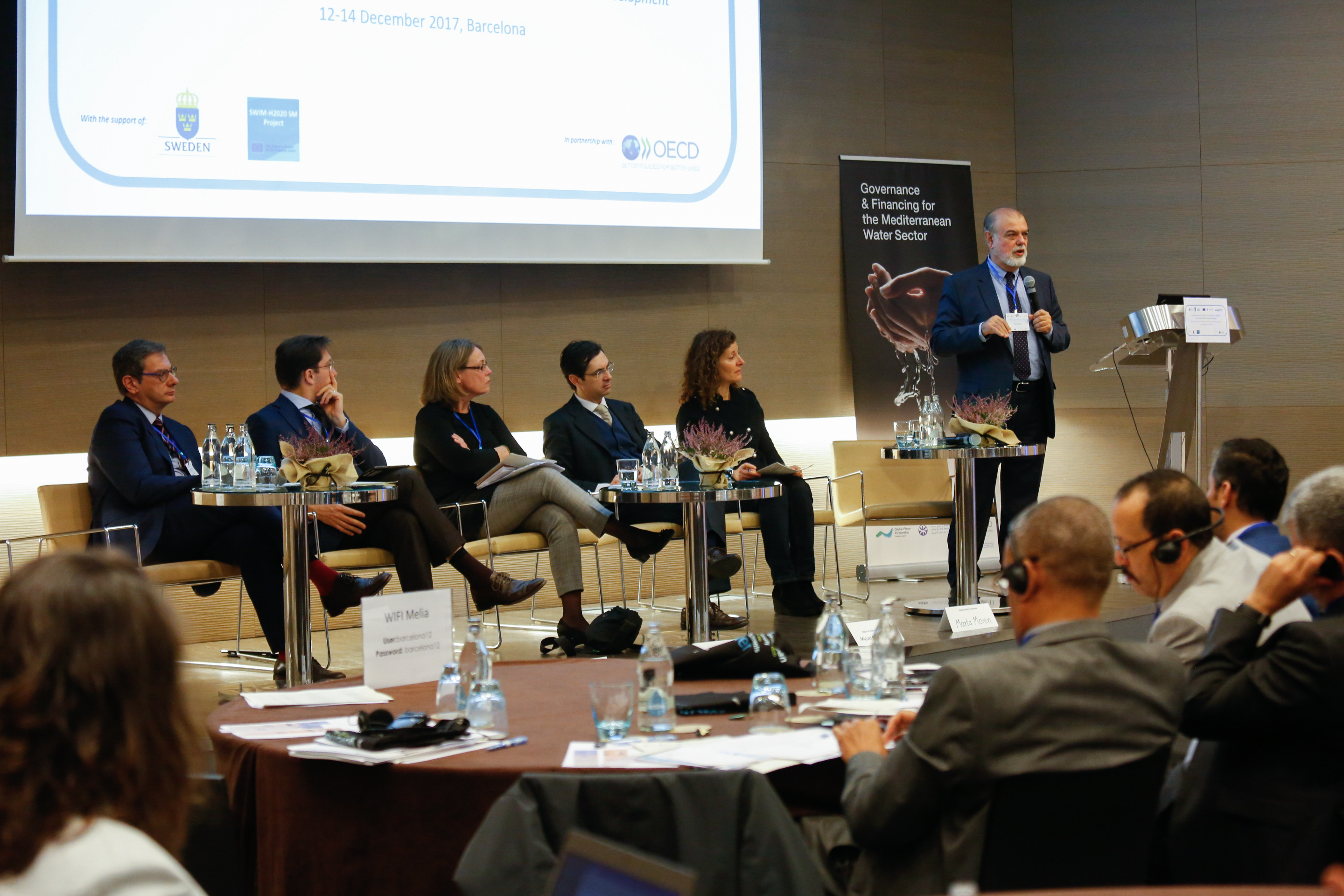 The Conference opened with representatives from the UfM Secretariat (Miguel García-Herraiz, Deputy Secretary General, Water and Environment Division), Sida (Esse Nilsson, Senior Programme Manager) and the European Commission(Marta Moren-Abat, Policy Officer, DG Environment) welcoming the results of the projects and their contribution to the region’s stability and prosperity. Representatives of the institutions leading the projects (Michael Scoullos, Team Leader, SWIM-H2020 SM; James Leten, Programme Manager, SIWI; Vangelis Constantianos, Executive Secretary, GWP-Med) then provided brief welcoming remarks on the key challenges facing the region with regard to the issues addressed by the Conference and the work of the respective projects.

The first day of the Conference was devoted to finance-related dimensions of Water Governance. In the first session, representatives from Lebanon, Tunisia and Palestine reflected on how the national dialogue processes under the ‘Governance & Financing’ project have contributed to sectoral developments and stakeholder commitments in their countries. Representatives from Morocco and Albania (countries not directly involved in the project) provided inputs on the current status of Water Governance in their countries,  challenges they face and the relevance and potential replication of the project’s methodology in their specific national contexts.

The second session focused on how PPPs in the water sector could be enhanced and how the regulatory framework could contribute in that direction. Representatives of ministries, regulatory agencies and utilities from Egypt, Lebanon, Morocco and Tunisia shared their experience and perspectives.

Cross-cutting issues that often remain in the shadow of the mainstream discussions on water governance were tackled during the third session. Experts and representatives of regional civil society organisations provided their insights on issues like the gender dimension of water governance, the access of deprived groups and communities to water services, the opportunities for renewable energy in the water sector and the benefits from a nexus approach, the role and potential of Corporate Social Responsibility (CSR) and the importance of Non-Conventional Water Resources (NCWR).

The first day of the Conference concluded with a session on how to boost water investments in the region, which contained two consecutive panel discussions: one among private sector, international financing institution and government representatives and one among representatives of Commercial Banks and Association of Banks from MENA countries. 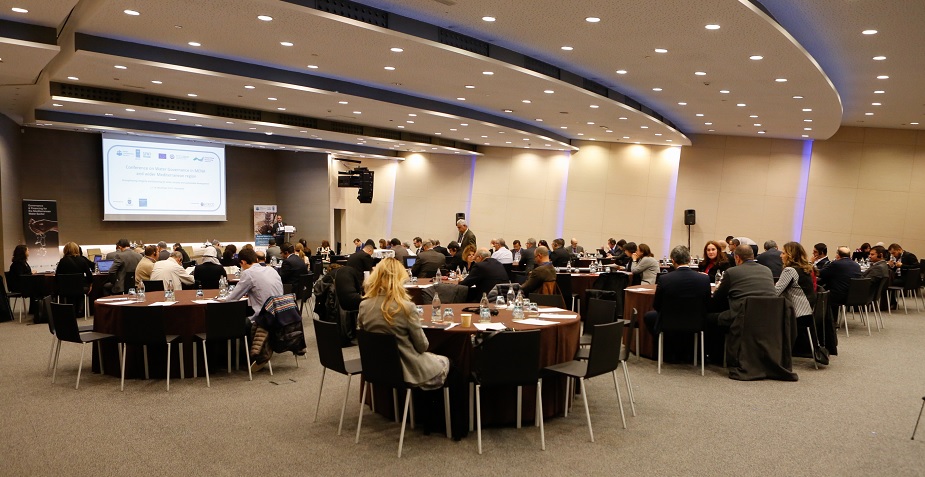 The second day of the Conference was devoted to integrity-related dimensions of Water Governance. The first session set the scene with presentations from representatives of international organisations on the interlinkages between the 2030 Agenda and water governance, accountability and integrity management at the utility level, and collective action as a cornerstone for enhancing integrity.

The second session focused on examples to advance transparency and accountability in water governance. Presentations on the issue included the role of the Regulatory Agencies, the case of Jordan, the role of civil society and the importance of stakeholder engagement.

After the lunch break, and during the third session of the day, 25 mentees from Lebanon, Tunisia, Palestine, Morocco and Jordan that were trained under the Water Integrity Capacity building programme (2014-2017), presented the Water Integrity Action Plans they have developed.

The fourth and last session of the day began with a keynote speech on how human communities solve governance problems. It was followed by a facilitated panel discussion on how integrity can be a collective action solution towards good governance, with the participation of representatives from authorities and institutions from Lebanon, Tunisia, Jordan, Egypt and Morocco. 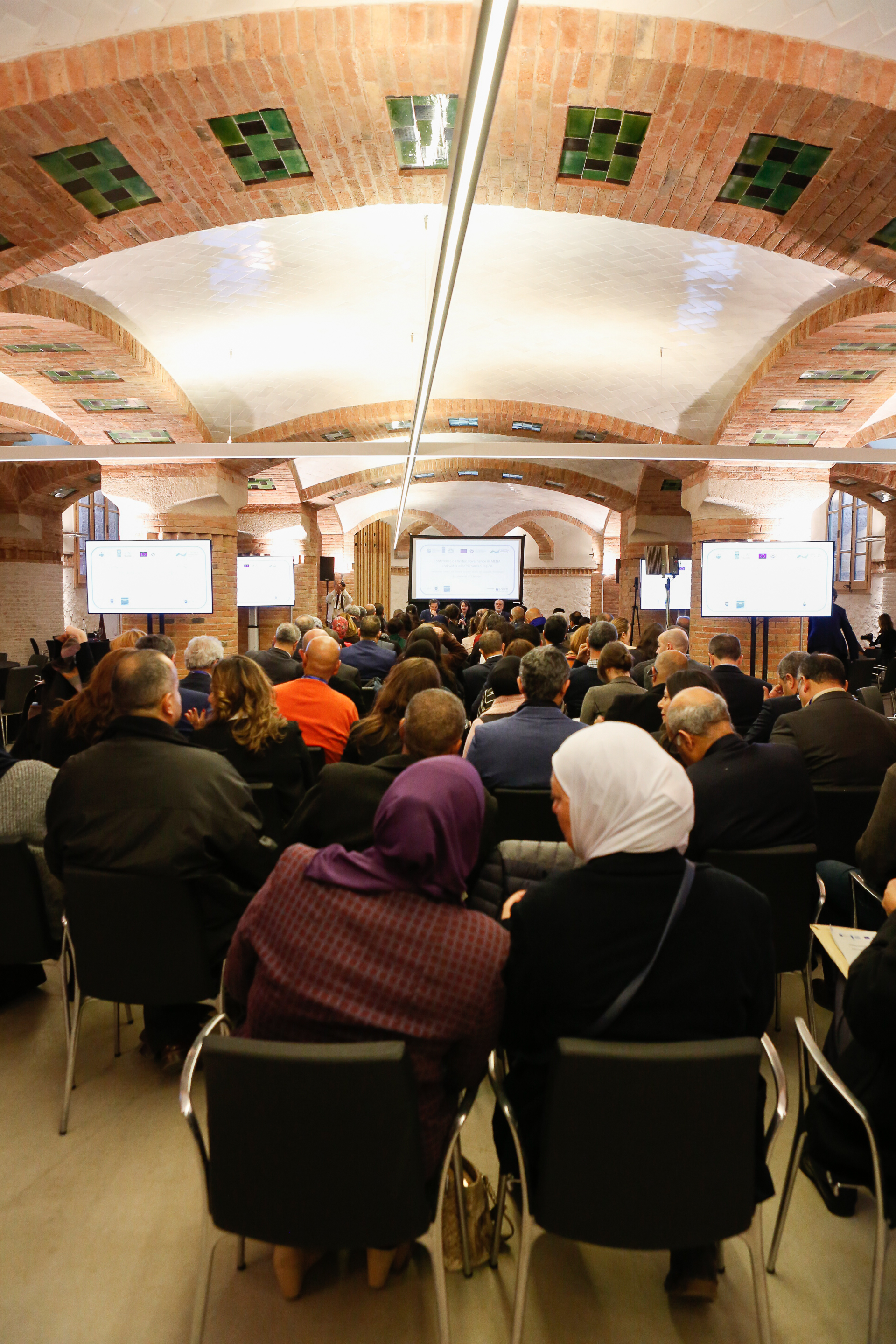 For its third and last day, the Conference was moved from the Meliá Barcelona Sarrià Hotel to the premises of the Sant Pau Recinte Modernista Barcelona, a declared UNESCO World Heritage site.

The day started with a brief overview of the proceedings from Days 1 & 2 of the Conference.

It was followed by a participatory and highly interactive Working Group Session aiming to directly benefit from the expertise and knowledge of the attendees and explore strategic orientations on the way forward regarding the sustainable water financing and water integrity agendas in the MENA region. Participants were split into 5 groups, each to elaborate on recommendations to be addressed respectively to the following stakeholder categories:

The working group session concluded in plenary, with the facilitators of all sub-groups providing a brief 3-minute overview of what was discussed during the working sessions including the 3 key recommendations.

The penultimate session of the Conference included a panel discussion among senior representatives of regional institutions who provided their insights on options and priorities on how to best capitalise on the work and findings of the projects and commenting on the recommendations of the working groups.

The closing session started with the presentation of the draft Statement of the Conference to the plenary. The draft text:

The Conference concluded with a celebratory panel exchange, moderated by the UfM Secretariat, in which high-level representatives from the governments of Jordan, Tunisia, Morocco and Libya shared perspectives on lingering challenges and the way forward regarding the governance, integrity and sustainable financing of the water sector in the MENA and wider Mediterranean region.

The Conference has provided a new stimulus for going forward with a clear request for the UfM to be even more engaged and operational in its support to the countries and the encouragement of targeted lines of work, like the Conference’s co-organising projects, to continue supporting the governance of the water sector in the region.

The draft Conference Statement, including 2-3 bullet points as recommendations from each of the working sessions held during the last day, was shared electronically with all participants in early January for finalisation and validation. The final Statement was then presented to the SWIM-H2020 SM 2nd Steering Committee Meeting (31 January 2018, Dead Sea, Jordan) and the UfM 8th Water Expert Group meeting (1-2 February 2018, Amman).

More information about the Conference, including related material, can be found in the right-hand column. The detailed proceedings of the Conference will become available shortly. 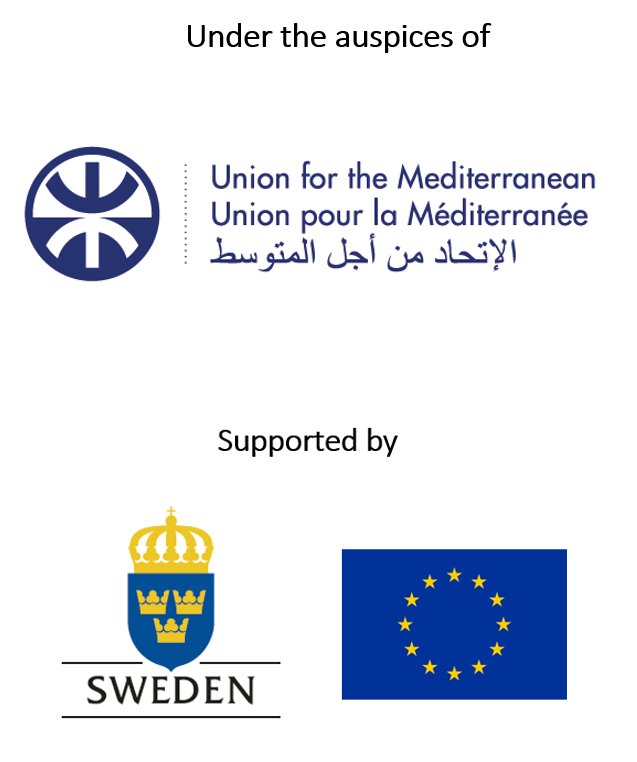 Click on the images to learn more about each project: 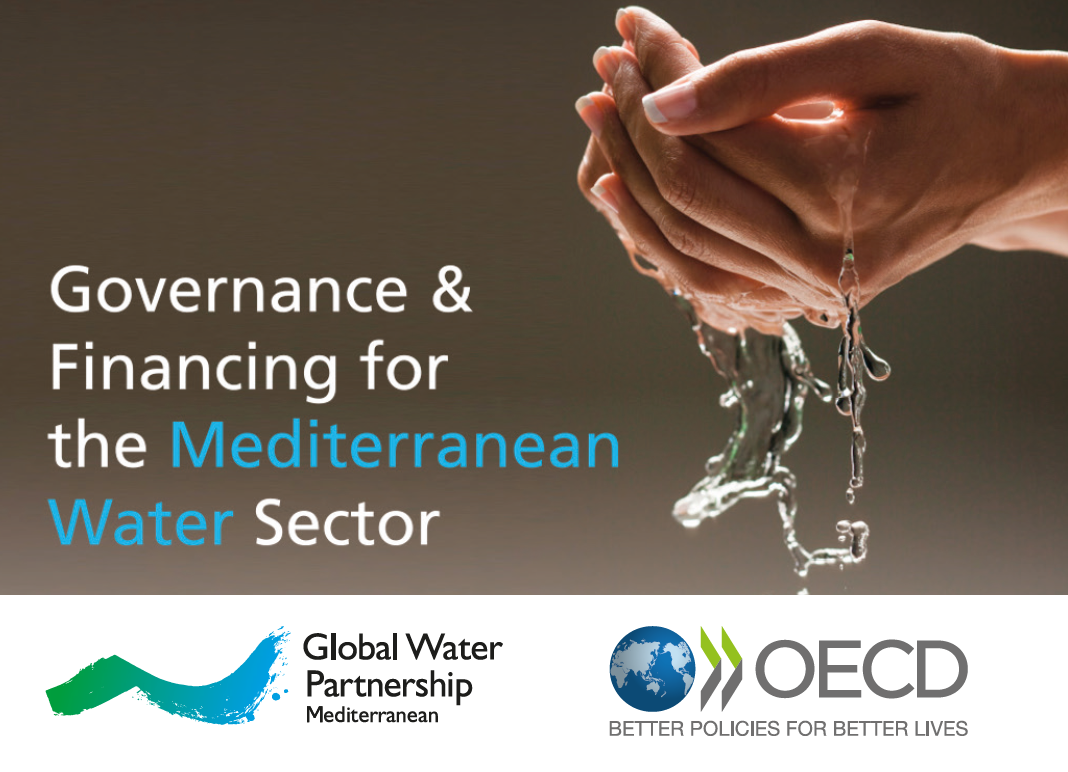 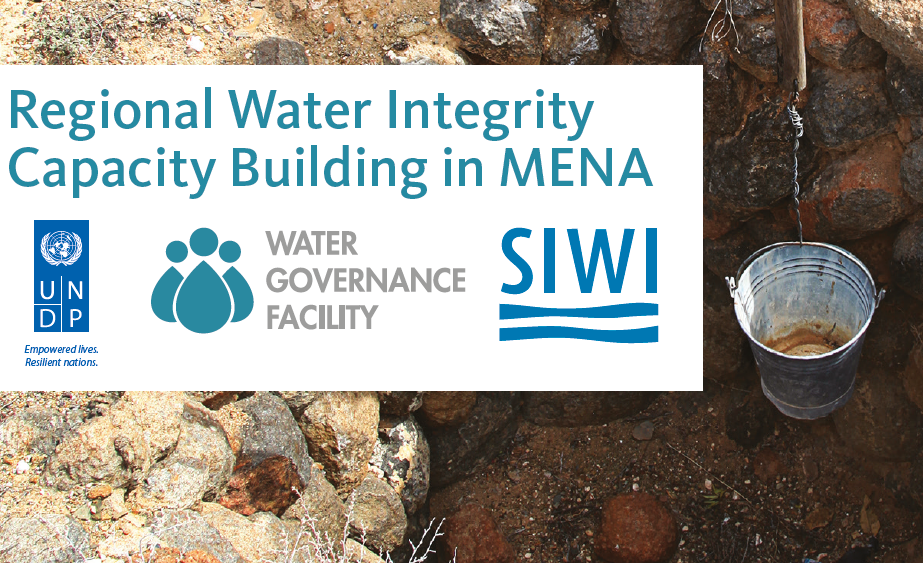 Conference organised in synergy with: