The 20th Meeting of the High Level Experts and Leaders Panel on Water and Disasters (HELP) was held as part of the pre-event at the G20 17th meeting.

The 2022 G20 Heads of State and Government Summit is the upcoming seventeenth meeting of the Group of Twenty (G20), a summit scheduled to take place in Bali, Indonesia on 15-16 November 2022. The Summit also incorporated the pre-event for the 20th meeting of the High-level Experts and Leaders Panel on Water and Disasters (HELP), held from 9 – 11 November 2022.

During the session keynote addressed by HELP members, GWP Chairman, Mr Pablo Bereciartua delivered a Keynote with the title ‘We need to switch from mitigation to adaptation mode and deal with the new normal’. As GWP Chair he noted in his opening remarks, “If we don’t move quickly into “adaptation mode”, the world as we know it today is not going to be there in the future, with a huge impact on the more vulnerable people, developed and developing economies and nature.”. To the country leaders presented in the meeting, he described that adaptation is mainly about water because climate change is the driving force behind the extremes and uncertainty in the water cycle.

In providing the context of the ‘new normal’, Mr Pablo Bereciartua highlighted ‘valuing water’ as it means aligning behaviours and inducing investments. However, this also means that we have to move to the IWRM 2.0, and focus on a better governance model. This is including the inclusion of the private sector, fostering entrepreneurship, and supporting engineers that can deliver innovation in the technology. He underlined the need to work together and GWP as the global network has the capacity for convening the other stakeholders into the adoption and implementation of IWRM during the closing statement.

The session also paid special attention to the flood in Pakistan where Dr.  Pervaiz  Amir, an expert from GWP Pakistan alerted high level leaders to the situation on the ground.

At the same event, Ms. Louise Desrainy, Deputy Regional Coordinator for GWP-SEA also presented the “Update on the Integrated Water Security Open Program (Open Program)”, during the session Advancing 7 HELP Flagship Initiatives. The Open Program has been nominated as one of the HELP flagship program. 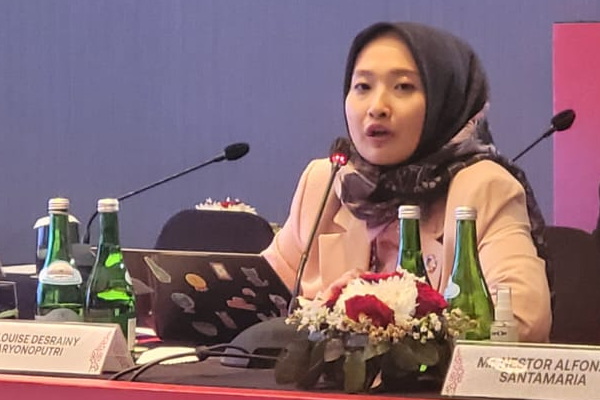 Derived from the issue of working in silos in the water sector, GWP-SEA has been working on the proof of concept stage of the Open Program. GWP-SEA initiated a Regional Workshop on the Open Program on 14 September 2022. Regional and global leaders who gave testimony in working in silos as emphasised by Louise Desrainy, ‘that working in a silo has an enormous impact through redundance of policy in different water sectors, overlapping of actions and conflict of interest between different actors in a certain area of program.’ She also highlighted the OECD and ADB’s Water Development Outlook 2020 reports that mentioned the limited mechanism for stakeholder engagement is still present and the accountability gap is also hampering the process of stakeholder engagement, which is generally low in Asia and the Pacific region.

In another part of the presentation, Ms Louise Desrainy also shared the progress of the Open Program. Currently country roadshow has been done in Indonesia through the event “CUT THE TOSH” Collaboration Summit, initiated by the Indonesian Chamber of Commerce and Industry (KADIN), Heineken Indonesia, and GWP-SEA, held on 18 October 2022. The Open Program also discussed during the 22nd ASEAN Working Group on Water Resources Management. By the end of year, GWP-SEA plan to collaborate with GWP Indonesia to have an introductory workshop for government institution, follow by roadshow to the country of Philippines and Malaysia on February 2023. Furthermore, in the occasion of the GWP’s youth flagship program WAY, the Open Program has been introduced and we expected to have a Youth Collaborator learning Exchange by Quarter 1 2023. (AW).