An online Technical Workshop on Gender Equality (GE) and Sustainable Development in Nexus sectors in Albania took place on 29 June 2021 with the participation of more than 50 representatives from gender related institutions, gender focal points from gender-related institutions, civil society, youth organizations and women empowerment activists and experts from Albania.

The purpose of this technical workshop was to initiate a coordinated discussion, share knowledge and raise awareness on the importance of mainstreaming gender equality in Nexus sectors and overall for sustainable development. It also aimed to inform and discuss how gender is addressed in sectors’ strategies and policies and bring some concrete best practices on how gender issues can be addressed in development programmes.

This technical workshop was organized by GWP-Med in the framework of the SEE Nexus project financed by the Austrian Development Agency (ADA) and implemented by the Global Water Partnership-Mediterranean (GWP-Med) in partnership with the United Nations Economic Commission for Europe (UNECE).

Participants were greeted by the Senior Gender and Development Advisor of ADA, Ms. Christina Stummer. She noted that gender equality and women’s empowerment is a long-term key topic on the agenda of ADA, not only as a basic human right issue, but also as highly relevant to sustainable development. Ms. Stummer emphasized that gender is one of the focus points in the Nexus approach and she went on to add that special attention needs to be given in gender mainstreaming in the day-to-day management of programs and the development of respective policies so that gender stereotypes are tackled, and inequalities are adequately addressed. Ms. Stummer recommended to use EU GAP III as a tool to identify relevant targets and indicators for the Albanian Nexus policies to be gender mainstreamed, which also would help in collecting relevant data and measure gaps and progress.

During the first session the participants were introduced to the basics of the Nexus approach as well as the overall objectives of the SEE Nexus project and its activities in Albania. It was also explained how the adoption of a gender transformative approach in the GWP influences the organisation’s work. The following presentations focused on the importance of gender in the sustainable management of natural resources, and the current status and progress in Albania with regard to gender equality. Further, the participants were informed on how the strategies and policies in nexus sectors have reflected gender issues. 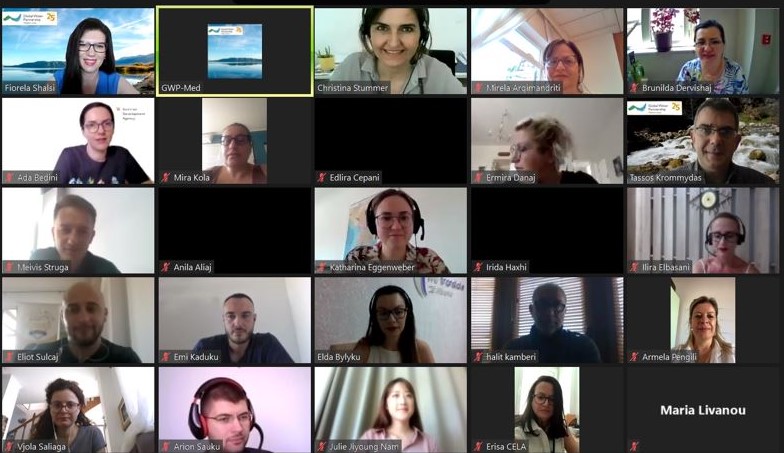 The second session was focused on discussions and presentations by the panelists on different important aspects on mainstreaming gender in Nexus sectors. The Director of the Strategies and Policies for social inclusion and gender equality in the Ministry of Health and Social Protection, Ms. Brunilda Dervishaj emphasized that the gender mainstreaming in the Nexus sectors in Albania is very important, but it shall be noted that work in this direction is still in its very initial steps so the impact that might be demanded will not yet be there. It is the first time that the new National Strategy on Gender Equality 2021-2030 has included some of the Nexus sectors that were blind or neutral with reference to gender equality. EU GAP III was also considered while setting some initial objectives on environmental protection, climate change, digitalizing and green economy. Ms. Dervishaj underlined that more support is needed in these areas to address gender mainstreaming, which is still far from a gender transformative approach.

The session then proceeded with a number of discussions and presentations on the importance of gender mainstreaming in Nexus sectors considering a number of key elements to ensure its impact, such as women participation at different levels but especially at the local level, budget, protection from discrimination and tackling of stereotypes, the key role of gender related institutions, civil society, gender activists and experts as well as academia in collecting and analyzing data in these sectors and advocating for the necessary changes towards progress of gender equality in Nexus sectors.

The final session enabled the participants to share and hear some very interesting, best cases on how different national and international organizations have mainstreamed gender issues in their programme development together with the collected information and achieved results.

At the closure of the workshop the participants were informed on the next steps for the preparation of the Nexus assessment which will highlight their contribution and other relevant information as it will be shared by key stakeholders in these sectors.

For more on the Workshop see here

The SEE Nexus Project (“Promoting the Sustainable Management of Natural Resources in Southeastern Europe, through the use of the Nexus Approach”) is funded by the Austrian Development Agency (ADA), the operational unit of Austrian Development Cooperation and is implemented by Global Water Partnership-Mediterranean (GWP-Med) in partnership with the United Nations Economic Commission for Europe (UNECE).