During the 2nd Nexus Consultation meeting for Albania, stakeholders discussed the main outputs under the ADA-funded SEE Nexus Project, as well as the concrete Project proposals being prepared to demonstrate the benefits of interventions that capture synergies across sectors.

The 2nd Nexus Consultation meeting for Albania, held online on 17 June, gathered approximatly 35 stakeholders among which were  Mr. Gjergji Simaku, Deputy Minister of Infrastructure and Energy and Ms. Ornela Cuci, Deputy Minister of Tourism and Environment. The meeting’s main purpose was to present and encourage discussion on the project’s main outputs for Albania and specifically, the draft Nexus Assessment Report, an outline of a “Nexus Roadmap” and the Project Documents for the specific Nexus interventions.

In her welcoming remarks, Ms. Cuci, noted that the government is in the process of updating the National Strategy for Development and Integration -a key strategic document of cross-sectoral relevance- following up on the finalization of sectoral strategies in the past years. She also noted that Albania is transposing EU legislations to meet the requirements under the environmental Chapter 27 of the EU accession process, while also planning to implement the Green Agenda for the Western Balkans. She welcomed the findings of the Nexus project underlining that this and other relevant projects are assisting Albania in the development and implementation of the above strategies and agendas.

Mr. Simaku, stressed the critical relation between water and energy in Albania, as hydropower is the primary source of electricity. He noted that Albania with the recent National Energy and Climate Plan is moving towards reducing the impact of electricity production on water resources and the environment and underlined that addressing together electricity production and environmental protection is a key issue for policymakers in the energy sector. 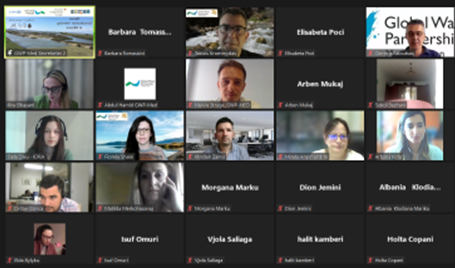 Mr. Arduen Karagjozi, Director      of the Water Resources               Management Agency (AMBU)       underlined the importance of the  Nexus approach recalling     AMBU’s initiatives for cross-sectoral coordination since   2014.  He noted that projects such as the SEE Nexus Project provide a very good example of the need for coordination between different institutions and actors in creating synergies as well as reducing conflicts for the management of water resources.

Ms Sarangoo Radnaaragchaa Regional Advisor on Environment from UNECE and Mr. Dimitris Faloutsos, Deputy Regional Coordinator GWP-Med, in their welcoming remarks recalled the organisations’ recent related initiatives in the Region and stressed the importance of the implementation of Nexus solutions that will have substantial benefits for the local communities, boost synergies among institutions and ultimately have a positive impact for the entire country.

Mr. Meivis Struga, Programme Officer at GWP-Med, then presented the key findings from the Nexus Assessment Report that was developed under the Project. The Assessment mapped the current status in the Nexus sectors in the country, assessed the cross-sectorality in policy and institutional frameworks, identified cross-sectoral interlinkages and explored in more detail 3 key ones.

Mr. Tassos Krommydas, Senior Programme Officer at GWP-Med firstly gave a brief overview of the project’s activities in Albania as well as in the Drin basin. He then presented the suggested “Nexus Roadmap” prepared in the framework of the Project. It is a framework to facilitate a more integrated and coherent approach across sectors in the design and prioritisation of management practices, policy and regulatory frameworks, and investment and infrastructure planning. It is structured around 8 objectives and suggested main lines of action to achieve them, stemming from the findings of the Nexus Assessment. 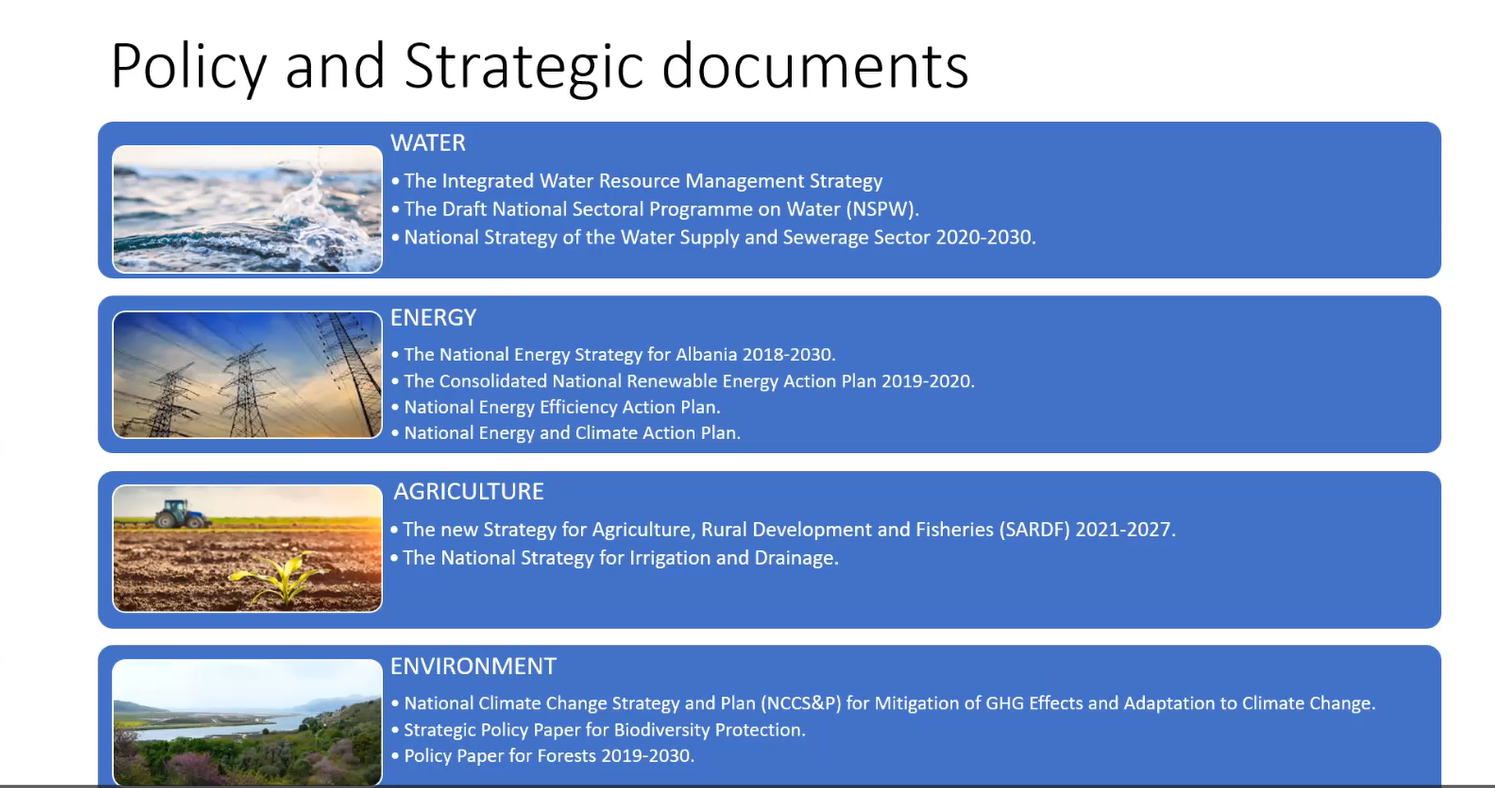 In the discussion that followed, participants welcomed the findings, shared perspectives and insights and in principle approved the Outline of the Nexus Roadmap.

In the next session of the meeting, consultants presented the progress in the development of Project Documents -again in the framework of the SEE Nexus Project- for 3 specific Nexus-related interventions with cross-sectoral benefits.

These interventions were on:

Finally, the role of gender equality in the sustainable management of natural resources in Albania was highlighted in a presentation by Ms. Fiorela Shalsi, Senior Gender advisor for GWP-Med. She noted that Albania has made significant improvements in advancing the normative framework for gender equality, however, Nexus sectors have little focus on gender dimensions in their strategic frameworks.

The presentations given during the Meeting are available at the box on the righ-hand side of the page.

The project “Promoting the Sustainable Management of Natural Resources in Southeastern Europe, through the use of the Nexus Approach” is funded by the Austrian Development Agency (ADA), the operational unit of Austrian Development Cooperation and is implemented by Global Water Partnership-Mediterranean (GWP-Med) in partnership with the United Nations Economic Commission for Europe (UNECE).